RCAF 1 Wing (Marville) station crest.
runway: 12/30 - 2900x..meters/9517x150feet - concrete (CLOSED)
runway: 12/30 - 2500x..meters - concrete
Air field Marville-Montmédy (french: Aerodrome de Montmédy-Marville, also known as RCAF Marville, also known as Base Aérienne Marville-Montmédy) was an airfield in the Lorraine region in northern France.
The location of the base and the orientation of the runway were announced by the Canadian and French authorities during the summer of 1952. The 315 hectares (780 acres) of land required for construction of the base were purchased for C$290,000. The base was expected to house nearly 150 officers and 1000 enlisted men. Construction of the runway began in October 1952, and eigth months later a runway of 2400meters (7900feet) was completed. North of the runway an additional plot of 14 hectares (34 acres) was acquired for an ammunitions depot. In 1956 the runway was extended to 2700meters (8900feet).
A parallel taxiway which could double as an emergency runway was built parallel to the runway at 2164meters (7100feet). 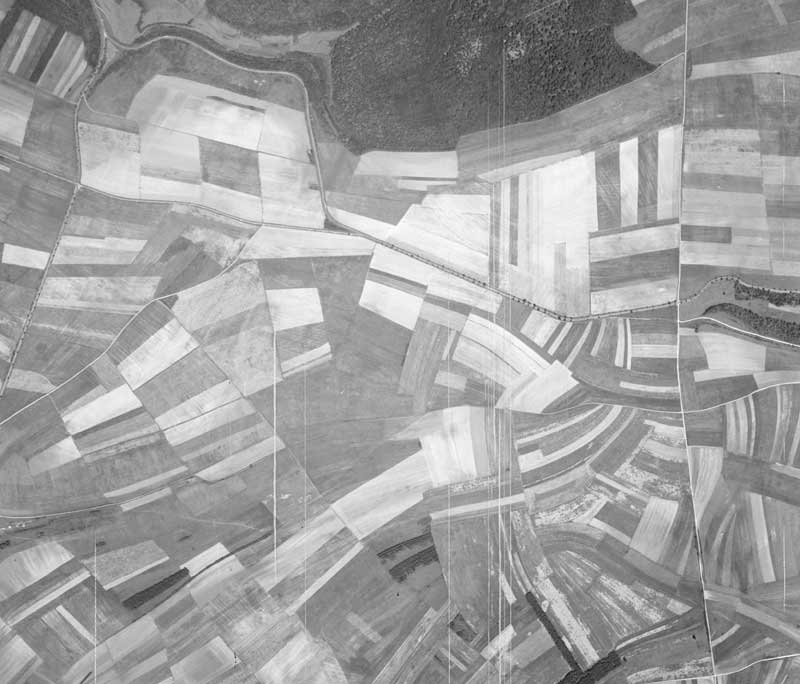 The location of what was to become RCAF Air Station Marville in July 1950 (IGN, via Géoportail) 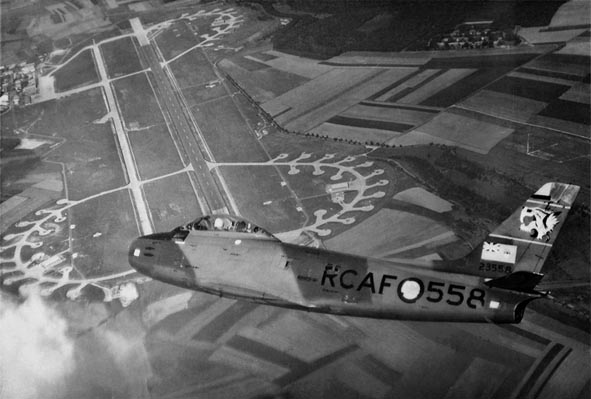 Sabre Mk.5 '23558' overflying RCAF Marville.
In April 1955, 1.Wing/1.Escadre Royal Canadian Air Force, stationed at RAF North Luffenham in England since February 1952, moved onto the base. The Wing consisted of three squadrons flying the Sabre Mk.5 : 410, 439 and 441 Squadrons.
410 and 441 Squadron left RAF North Luffenham in 1954 for temporary bases in Germany: Baden-Söllingen for 410 and Zweibrücken Air Base for 441 Squadron. 439 Squadron moved directly into Marville in 1955. 410 Squadron disbanded at Marville on 2 October 1956, and was replaced by 445 Sqn, flying on the CF-100 Canuck. The replacement squadron was in turn dissolved 31 December 1962 however.
The 439 and 441 Squadrons changed aircraft in 1962 to spend their time on the new supersonic CF-104 Starfighter. The CF-104 supported Canada's new and controversial nuclear strike role since it could be equipped with nuclear weapons, but the Starfighter also had a reconnaissance role. So, with the change in aircraft the Marville squadrons changed their mission from solely air defense to tactical nuclear strike and reconnaissance. 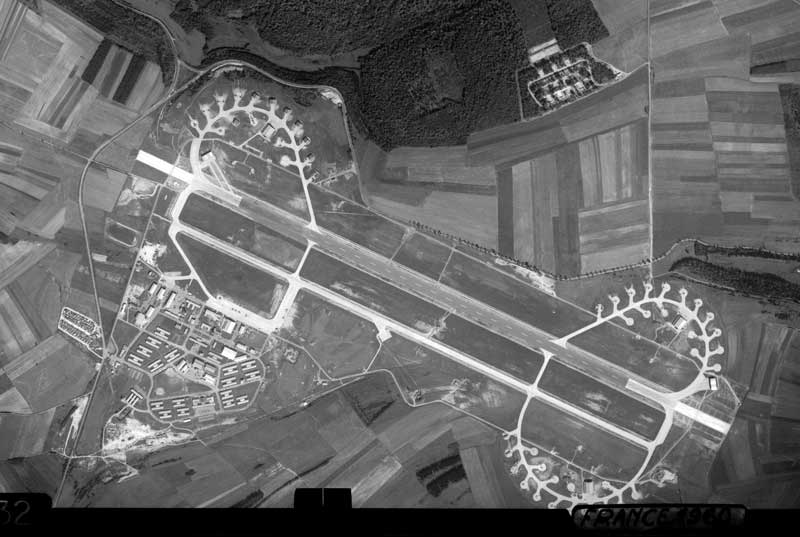 RCAF Air Station Marville in September 1960. On the original high resolution photo the airfield is occupied by Sabres (eastern marguerites), CF-100s (nothern marguerite) and a mix of CT-133s, Sabres and a single C-47 on the platform (IGN, via Géoportail) 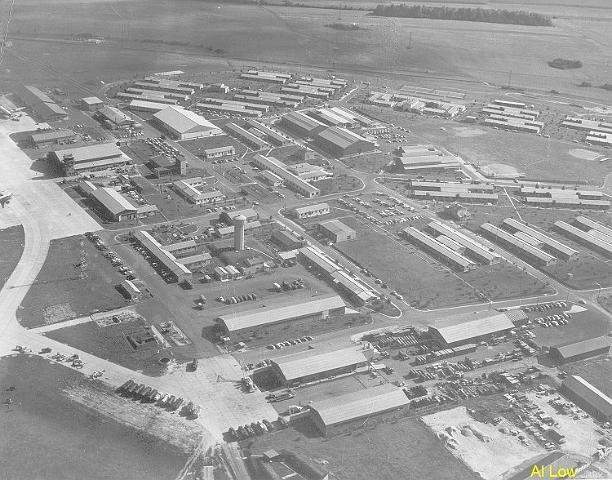 Overview of the logistics and support site at RCAF Marville (rcaf-airdivisionreunion2011.ca). 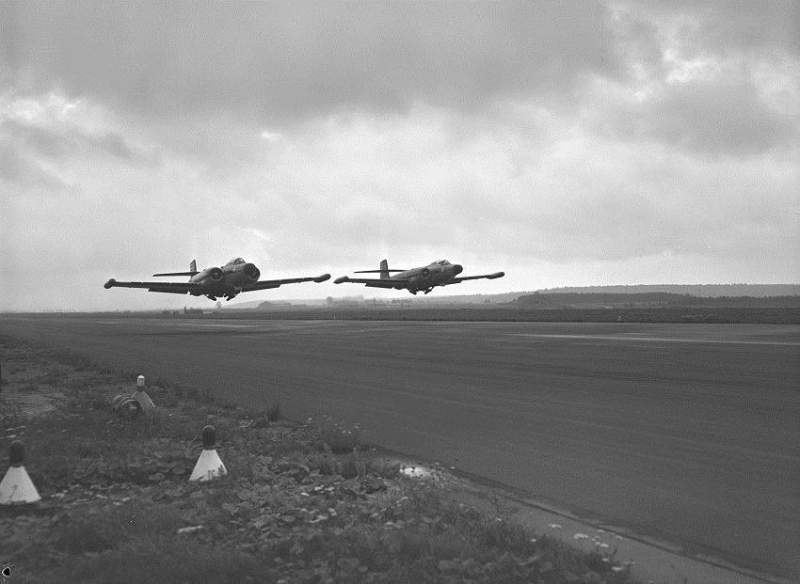 A pair of 445Sqn CF-100 Canucks taking off from Marville for a mission in the winter of 1962 (Photo from the now defunct www.marville.org). 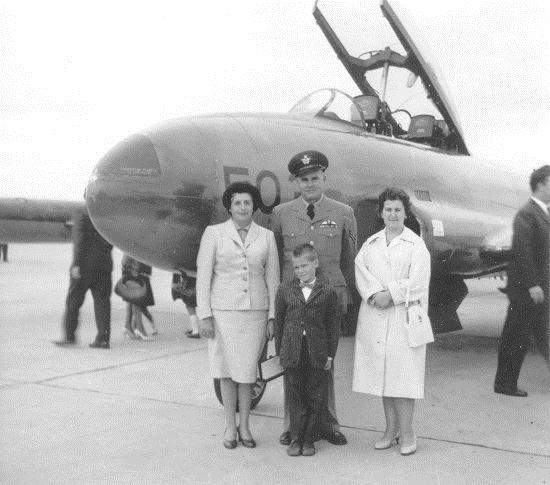 A Canadian NCO posing with friends in front of RCAF CT-133 trainer '21503'. This particular aircraft was transferred to the Turkish Air Force in early 1974, where it flew as 54-21503. (Photo from the now defunct www.marville.org).
In 1963 the French government demanded that all nuclear weapons and delivery vehicles stationed in France were to come under the command of France. This meant a new change of mission came about for the two squadrons of 1.Wing/1.Escadre Marville. Obviously the French demand was unacceptable to the RCAF, so from that date, they devoted themselves to reconnaissance missions only.
In March 1966, General de Gaulle announced the withdrawal of France from the integrated command of NATO. All U.S. and Canadian forces that were not to come under French command would have to leave French territory. 439 and 441 squadrons finally left the Marville 1 April 1967 for RCAF Air Station (later CFB) Lahr in Germany. After the Starfighters had left Marville Air Base was turned over to France and renamed Base Aérienne Marville-Montmédy. 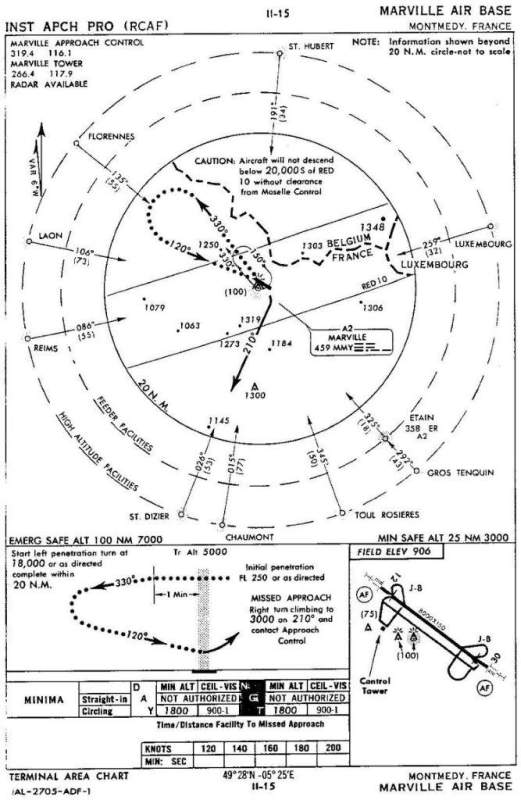 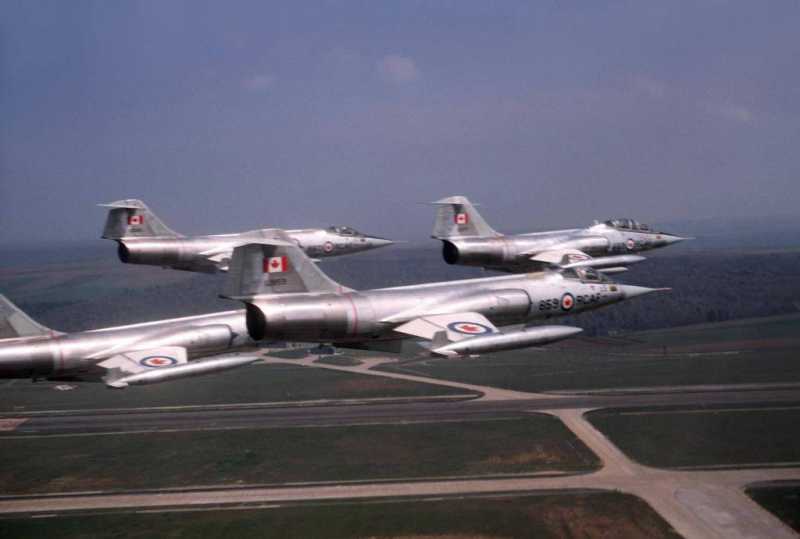 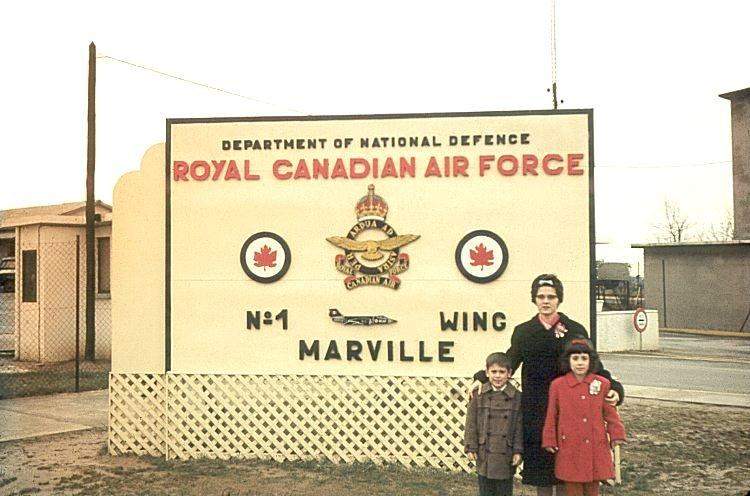 A family posing in front of the base sign at 1 Wing in 1966 (Photo from the now defunct www.marville.org). 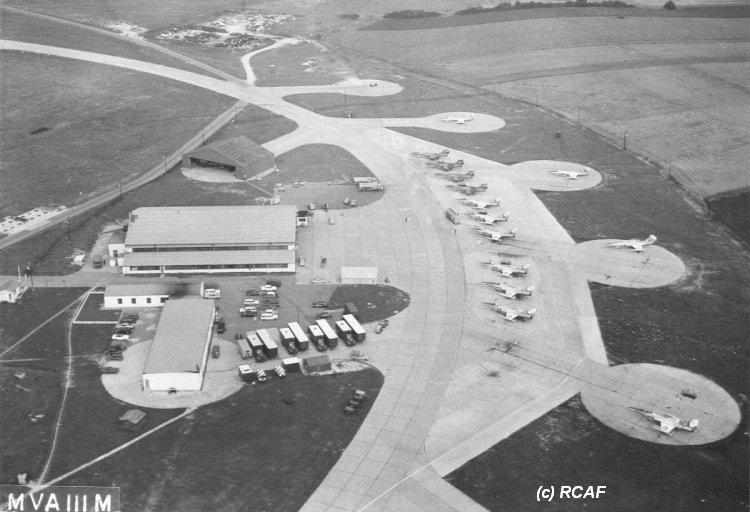 CF-104s on the southeast dispersal in 1966. Of these buildings, only the one nearest to the camera remained in 2011 (Photo from the now defunct www.marville.org). 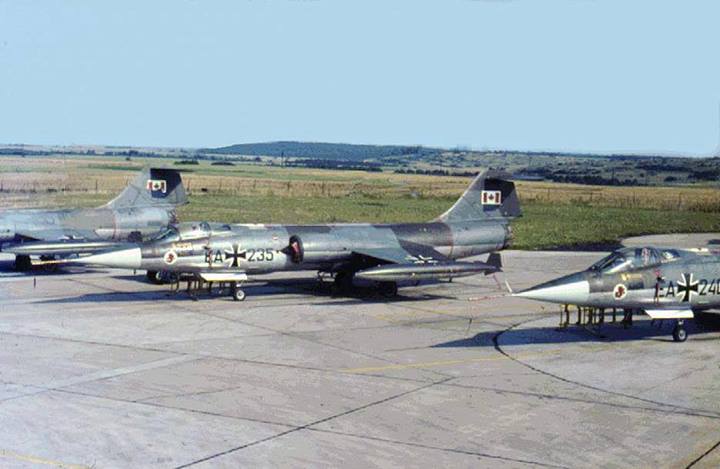 In July 1966, these German Air Force AG51 'Immelmann' F-104Gs went on exchange with the Marville Canadian Starfighters from both squadrons (439 and 441 Squadron). A number of AG 51 aircraft (at least four) were seen in France wearing Canadian zaps (including the Canadian Flag on the tail covering the German ones). A larger, but cropped version of this photo can be found on 916starfighter.de. (Photo © 1966, Gary Watson) 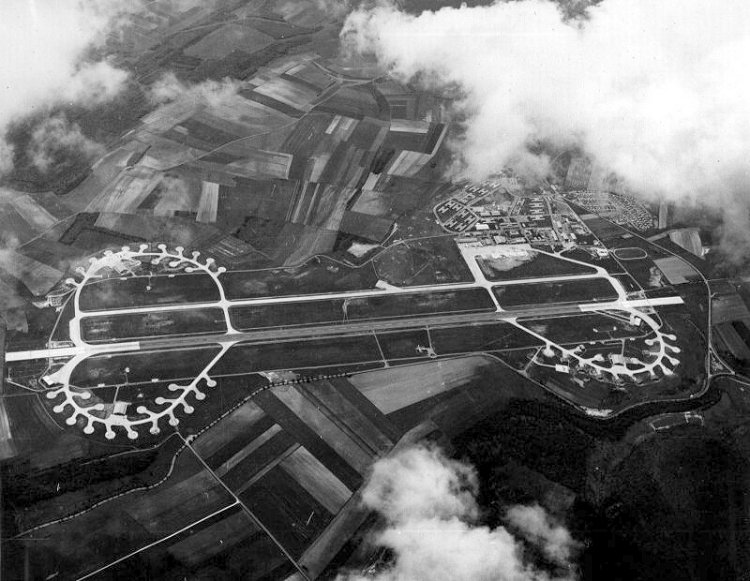 Marville in 1966, photographed to the south (Photo from the now defunct www.marville.org).
For a number of years the French Air Force (french: L'Armée de l'Air or AdlA) used the air base for training. In 1970 two hangars were dismantled to be reused elsewhere (along with one from the former USAF Tin-Rouvres Air Base) by helicopters of Army Aviation (french: Aviation Légère de l'Armée de Terre or ALAT). The hangars on the north side of the base were used by the French army until 2002.
An industrial zone was created in 1980 on the site of the former airbase and an ultralight aircraft club has settled on the base which is sometimes also used to host mass events. 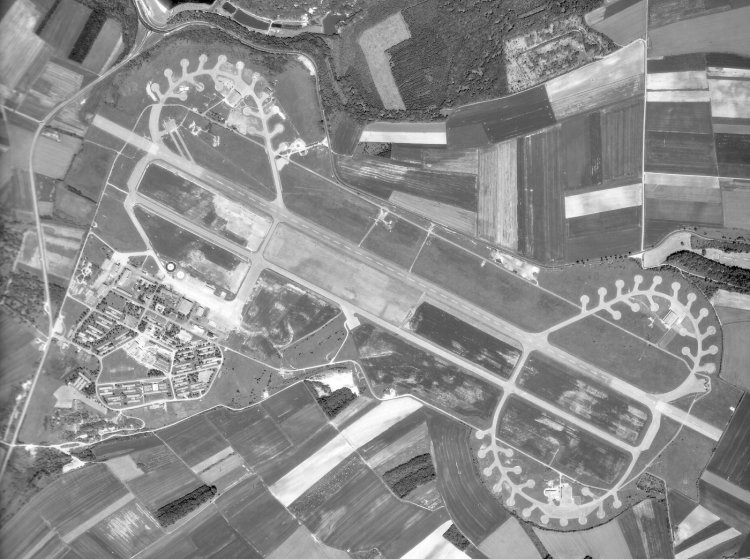 Marville, photographed in 1987, when the airfield was still being used by the Armée de l'Air (Photo from the now defunct www.marville.org).

In 2006 a combination of municipalities in the region of Montmédy bought the airfield from the French State for €533,600 in order to develop an aviation hub that will be dedicated to recreational flying with a runway of 2900 meters and a taxiway of 2400 meters.
Plans also exist to turn (part of) the airfield into a solar powerplant. During a visit at the base in June 2011 Dick Trum saw several GA-aircraft using the field. 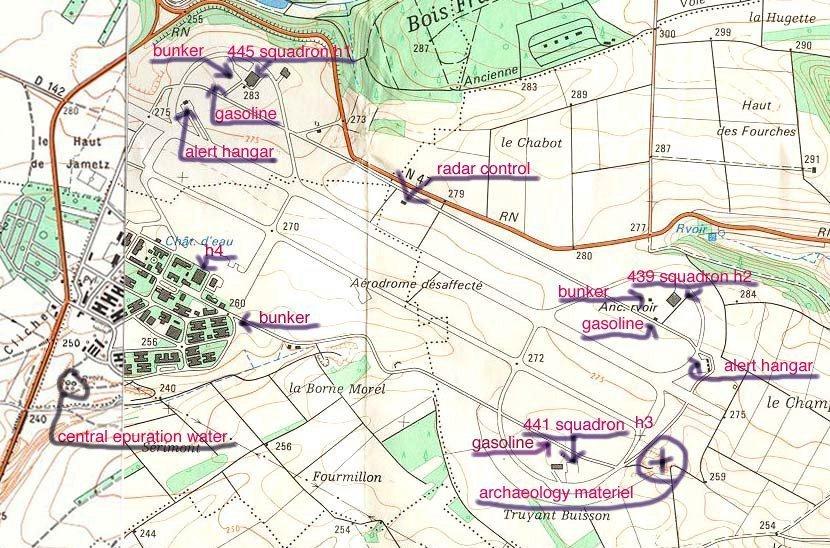 This map, published on marville.org in 2003, shows what could be found on what location. The text in the middle (Aérodrome désaffecté) means 'abandoned airfield'. 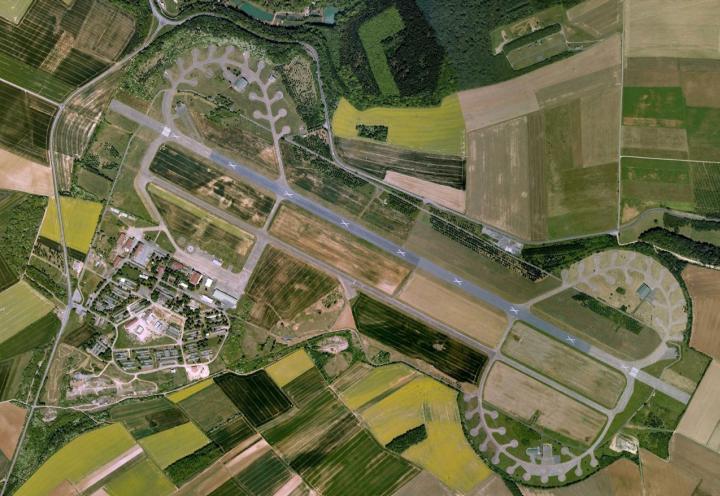 Marville in 2007, clearly showing the large X's painted on the runway (Google Earth). 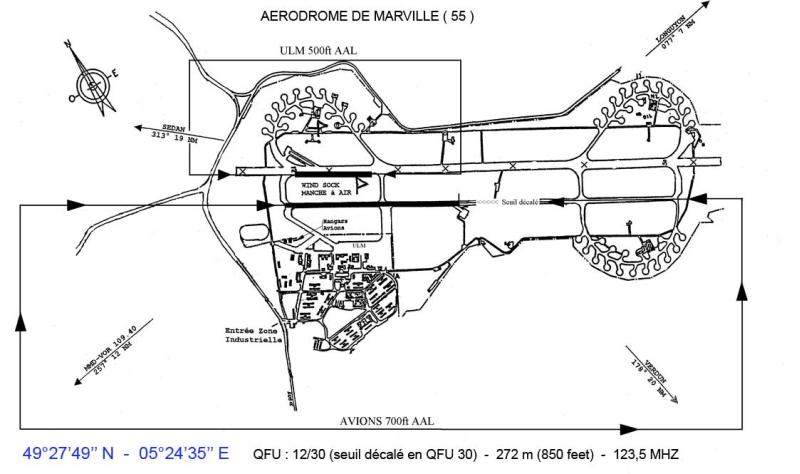 2009 Approach map for Marvilles fly-in/BBQ event. Ironically Ultralights are to use a part of the main runway, while general aviation aircraft are to use the taxiway. The text in the white section of the taxiway reads 'Seuil Décalé' or 'offset treshold'. 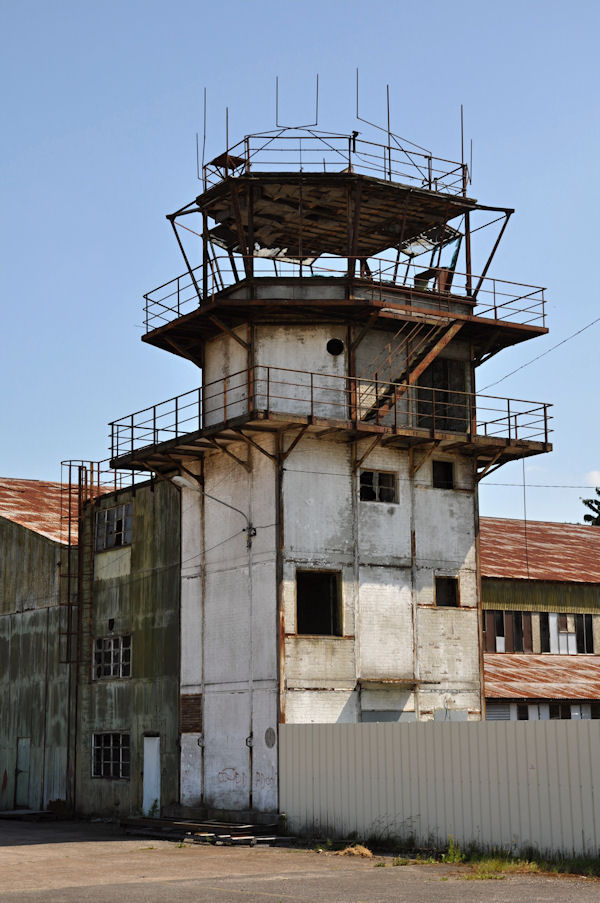 The burnt-out Marville control tower and the hangar of an ultralight club in June 2011 (Dick Trum)
On 29 July 2011 I paid the old airbase a visit myself. There was some minor activity going on on what the French call a 'Zone Industrielle', formerly the logistics site. A truck was being loaded in front of the tower. Several buildings appeared to have been converted into homes, as could be witnessed by gardens and inflatable childrens pools.
The entire east side of the airfield appeared to be abandoned, but in fairly good shape. It was possible to cross the runway there, and visit the dispersals and the old QRA area near the former H2 hangar on the northeast. No aviation activity was observed at all, although it was clear that several aeroclubs use the airfield. Signs are standing all around the airfield stating this is a military object which should not be photographed. These are leftovers from French Army use however, and remain only to scare off unwanted visitors. 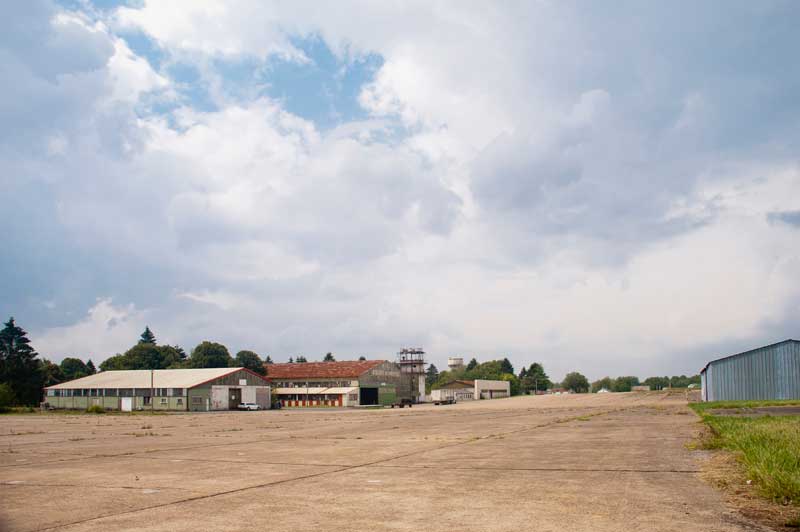 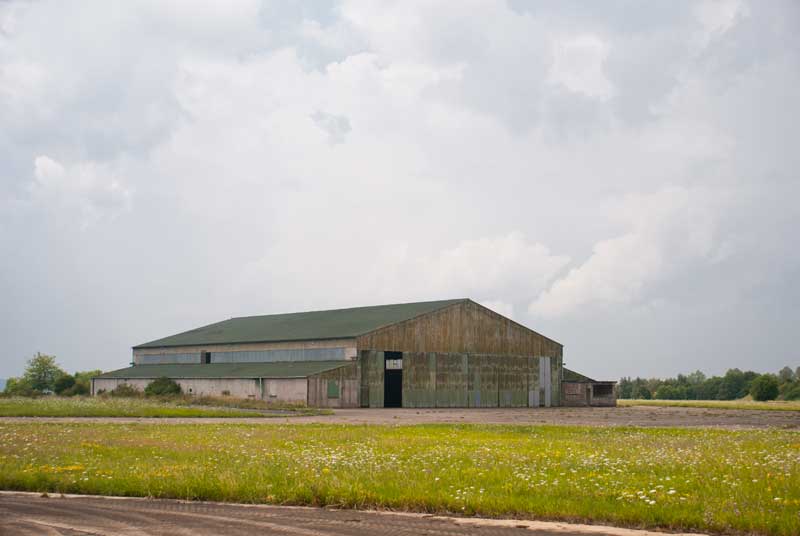 The hangar at the northeast side of the airfield on 29 July 2011 (RonaldV)
A nice set of aerial photos of the airfield as it is today can be viewed at Jean-Michel Dominiques Flickr-stream or here.
contact us about this airfield