Maurice Rose Army Air Field (also known as Bonames Airfield or Flugplatz Frankfurt-Bonames, ICAO: EDEN) was an airfield 420 kilometer southwest of Berlin.
The airfield was built on the bank of the Nidda River in 1951-1952 and named after Major General Maurice Rose, the highest ranking US military to die by enemy action in the European theatre during World War II. It was home to the 66th Aviation Company (Avt. Co.) of the 11th Aviation Batallion (Avt. Bn.) in support of the U.S. Army V Corps. Over time, a control tower ans support buildings were added and the base grew to quite some importance. 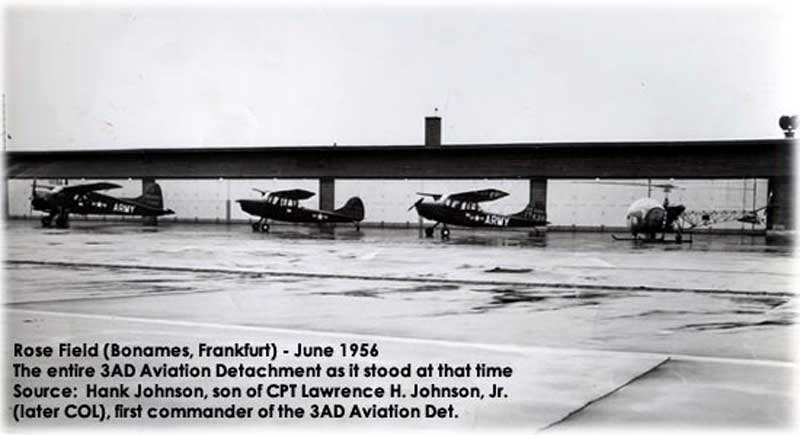 In 1962, the airfield was used by US Army fixed wing DHC U-1A Otters, DHC U-6A Beavers and Beechcraft U-8D/F Seminoles, as well as by Bell OH-13H Sioux, Sikorsky UH-19A Chickasaw and Sikorsky UH-34D Chocktaw helicopters. The aircraft stationed at the airfield were flown by personnel of the 66th Avt Co., 18th Avn Bn. The company's mission was to provide air transportation for the Commanding General of V Corps and his staff as well as performing other tasks vital to V Corps operations. During the second half of the 1960s, Cessna O-1 Birddogs and Bell UH-1B Iroquois (better known as the 'Huey') were added to the mix. By the late 1970s, the airfield had received the UH-1H as their standard helicopter. 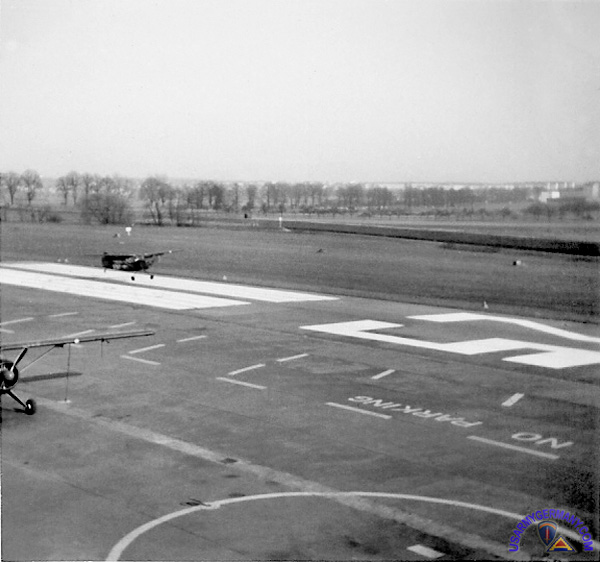 In 1982, the airfield was base to 36 helicopters. Under an Army expansion program, the 5/158th Aviation was formed at Maurice Rose Army Heli Port in 1986. Around that time, the airfield had UH-1H Iroquois and OH-58D Kiowas. When the airfield closed in March 1992, these helicopters moved to Giebelstadt.

Two years after the Americans had left in August 1992, Werkstatt Frankfurt e.V., an association working to find jobs for the long-term unemployed had taken over some of the buildings of the airfield. The rest of the airfield lay abandoned, but locals soon discovered the pleasures that the now empty runway and platform offered. On Sunny days, they soon began to use it for walks or jogs along the Nidda River, for roller skating, skate boarding and bicycling. Nature soon began to reclaim the airfield.
In 2003, after acquiring the old aerodrome land, the Frankfurt City Council opted for a subtle intervention that, with minimal economic investment, could consolidate the natural character of the space. The intervention preserved intact two thirds of the runway, thus keeping one and a half hectares of hard, flat surface that can still be used as a recreation area and skating surface. The auxiliary buildings have also been conserved, still functioning as Werkstatt Frankfurt e.V. workshops. A café has been opened in the control tower and from this height it offers good views over the Nidda River and surrounding fields. One of the hangars now serves as a firefighter museum.
The dismantling of the three remaining hectares of runway and platforms was an operation that intensified with distance from the buildings. The hard surface has been divided into zones and broken up into irregular pieces of a specific size in each zone. Instead of being removed, the pieces of concrete and asphalt have been left on the ground and, where once they formed an impermeable, continuous layer, they now present an uneven surface, full of buckling and cavities that plants and animals are progressively colonising. 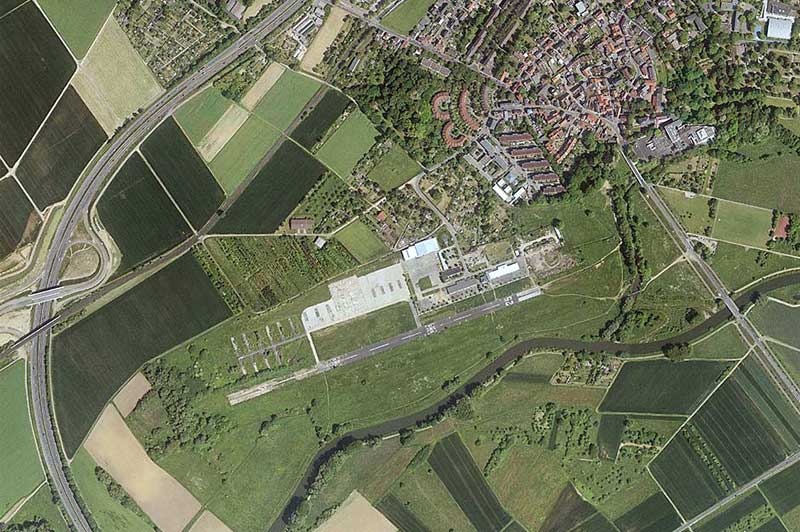 Bonames in 2004, when the landscaping effort had only just begun. Large portions of the airfield ware still recognisable in thier original shape (Google Earth). 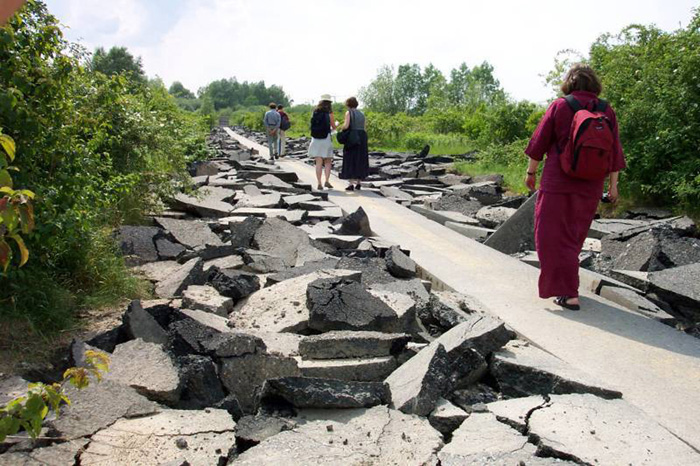 Instead of being removed, pieces of concrete and asphalt of the western third of the runway were left on the ground and, where once they formed a continuous layer, they now present an rough and uneven surface, full of buckling and cavities that plants and animals have been progressively colonising since 2004. Only the centerline remained, now serving as a footpath (publicspace.org). 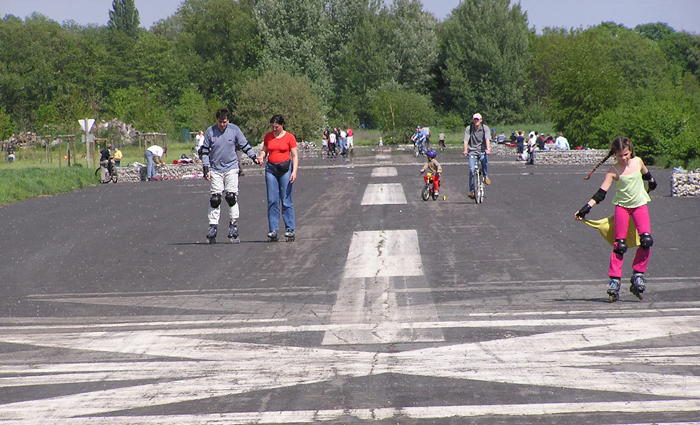 Families are using the remaining third of the runway to ride bicycles, rollerskate or just stroll (publicspace.org).

The former control tower, now converted into a cafe. 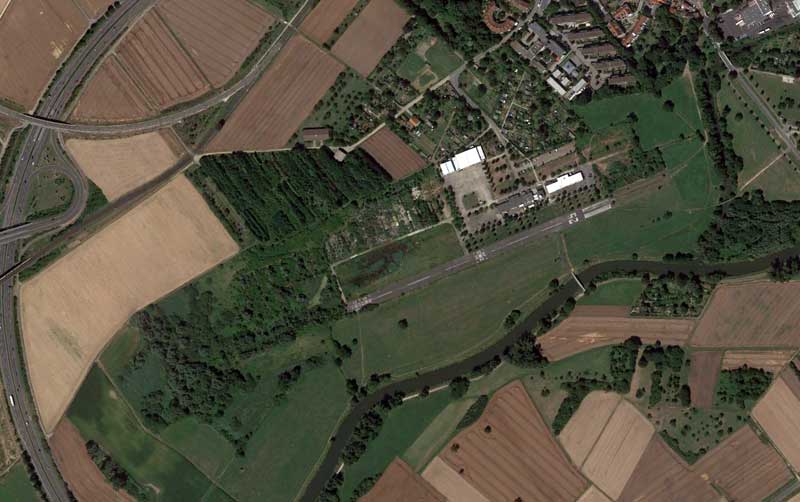