Melbourne air field (RAF Melbourne) was an airfield 270 kilometers north of London.
The airfield was built on a flat area called East Common in Melbourne parish in 1940. It did not require much effort to convert the flat meadowland east of Foss Dike into an airfield. There's a good chance the location was first considered as a satellite for the new RAF Pocklington bomber station. But as construction of Pocklington was delayed, Melbourne was first used for the Whitley bombers of 10 Sqn out of RAF Leeming and other units.
In the autumn of 1941 Melbourne was scheduled for a major upgrade, including hardened runways. The work was completed in the spring of 1942. The 3 runways were designated as 01/19 (1350yds), 06/24 (1600yds) and 15/33 (1100yds), but the airfield was opened with longer runways: 1900yds (06/24), and 1400yds (15/33). Its technical site and hangars were built to the north and east of the airfield.

No photos from before 1942 have been located

The first user of the rebuilt airfield was 10 Sqn, just converted to the Handley Page Halifax four-engined heavy bomber. After they arrived at Melbourne in mid-August 1942, it did not take long before the aircraft were used on operational sorties.
A FIDO fog dispersal installation was installed at Melbourne in 1943 and it operated from January 1944.. FIDO made Melbourne the only 4 Group airfield to have such an installation. It made the airfield a popular diversion airfield for other squadrons returning to Yorkshire from operations. Many bombers landed at Melbourne during periods of poor visibility, especially during the winter of 1944-45. On VE-Day in May 1945, 10 Sqn was one of the squadrons transferred to Transport Command, trading its Halifaxes for Dakotas over the next two months. Over the course of the war, RAF Melbourne had lost 128 Halifaxes, all from 10 Sqn.

On VE-Day (7 May 1945) the airfield was transferred to RAF Transport Command. In August 1945, 10 Sqn. changed places with 575 Sqn. at RAF Broadwell. They were joined by 1552 Radio Aids Training Flight which formed at Melbourne. The 575Sqn Dakotas were only present for just over three months before moving out again. By the spring of 1946, 1552 Radio Aids Training Flight left and Melbourne was put on Care & Maintenance under 91MU (Maintenance Unit) for storage until the early 1950s. Surplus to requirements, the airfield was then disposed of. The technical site was being utilised for local farming activities, but most of the buildings were dismantled over the next two decades. 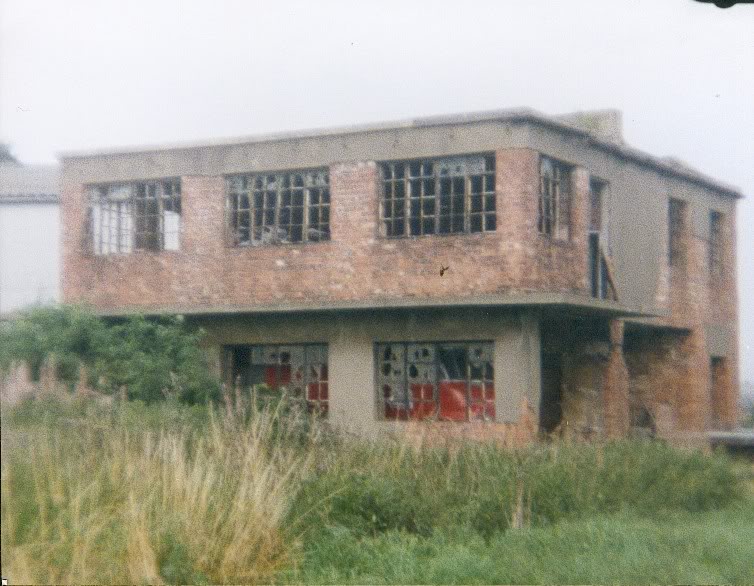 The derelict control tower of RAF Melbourne (with a fire truck inside!), before 1995 (AirfieldInformationExchange). 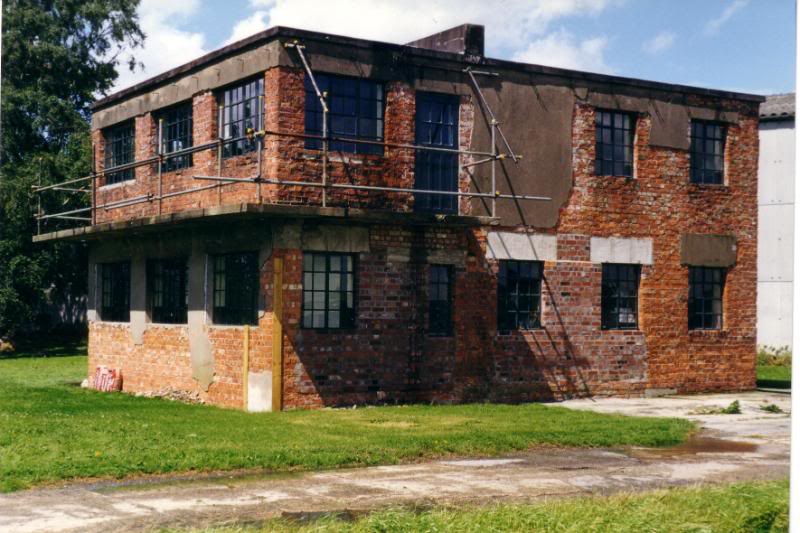 The same tower after restauration work had begun in 1996. Walls were repaired, glass was put back in and plaster was beginning to be  put back on the walls (AirfieldInformationExchange). 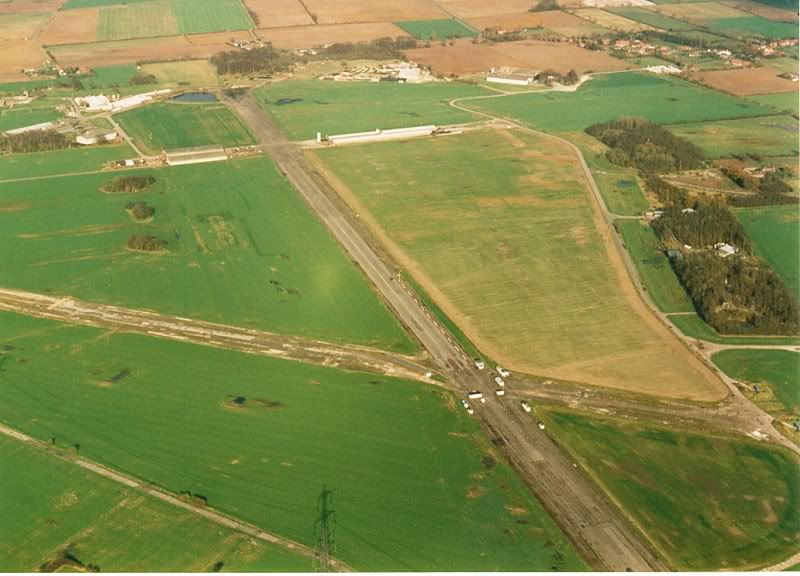 The remains of Melbourne in August 1997 (AirfieldInformationExchange).

By the mid 1990s not much was left of the airfields infrastructure. The northern half of the 15/33 runway had disappered sometime before 1994 and the remainder had farm buildings built on it. High power tension lines had been built over the western end of the 06/24 towards the northern treshold of 01/19. Farm buildings had been erected inside the perimeter taxyway on the north side of the airfield. Runway 06/24 was in use by the York Raceway for drag races and by the farm on the northeastern side for a single cropdusting plane.
Around 1995 the control tower was in a severely derelict state. A restauration effort began in 1996. The restored building now serves as a small museum dedicated to RAF Melbourne. 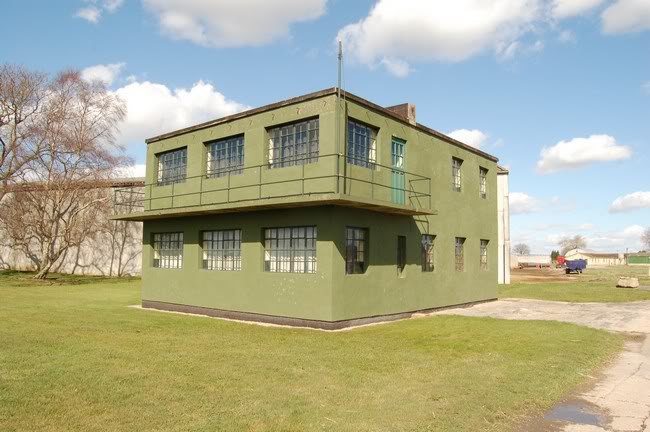 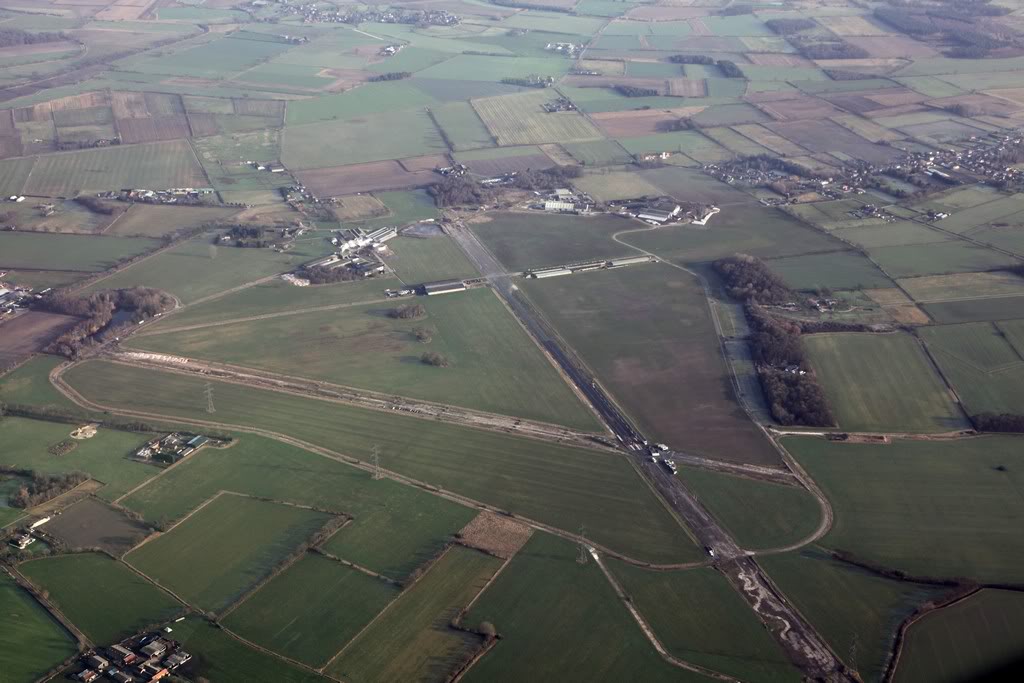