Air field Mendig (German: Flugplatz Mendig, also known as Fliegerhorst (air base) or Heeresflugplatz (army air field) Niedermendig, also known as Advanced Landing Ground Y-62 'Niedermendig', ICAO: ETHM/EDRE) was an airfield 100kilometers west-northwest of Frankfurt, Germany.
The airfield was opened in 1938 as a Luftwaffe airfield. Although it is not known what happened in the prewar years, it is known that Zerstörergeschwader 26 (Attack Wing ZG26), flying Messerschmidt Bf110 fighters flew from the airfield during the Battle of France.
In September 1944 a reconnaissance unit (Aufklärungsgruppe 123, or Reconnaissance Group AG123) used the airfield with Focke-Wulf Fw189As to monitor the Allied advance through France.
When Allied forces moved in on the airfield it was attacked by Ninth Air Force B-26 Marauders and P-47 Thunderbolts in an affort to deny the Germans the use of the airfield. The airfield was captured by American forces in March 1945. Combat engineers from IX Engineer command and the 830th Engineering Aviation Battalion arrived on 10 March to begin reparations of the damage. They laid down a 5000feet PSP all-weather runway over the cratered concrete and made repairs to the rest of the facility to make it operational. On the 17th it was declared ready as Advanced Landing Ground Y-62 'Niedermendig'. The first unit to use the airfield was 474FG (P-47 Thunderbolts) of 36FG, operating from late march until early April. When they moved out on 8 April the airfield was used for combat resupply and casevac by C-47 Skytrains until the end of the war.

After the war ended, the airfield closed on 11 May 1945. It was taken over by the US Army as part of the occupation force. The US Army moved out in late summer 1945, when French troops moved into the Rhineland as their part of the occupation zone.
On 7 January 1957 the new German Army Aviation Corps (the 'Heeresflieger') took over Niedermendig from the French Armed Forces. As Heeresfliegerkommando 801, pilot training took place at the airfield with light Dornier Do27 training aircraft. Being the first Heeresflugplatz, Niedermendig became the cradle of the modern Heeresflieger. Many of the first pilots were former Luftwaffe pilots released from being prisoner of war.
On 9 March 1959, SA318 Alouette II Helicopters arrived at the airfield, and they would remain there for over 40 years. Other aircraft were H-21 and UH-1 helicopters and later Bo-105 and CH-53G helicopters. The units operating from the base were Heeresfliegerbrigade 3 (1958-2007) and Heeresfliegerregiment 35 (1958-2004). Somewhere along the line its name was shortened from Niedermendig to simply Mendig. 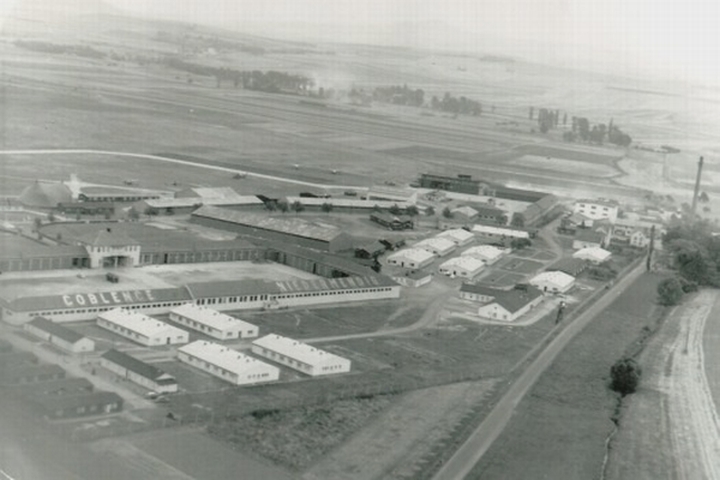 Mendig from the air in 1957. The text on the roof says Coblence-Niedermendig, showing the marks of over 10 years of French use of the airfield. 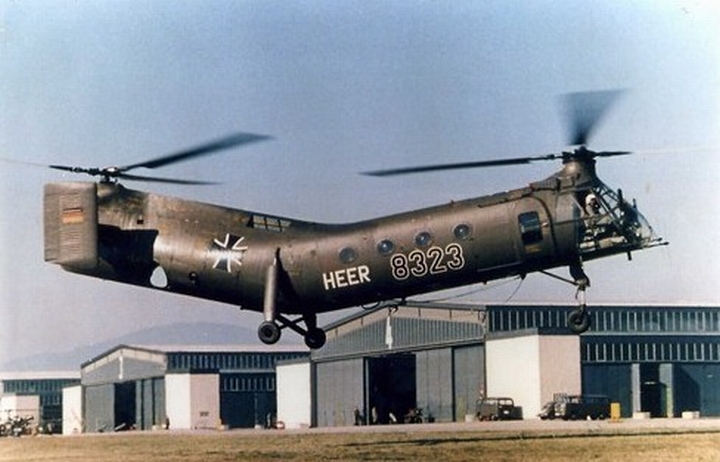 A Heeresflieger H-21 helicopter at Mendig in 1970.

Groundcrew are preparing a CH-53G at Mendig for a mission. In the background the types predecessor (a H-21) and two UH-1Ds can be seen.

The air base was used by the German Army helicopters corps for almost 50 years, before being closed on 30 June 2008. It was then transferred to Flugplatz Mendig GmbH, who as the owner leased parts of the airfield to others. One of those users was a long time user (since 1972) of the airfield: Sportfluggruppe Mendig.
Another aviation related business is the Roland Aircraft light aircraft company, who occupies the former Bo105 hangars at the northwest side of the airfield. Recently the airfield lost its ICAO designator EDRE, to become a special airfield (German: Sonderlandeplatz).
Other users were TÜV Rheinland, who tested vehicles at the airfield. Several television production companies also used the airfield, mainly for car related programs which incluse driving sessions.
The airfield was taken overe by Triwo AG, who now exploit the airfield.

2011 Approach map of the airfield