Airport Neumünster (german: Flugplatz Neumünster, ICAO: EDHN) is an airport northwest of the Schleswig-Holstein city of Neumünster in Germany.
Like many airfields in Germany airport Neumünster was founded by the Luftwaffe in 1935. As the new Luftwaffe was in its infancy, it needed new aircraft and new airfields. Construction of the airfield baegan in 1936 ath the edge of Neumünster. To make room for the new airfield a farm and some gardens had to be removed, much to the grief of the local community that had come to love and enjoy these gardens. By 1938 preparation of the landing field had progressed to 70% so the construction of the first hangars begun. At the east side of the airfield the first barracks as well as air traffic control facilities and shelters for flying and ground personnel were built.
The first user of the airfield was not millitary however, but a private company that worked very close with the military. "Land und See Leightbau GmbH" of the Sachsenberg brothers established themselves in a plant in Neumünster in 1938/1939. Their business was repairing and re-equipping aircraft. By 1939 the "Land und See" orderbooks were so filled with orders from the Luftwaffe they began looking for an expansion. For this purpose they took charge of a hall that until that time had been in use to auction live stock. Today, this hall is known as the "Holstenhalle".
The first flying unit at the base moved in on 21 September 1939. It was 2 Group of Fighter Wing 77 (german: II Gruppe of Jagdgeschwader 77, or II./JG77) coming from Nordholz. By October I./(J)/LG2 and a part of JG101 had joined them, but the first left already on 1 November, the other by Februari 1940.

In April 1940 the air bases in Schelswig-Holstein played an important part in Operation "Weserübung" (Exercise Weser). On 2 April the Mountaineers (german: Gebirgsjäger) and other infantry units had been brought together at Neumünster to be flown to Narvik and Oslo-Fornebu (Norway). For this task the Special Fighting Units (german: Kampfgruppen zur besonderen Verwendung, or KGr.z.b.V) 102 and 107, flying Ju90 and G38 had been brought to Neumünster.
KGr.z.b.V 102 took off on 13 April 1940 in 10 aircraft, heading for Narvik. When they arrived there they emergency landed on a frozen lake, and from there the soldiers continued to Narvik by land. The aircraft sank through the melting ice however. This was not their first setback, as two of their aircraft had already crashed on takeoff at Neumünster, causing several deaths and wounded. KGr.z.b.V 107 fared much better; their machines, including some obsolete Lufthansa G38 and four Ju90 transports all brought their cargo to Norway without incident. After the operations in Norway and Denmark were complete, Neumünster became quiet again.

Other than a few IV.(EG)/ZG26 Messerschmidt Bf 110 attack aircraft that stayed a few days in August 1940 the field mainly saw Bf109 fighters visiting "Land und See". As noone counted on enemy attacks the field did not even have Flak until 1942. No units are known to have stayed at Neumünster until 1943, besides the occasional visitor for transport or refuelling. The only incidents during the period were Allied bomberes that crashed in the city after having been shot by German fighter aircraft. In December Joseph Goebbels ordered 16 year old school students to begin manning Flak and searchlights. This meant that many students began their training at the field on 15 January 1943.
In April II Group of Jagdgeschwader11 (III./JG11) came to the airfield, bringing 480 men and Bf109G-6 fighters. Ths year also saw an increased number of air battles with Allied bombers and fighters, of which severeal crashed in and around Neumünster. This also happened to German fighters, causing the death of many of them when they were unable to bail out from their aircraft.
In 1944 only one unit utilised the air base. A detachment of the Aircraft Piloting School (german: Flugzeugfüherschule) B39 took to the airfield, bringing their FW58, Ju W34 and Siebel Si204 aircraft. They brought a fair number of Italian pilots to town, who received their training in June and July.
By April the airbase had its first air strike by the USAAF, causing one death and severeal injured. Buildings and equipment received only minor damage though. Only a month later a train was attacked nearby by Allied pilots, killing 19, mainly women and children. The next attack in October caused hardly any damage at the airbase, but significantly more in the city of Neumünster: over 100 people lost their lives.

In February 1945 the first tell-tale signs of the end of the war became visible. Losses had risen so dramatically that underaged had been drafted into frontline service for some time. In some parts the fronts had moved onto German soil. For Neumünster this meant more activity at the airfield.
By April the German cause seemed hopeless. The Russians had encircled Berlin, and the British had crossed the Elbe River near Lauenberg At the airbase II./JG26 flew their FW190D-9s as fighter bomber and reconnaissance aircraft all day. On the 30th of April I./KG66 flew their Ju188 machines into Neumünster on their way to Norway. They left on 3 May with JG26, leaving only non flyable aircraft and aircraft that were in repair at "Land und See".
A day later the British took Neumünster and the undamaged air base, freeing over a thousand forced labourers from all over Europe at "Land und See". The last German machine landed on 8 May 1945 at the airport: a Ju52 of a transport Group, and it flew in from Norway.
After this the air base was used as a scrapyard for old German aircraft. The final wrecks ware removed in spring of 1948. 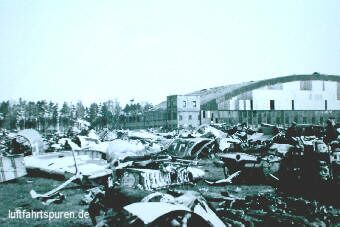 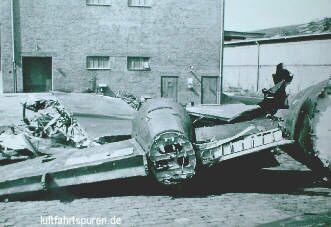 Wrecks at Neumünster 1946, left at the airbase, right at "Land und See" (Source). 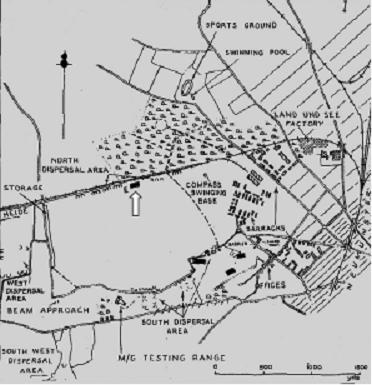 Neumünster, ca 1950. The white arrow points to the large hangar of "Land und See", but other areas can be recognised as well (Source).

Today a small part of the former airbase is the new airport of Neumünster. Most of the former airbase has disappeared. When thousands of refugees fled the east of Germany, many ended up in Neumunster. To house them, an new neighbourhood was built on a major part of the air base. A large hangar still exists next to what remains of the airfield, but it is on private property and thus off limits. The main guard building is now a police station. Finally one building is still in use by the Luftwaffe, but no further details about it are known.

The new airport of Neumünster began with the foundation of the Neumünster Flying Club in November 1950. A year later they finally received permission to resume flying, albeit with gliders only, as powered flight was still prohibited by the Allied authorities. In 1952 the club received its first post-war glider: D-3500 was heavily sponsored by the local Coca-Cola factory. Only a year later their fleet had increased to two, and when flying was allowed over Germany in 1955 a captain of the British Army had been found willing to acquire a Tiger Moth (G-ANUF) to tug gliders into the air. 'His' Tiger Moth did not last long: shortly after arriving at the club it crashed and was damaged beyond repair.
In 1966 the current airport was taken into service, the hardened runway in 1975. In 2010 the flying club celebrated its 60th anniversary.
The airport is owned and operated by the Flugsportclub Neumünster e.V. 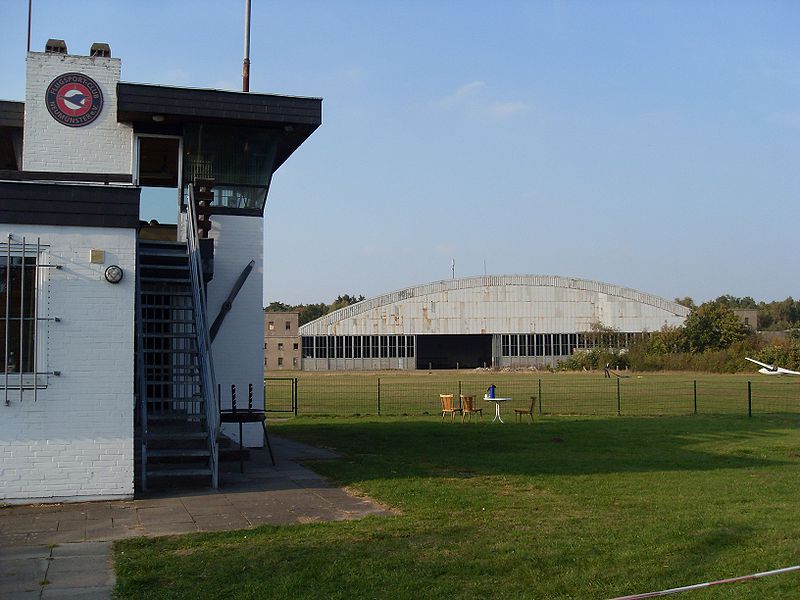 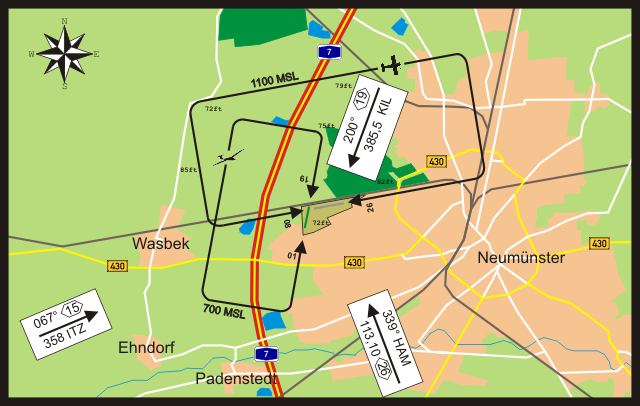 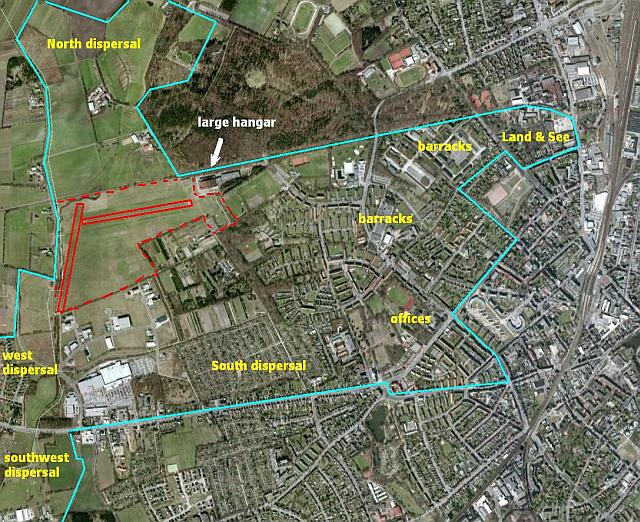