Airfield Ockenburg (Dutch: vliegveld Ockenburg) was an airfield on the south side of The Hague, the Netherlands.
After the ELTA  aviation exhibition in Amsterdam many initiatives in aviation were started. One such an initiative was the launch of airfield Ockenburgh in The Hague, which was to become 'the First Airport of the Netherlands'. Ockenburgh plans were ambitious: it was to have day and night flying operations, a passenger service to Amsterdam and possibly later to Rotterdam as well, and room for private owners of aircraft. On the edge of the airfield Ockenburgh was to get an office building named the Aviation House (Dutch: Luchtvaarthuis), which was to become what the Scheepvaarthuis (Shipping House) in Amsterdam had become to shipping. It was to become a meeting point for anyone and anything aviation related, with offices, apartments, shops, aircraft dealerships, a parking garage, and even a small airstrip on top of the roof!
Late in the summer of 1919 the terrain had been completed to such an extent that the airfield was opened with a three day flying fest. The fest was such a success it was lengthened by another day. When it was over however all activities came to a halt.
The only aviation related activity in the period that followed was an aviator that made an emergency landing in 1928 at the field he remembered from the fest almost 10 years prior. The airfield had been converted into a sports park.

During the mobilisation before World War II the airfield was reactivated to reserve status and renamed Ockenburg (without the final 'H'). On the eve of the German attack it only had a few unserviceable aircraft: 5 Douglas 8A-3N bombers (which were assembled from new at the airfield) and two Fokker G.1B fighters. In the early hours of 10 May 1940 two Fokker D-XXI and two Douglas DB-8A/3Ns landed; they needed fuel and ammunition. Only the latter was available.
A short while later German fighters attacked the airfield, followed by Fallschirmjaeger and 28 Ju-52 transports. Soldiers stepping out of the aircraft immediately opened fire. At 7am the battle was over; of the 96 defenders 24 were killed, another 18 were wounded. Soldiers that were garrisoned nearby (mostly non-combat personel) counter-attacked, but they were poorly organised. A Fokker T-V bomber however managed to destroy 4 Ju-52s, but was lost after the attack, shot down by no less than 5 fighters. Another 3 T-V bombers bombed the field a little later.
Artillery fire from nearby Poeldijk began at 8am, and with the assistance of a battalion of the army they managed to defeat the German troops. Ultimately the Netherlands still lost the war after 5 days.

Bird's eye view of Ockenburg in the winter of 1940 (NIMH) 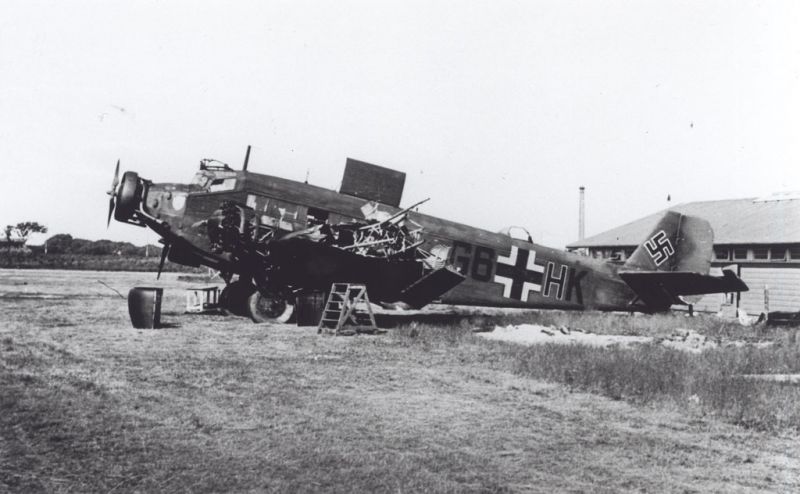 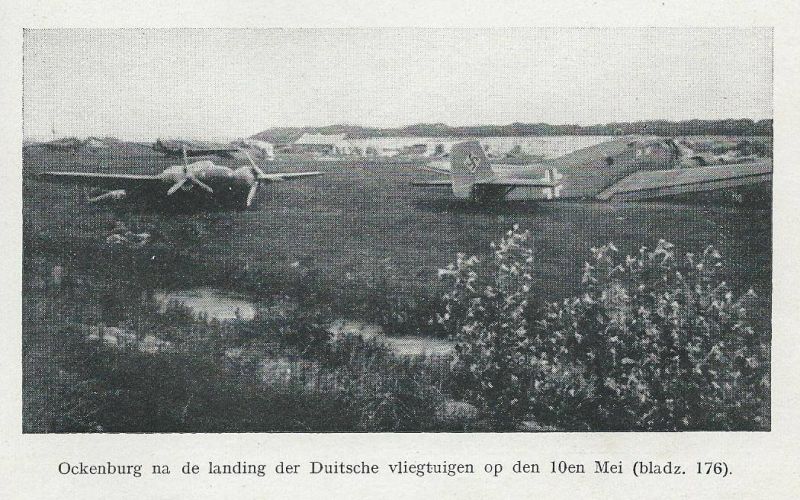 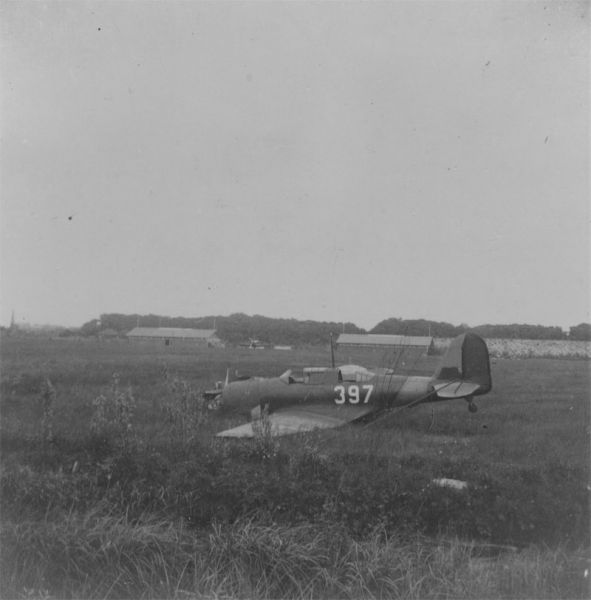 Douglas DB-8a/3N (a.k.a. Notthrop A-17) light bomber on its belly at Ockeburg after the airfield was overrun. Ockeburg had served as a depot voor the type, as there were not enough sparkplugs available to have all the aircraft flyable. 394 to 398 were stored in reserve and captured, but during the attack on the airfield 397 had been damaged (NIMH) Photographed immediately after the capitulation of the Netherlands, this photo at Ockenburg shows at least 8 Ju-52/3m's and what appear to be two Fokker D21's that were at the airfield. Historical records state all of theJu-52/3m's were damaged during the attack on the airfield and their wrecks prevented German operations from the airfield for a while (NIMH).

The aircraft that were at Ockenbug were captured by the Germans, some were tested and ultimately displayed in Berlin. The airfield itself was fenced off, and converted into a fake airfield. In 1944 the airfield became the launching pad of V2 rockets aimed at Antwerp and London. A misfire of a V2 on New Years day 1945 killed dozens of people in the nearby Indigostraat in The Hague.

After the war, Ockenburg was considered as a possible site for a navigation station (Cold War euphemism for an air defense Command and Control/GCI-radar site). Navigation Station "South" (Dutch: Navigatie Station "Zuid", callsign 'Meadow') was ultimately built a few miles further south in the village of De Lier.
Today, little is left of the former airfield, although it is easily recognisable from the air. The area was converted back into a sports park and surrounded by residential areas. The International School of The Hague is located on the northeast side of the terrain.

More on Ockenburg can be found at http://www.vliegveld-ockenburg.net/ (Dutch language, but with photos)