Air base Oostmalle-Zoersel (Dutch: vliegbasis Oostmalle-Zoersel, ICAO EBZR) is a reserve NATO airbase in the province of Antwerp (Dutch: Antwerpen) in Belgium.
The airbase, like many of it's kind was built in the 1950-1955 timeframe. Property was acquired in 1952, but construction did not begin until 3 years later. The NATO reserve status means the air base is a 'bare base' facility: it has one runway, fuel and ammunition storage facilities, a total of 12 dispersals (6 on each end) and few hangars, no logistics or ATC. 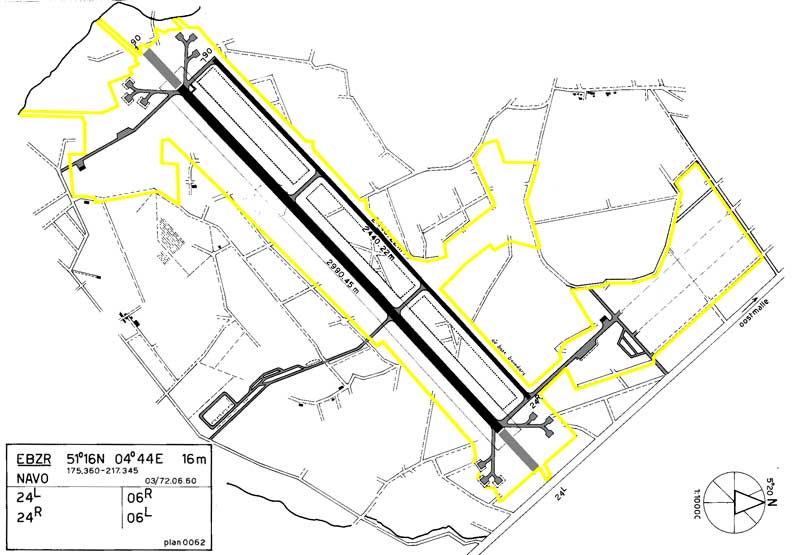 1962 map taken from the Belgian Land Register, showing (in yellow) the outline of the military terrain. Edit and map kindly provided by Paul van Pul, via email

From 1962, the Belgian Air Cadets used the airfield to train their pilots, until they were moved to Bertix (Jehonville) air base in 2007. Until 2012 it was categorised as a reserve air base of the Belgian Defence Forces - Air Component. Despite its military owner, the air base is also home to a flying club, who have been flying from it for over 30 years.
Because the airbase is military domain, it is formally closed to the public, although it is permitted to visit the area around the aeroclub during opening hours. Although the air base has a reserve status, the Belgian Armed forces could use the air base with any aircraft they operate, including Hercules transport aircraft. In March 2012, the federal Belgian government decided to change responsibility for maintenance of the airfield from federal to the Flemish level and offer the property for sale.