Airfield Peenemünde (German: Flugplatz Peenemünde, ICAO: EDCP) is a special airfield north of Peenemünde, on the island of Usedom in Mecklenburg-Vorpommern, Germany.
It became operational as an airfield for the aircraft developed at the "Peenemünde-West" Test Unit of the Luftwaffe and featured a hardened runway.
Although it was not the only German aviation research field, it was certainly the most important, and in a sense it is the birthplace of both the cruisemissile and of spaceflight.
It should not, however, be forgotten that the primary research focused on weapons that were intended to kill thousands.

Because nobody ever thought rockets would become more than the small ground launched projectiles of World War I, German rocket research was not banned by the Versailles treaty, while long range artillery was.
This meant that throughout the 1920s Germany was actively researching missile technology without anyone actually hindering them.
By the time the Nazis seized power in Germany, research had advanced to such a level that a large testing facility was required.
This lead to a joint Luftwaffe/Army funded research center at the remote island of Usedom, just north of the village Peenemünde.
Construction began in 1936 with the acquisistion of grounds.
In 1940 the village of Peenemünde was designated a restricted military zone, it's people were evicted and the village levelled.
On the 25square kilometrs sized grounds the military planned two standalone powerstations, multiple research facilties, teststand, barracks and an airfield.

Generally speaking the island was split into 4 main areas:.
1. The test unit of the Luftwaffe, where the aviation industry tested military hardware such as the Fi-103 (V-1 Flying Bomb).
The Luftwaffe site had 5 launchrails for V-1s, over 120 hardened buildings and over 7000square meters of hangar space.
It had the use of its own harbour (Nordhafen), about 8 kilometers of railway tracks, 12 kilometers of road and an airfield with two runways (1 kilometer and two kilometers in length).
To protect the facility from high tides a 6 kilometer long levy was built, in part in the water, to raise the land far enough above sea level.
In doing so they created about 500 hectares of high and dry land.

2. The development center of the Army, east of the Luftwaffe test unit.
This is the facility where the development of the A-4 (a.k.a. V-2) and A-5 rockets was concentrated, which led to the first man made object being shot to the edge of the atmosphere and into space.
The Army had about 80 hardened buildings erected, including storage facilities of up to 6000 square meters, and baracks holding up to 3000 people.
On the testing field, north of the develeopment area the Army had 10 testrigs built, along with their technical facilities.
Altogether 10 kilometers of roads and 8 kilometers of railways were constructed.

3. Research production facility of the Army, where as of 1939 the army had produced all research materials.
This is where the V-2 was to be procuded in series.
This area too received a levy to raise the ground level, the first (and ultimately only) powerplant, as well as 10 kilometers of road and 15 kilometers of railways.
An already existing railway line for streetcars was lengthened to include the Luftwaffe facility and the harbour and the two railway systems combined transported up to 25000 people daily.
Buildings included 150 hardened buildings, production halls of up to 28000 square meters of floorspace, the coal fired powerplant, central heating, the oxygen plant and three testrigs.

4. the housing area, consisting of a planned village with family homes and barracks, capable of housing 5000 employees and their families.
The northern part of this village and a large part of the southern part were destroyed by a massive air attack of the RAF in August 1943.
After this air attack much of the production facilities was moved to bomb-proof facilities away from Peenemünde. 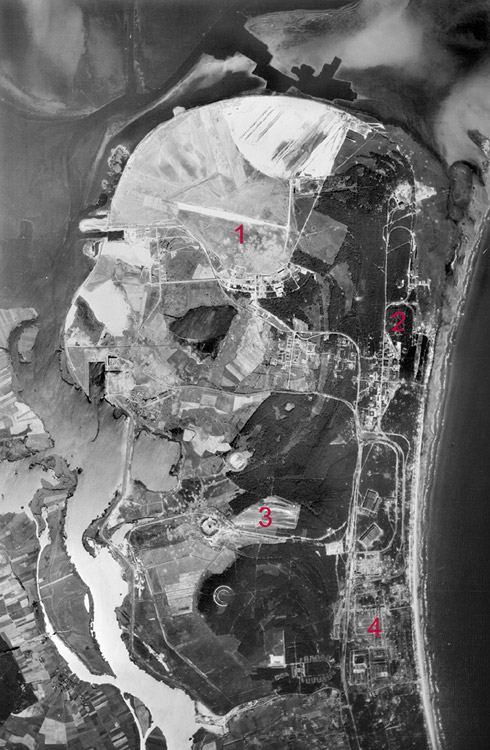 Peenemünde as photographed by the RAF on 21 July 1944.
For an explanation of the numbers see the text below.


In May of 1945 the Red Army took control of Peenemünde, and dismantled much of the facility to take back to the Soviet Union.
Many of the surviving buildings were stripped bare of blown up.
It became a new 2465meter concrete runway in 1956 to allow for the operation of modern jet aircraft.
The area became a military restricted area when the German Democratic Republic was founded and the National Peoples Army becam the primary user of the terrain.
In 1961 the airfield was handed over to Jagdfliegergeschwader (JG) 9, who used the airfield until 1989.

After 1989 the airfield was used as a storage facility for former GDR aircraft.
Today the airfield is used for sightseeing flights and flying training with general aviation aircraft.
Because of its oversized runway the airfield is home to many flying schools, and since the summer of 2010 a L-39 Albatros jet operates from the airfield.
Bustours carry tourists over the old facility, showing East German bunkers, but also the old launchpads.
The old powerstation has partially been converted into a museum. 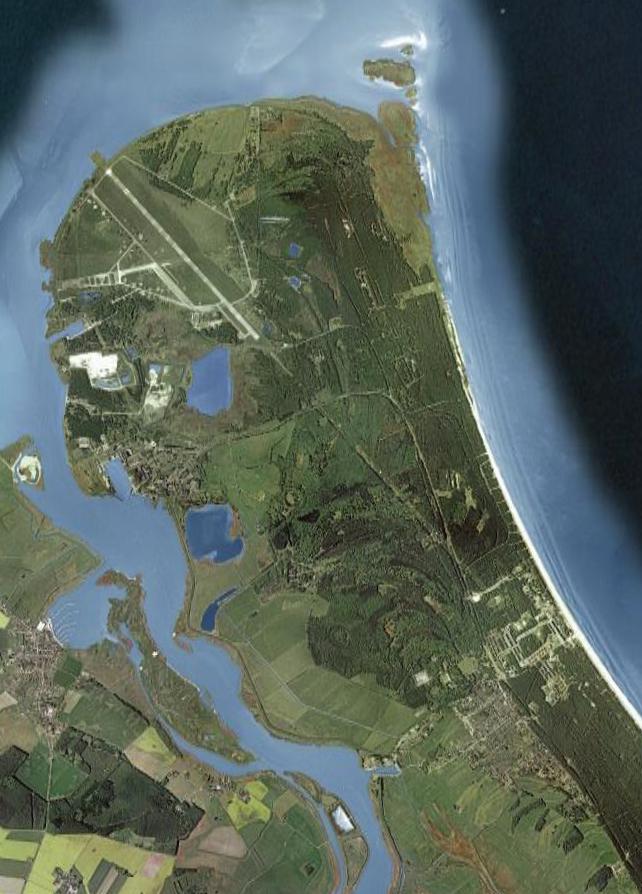 Peenemünde from the air in 2000 (Google Earth) 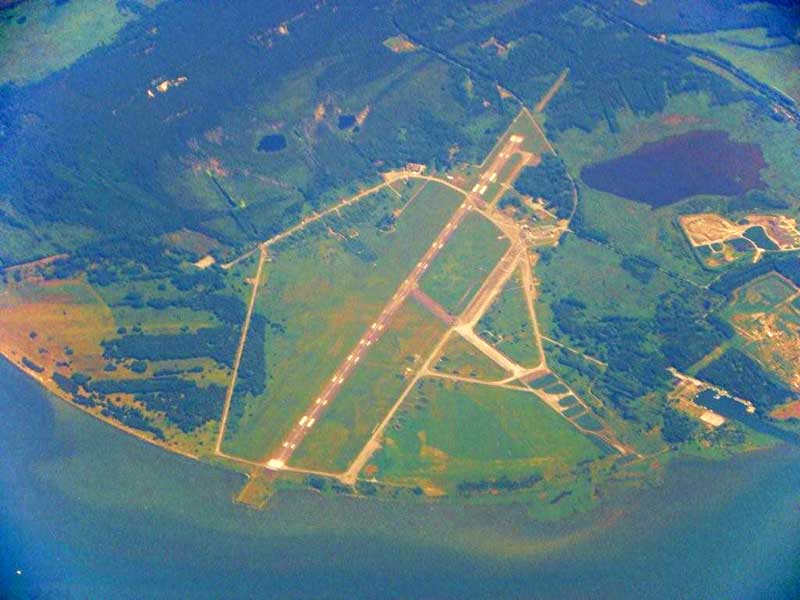 Peenemünde seen from the north on 24 June 2009 (photo: Magnus Maneulsson, via e-mail)