Pocklington airfield (RAF Pocklington) was an airfield 270 kilometers north of London.
The airfield was built from August 1940, featuring 3 runways 35 circle dispersals and two loops. The technical site, located to the southwest, featured three hangars.
The first operational unit to occupy Pocklington was also the first Canadian suadron in Bomber Command, 405 Squadron flying Wellingtons. During the first eleven months the squadron took part in 84 raids, losing 20 bombers. In April 1942 the squadron converted from Wellingtons to Halifaxes. With that aircraft they flew another 20 raids until 405 traded bases with 102 Sqn from RAF Topcliffe. 102 Sqn remained at the base until the base was closed. A total of 206 bombers from this station were missing on operations or lost in UK crashes; 27 Wellingtons and 179 Halifaxes.
As with other Squadrons of 4 Group, 102 Sqn was transferred to Transport Command on the day before the official end of the war in Europe. During the summer they exchanged their Halifaxes for Liberators before being moved to RAF Bassingbourn in September 1945. The airfield was then put on care and maintenance.
In September 1946 the airfield was permanently closed.

Four runways can be seen in this World War II aerial photo of Pocklington. The third runway was never completed when it was realised that 11/29 was aligned directly towards Pocklington town threatening a considerable hazard. It was replaced with a fourth, which was also considerably longer (RAF, via AirfieldInformationExchange).

A 405 Sqn Halifax at Pocklington (AirfieldInformationExchange)

Much of the former base was reverted to agricultural use. Its hangars became grain stores for some time. The technical site became a large industrial area. Many of the former airfield buildings remained though. The control tower existed until at least 1982. Several hangars still exist, and contnue to be used. Two runways also still exist, at least partially. They are used by the local Wolds gliding club, who purchased what remained of the airbase in 1983. They continue to use it as a glider airfield. 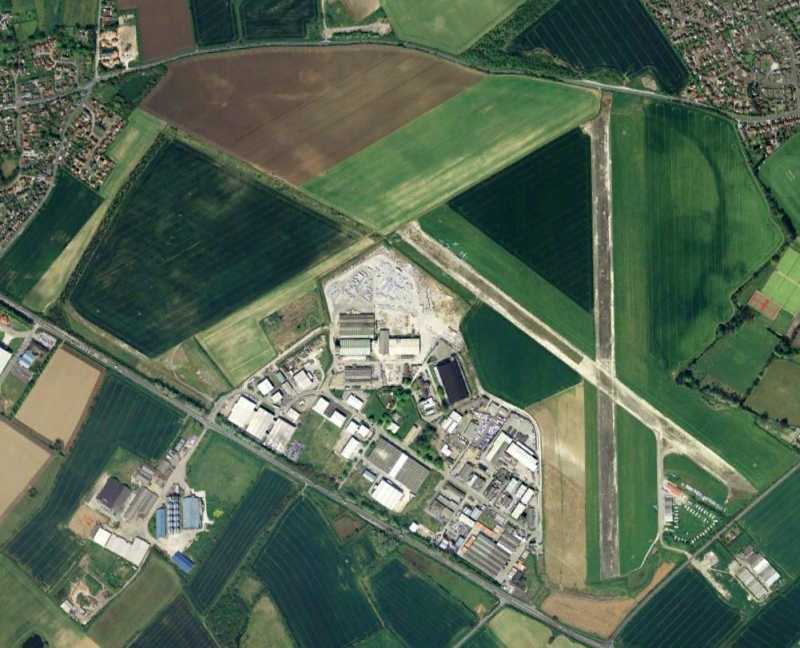 Overview of the airfield in 2007. Some mild scarring of the ground still indicates the location of taxitracks and runways. (Google Earth) 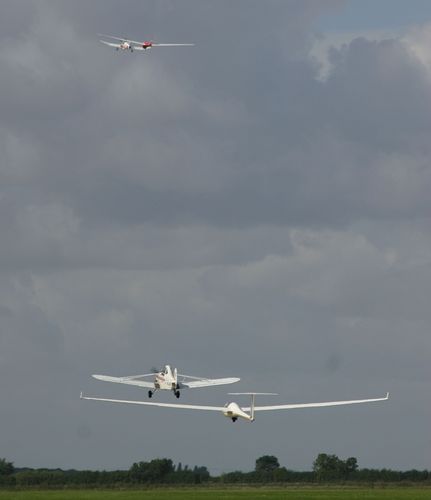 Towplanes pulling up gliders at Pocklington in 2007.