Air field Pontedera (italian: Aeroporto di Pontedera, ICAO: LIAT) was an airport located in Pontedera, east of Pisa, Italy.
It was built as a military airfield for airships south-west of the city centre by the Royal Italian Navy in 1913, on the eve of the First World War. The choice of location in the countryside south-west of Pontedera was determined by its proximity to the Ligurian Sea with its good weather, the favorable winds in particular, but also by the presence of the nearby railway line Florence-Pisa-Livorno. The large Curigliana hangar to house the airship could be seen far away in the countryside. The landing of an airship and the entry of the aircraft into the large hangar with its slowly opening door was a great show for that period.
During the First World War a second auxiliary hangar was built to shelter other (smaller) airships.

The small fleet of airships stationed at Pontedera air field was used primarily to patrol the Ligurian Sea between the island of Elba, Corsica and the Gulf of Spezia, searching for ships and especially enemy submarines. Additionally the unit was tasked to escort friendly shipping convoys.
At the time Italy was allied with Austria-Hungary and Germany against the French and Russians (later joined by the English). At that time of the war the danger of an attack from the sea was perceived to come that direction, from Corsica, or the Tyrrhenian and the Ligurian Sea. With the sudden shift by Italy to the French/Russian/English side the danger shifted almost overnight to the Adriatic Sea. As German and Austria-Hungarian submarines still made shipping on the Italian west coast dangerous, patrols were still being carried out however.
Pontedera was a relatively safe airfield during World War I, only one accident (killing all 5 crew members) took place in an incident that was never fully understood despite an extensive investigation.

Immediately after the war the airships were used for tourist flights to raise money for families that had lost relatives during the war. Authorised by the Ministry of the Navy, they were a huge success at a time air travel was in its infancy and not affordable to everyone. For 100 Lire you could buy yourself a 2 hour flight on the M-9 airship on one of three routes:
Pontedera - Lucca - Pisa - Livorno - Pontedera.
Pontedera - Lake Massaciuccoli - Pietrasanta - Massa - Marina di Massa - Forte dei Marmi - Viareggio - Pontedera.
Pontedera - Empoli - Firenze - Pontedera.

On 28 May 1923 the Italian Royal Air Force (italian: Regia Aeronautica Italiana) was established as an independent armed force next to the Army and Navy, which confiscated all the aeronautical facilities belonging to the two other Italian Armed Forces. As a result the airfield of Pontedera came under the control of the Regia Aeronautica on 20 December 1923.
In the airship hangar of Pontedera the N-1 airship had remained for a long time. It had been built by Umberto Nobile and was renamed NORGE, with which the Italian Trasvolatori made his first polar expedition in 1926 along with Norwegian explorer Roald Amundsen and American Lincoln Ellsworth. The companys crown achievement was the conquest of the North Pole from Norway.
The N-1 also took part in an air race from Pontedera to Barcelona, a trip that took 9.5 hours with 10 passengers on board. The airship was welcomed to Barcelona at 8.20 by King Alfonso XIII.

By the late 1920s it became clear that airships were losing in importance to aircraft, and consequently the Reggia Aeronautica downgraded the importance of its airships and their associated airfields. The last airship to leave Pontedera took off on 12 January 1928, ending a glorious period for both the city and its airfield. The airfield was converted for military aviation and the large hangar, local symbol for the progress of aviation, was dismantled shortly after. Two much smaller but more efficient hangars were built in its place. The runway was extended and made suitable for taking off and landing.

In 1924 Genovese industrialist Rinaldo Piaggio acquired the Pontedera company CMN (Costruzioni Meccaniche Nazionali), which he renamed Officine Piaggio. It grew bigger and bigger during the 1930s, and began production of military aircraft, primarily bombers. His plant and facilities grew and grew, slowly overtaking the airfield. Especially successful was his P.108 four-engined strategic bomber, Italy's first of its kind. The type was however also responsible for the killing of the commander of the 274th Bomb Squadron at Grande Raggio (BGR), a unit of 46º Stormo. The commander, third son of 'Duce' Benito Musselini, crashed when his aircraft suffered a sudden loss of power during landing, causing his plane to crash killing him and two crew members. 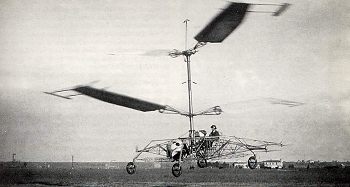 The technicians of Piaggio, led by engineer Corradino D'Ascanio, designed the DAT 3, the first helicopter in history piloted by man and with propellers mounted on a central joint (Vespa).

Second prototype of the Piaggio P.50 bomber in front of its hangar at Pontedera in 1939 (giemmesesto.org).

During the Second World War, Pontedera air field was first used by the Reggia Aeronautica and subsequently by the German Luftwaffe.
Between 10 June 1940 and 21 June 1940 it was home to 52° Stormo/22° Grupppo, flying Fiat G50s. In early November 1942 the airfield hosted 17° Gruppo, flying MC.202 'Folgore' fighters. The second half of July 1943 the airfield hosted 46° and 47°Gruppo flying Fiat CR42s.
The last Reggia Aeronautica unit to use the field was 274 Squadriglia, equipped with Piaggio P108 bombers.
It was severely bombed by the USAAF, who repaired the airfield when they seized control over it. They replaced the old gravel runway with concrete initially (yet later with asphalt), and turned it over for use by the Twelfth Air Force. First Allied unit to operate from the airfield was 11 Sqn South African Air Force, operating with Kittyhawk IV (P-40N) fighters, from 16 November 1944. They were soon joined by 414 Night Fighter Sqn (USAAF), operating Bristol Beaufighters, from 25 November 1944.
On 1 December 1944 P-47 Thunderbolts of 524 Fighter Squadron (USAAF) arrived at the airfield. Two more Thunderbolt squadrons arrived two days later: 522 and 523 Fighter Sqn (USAAF). New Years Day 1945 saw the arrival of 185 Sqn, 87 (United Provinces) Sqn. (both RAF) and 3 Sqn SAAF, operating Spitfires. 522, 523 and 524 Fighter Squadrons left on 21 February 1945.
416 Night Fighter Squadron (USAAF), operating A-36 Apaches, arrived at Pontedera (from Pisa) on 26 March 1945. 11 Sqn (SAAF) and 87 (United Provinces) Sqn (RAF) left Pontedera for Bologne on 25 April 1945. 185 Sqn (RAF) and 3 Sqn (SAAF) left for Villafranca di Verona on 30 April 1945.
414 Night Fighter Squadron left on 15 July 1945 for Bagnoli. The 416th Night Fighter Squadron, remained at the field until 13 August 1945 and then left for Linz-Hörsching in Austria. 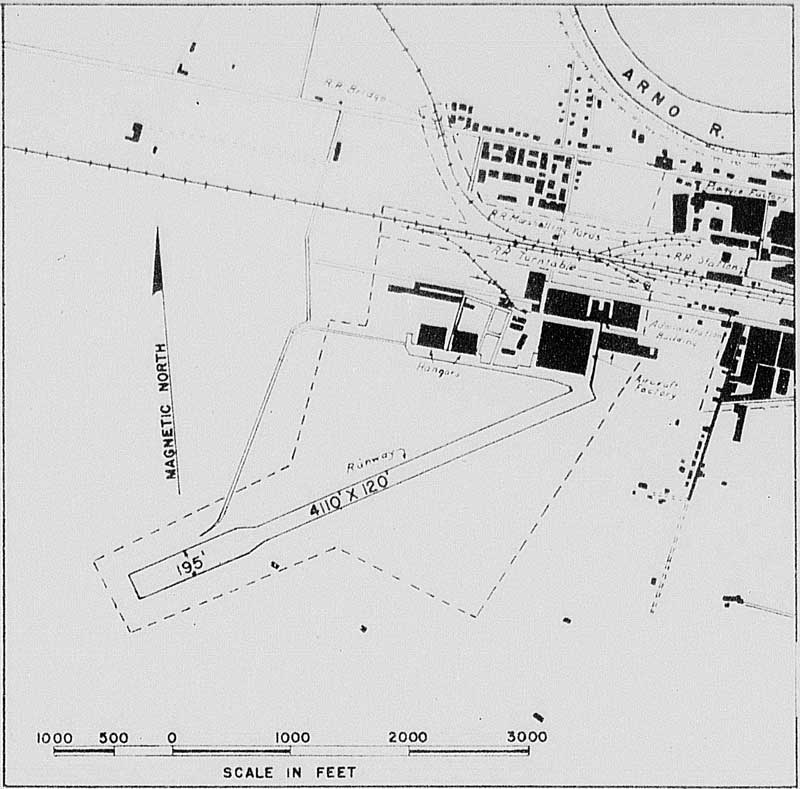 Pontedera on a September 1943 map assessing the airfield for Allied use (AFHRC, via Reid Waltman) 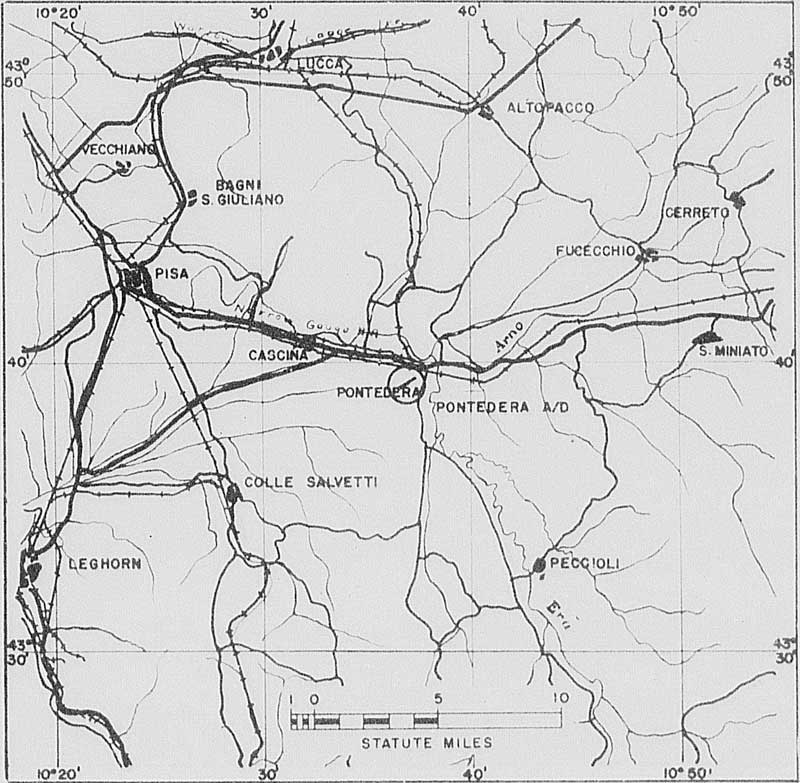 Pontedera relative to nearby towns on a September 1943 map assessing the airfield for Allied use (AFHRC, via Reid Waltman)

In the immediate post-war period the Piaggio aircraft company was converted to civilian use and began production of the famous Vespa scooter, conceived and designed by engineer Corradino D'Ascanio.
First Engineer Corradino D'Ascanio, who from 1932 was employed by Rinaldo Piaggio with the aim of devising new projects in the aeronautical field, was dedicated to the study of an aircraft with rotating blades that was to become the PD4 helicopter. The first prototypes of this new aircraft were tested on the track at Pontedera.
After the 1950s Pontedera airport gradually lost importance in favor of the nearby airport of Pisa. While remaining under the control of the Italian Air Force, it was managed by the Piaggio company who used the track as a testing ground for Vespas and other motorcycles produced in its factories. Piaggio also still produced aircraft parts, for instance for the F-104, MB326 and Alenia G222, however. Take-off of the prototype Piaggio PD4 helicopter, Pontedera, 05 August 1952. This helicopter was designed for civil and military markets, and was equipped with two rotors in tandem. Following an accident during testing the helicopter was seriously damaged and Piaggio decided to halt further development (State Archives of Pescara).

Until 2000, the track was the only remainder of the old airport, but it has been permanently dismantled since, although parts of it were still visible in aerial imagery in September 2010. The Via Hangar (Hangar Road) and the Via dell'Aeroporto (Airport Road) and the still existing railway line are the only things left that recall the presence of aviation in Pontedera, during the twentieth century. Additionally there is the historic restaurant "Aeroscalo" born as an inn for many airmen and dirigibilisti transiting the base of Pontedera. 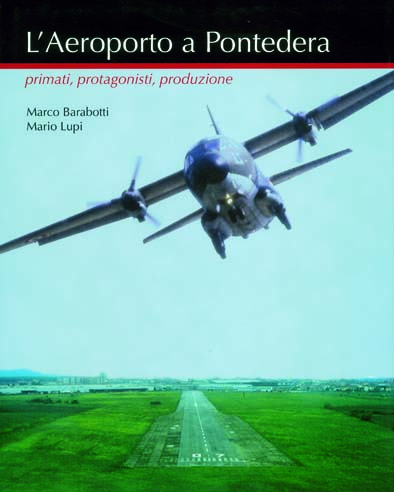 Cover of an Italian book about Pontedera showing a G-222 overflying the Pontedera runway (retrieved from bandecchievivaldi.com). 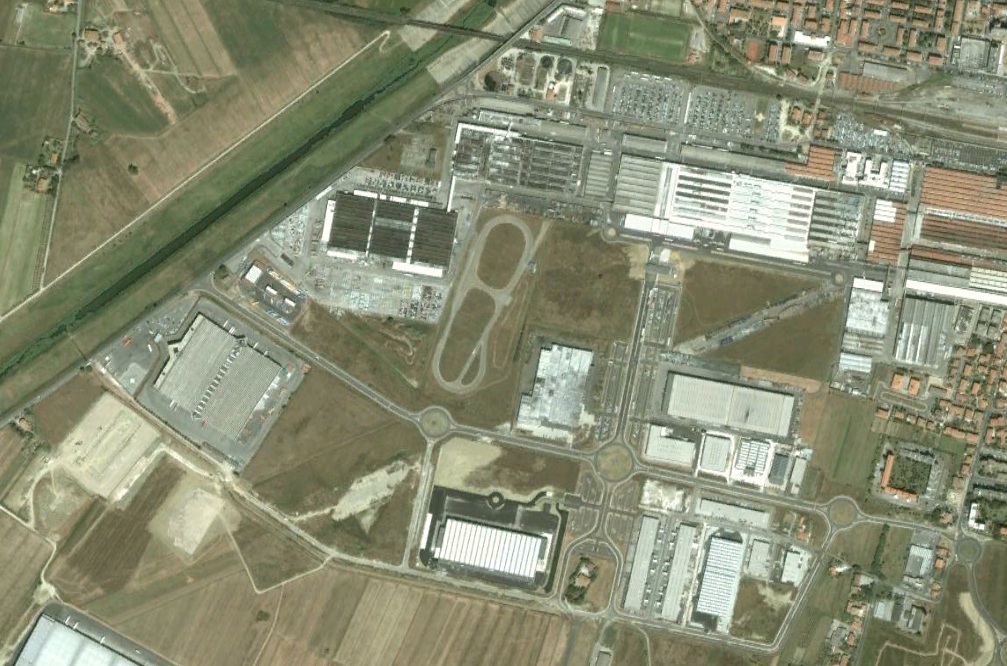 Pontedera in 2007, when major portions of the runway still existed 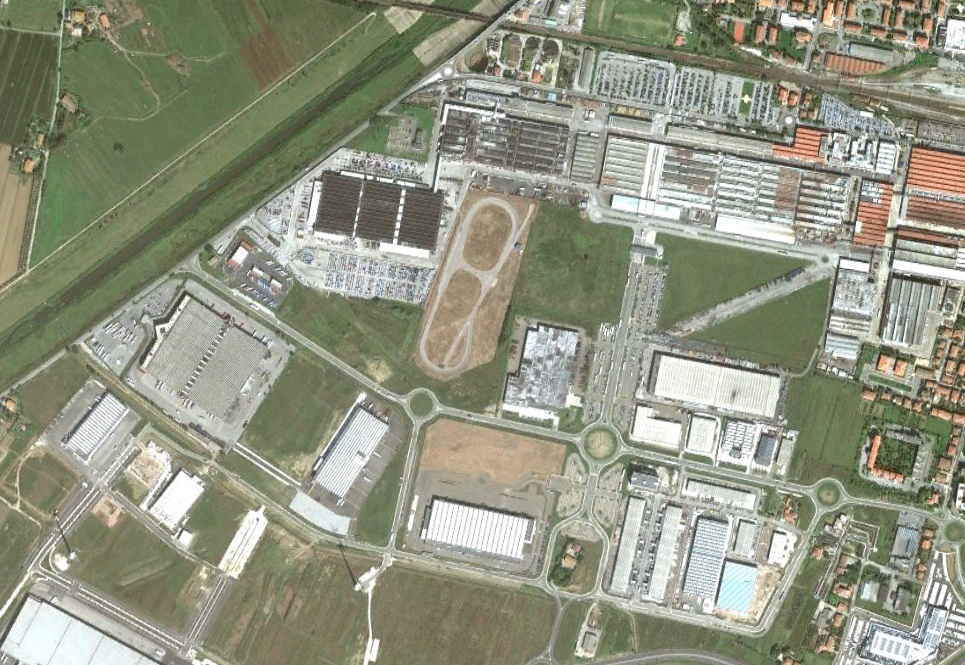 Pontedera in September 2010, the runway has almost disappeared.