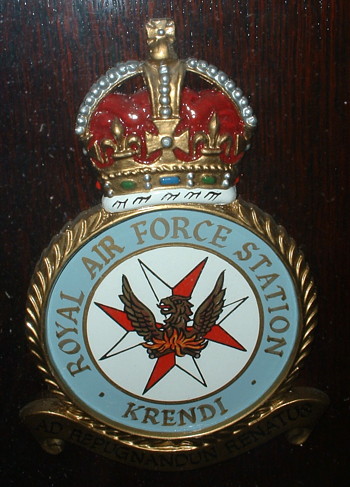 Qrendi airfield (also known as RAF Krendi or Q'rendi airfield) was an airfield 10 kilometers southwest of Valetta.
It was built as a second satellite airfield two-and-three-quarter miles south-west of Luqa airfield on the island of Malta. Construction began in 1940, with two runways approximately 1200x50yds (with 25yd grass strips on either side). 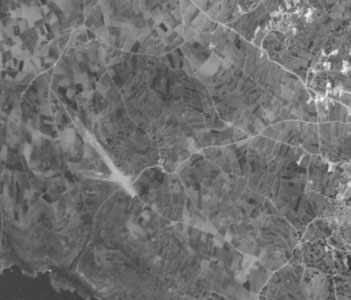 The airfield was opened as Air Station Krendi on 10 November 1942 by Air Vice Marshall Sir Keith Park by buzzing the airfield in his Hurricane while wearing his traditional white helmet. Soon it was nicknamed the airfield 'perched alongside of a cliff' for its proximity to the Maltese shore.
Over time, the airfield housed a total of 3 Spitfire squadrons involved in interdiction and reconnaissance work over Sicily before the actual invasion of that island. The aerodrome was an important site for converting the Spitfire into a fighterbomber, using two 500lb bombs under its wings. Initially they would dive bomb their targets after which they would support escorting aircraft in a strafing role. All three squadrons had relocated to Hal Far by 24 September 1943.
Although its runways remained in use (several emergency landings were made at the station) it no longer had flying units attached.
Instead, it became HQ of 284Wing in December 1945. Former RAF Station Krendi in 1942. Notice the many aircraft revetmets on the west side of the airfield (Collection Emanuel Muscat, via e-mail). 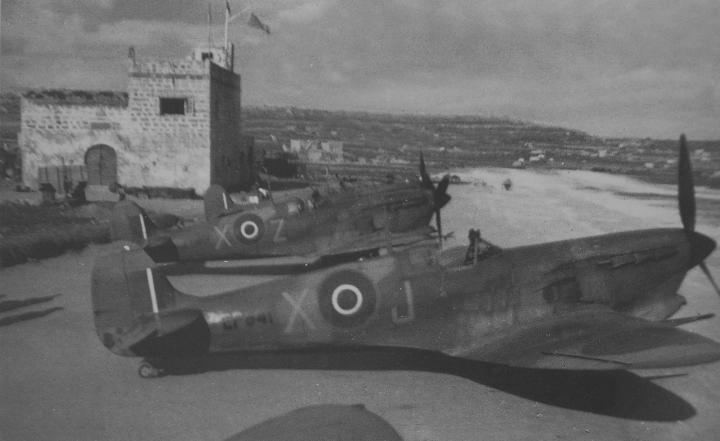 229Sqn Spitfire Vb aircraft lined up near the 'farmhouse' at RAF Station Krendi in 1943. The 'farmhouse' was used as a general purpose building including mess and HQ. It was demolished after the war to make place for new buildings for the Royal Navy. Used with permission. 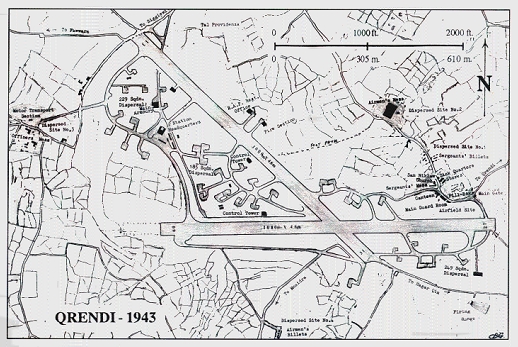 RAF Station Krendi stopped being an active airfield on 24 September 1943, when the last aircraft flew to Hal Far. It was home to the RAF Malta Meteorological Office until the British left Malta and served as a camp site by regiments of the British Army at the same time. 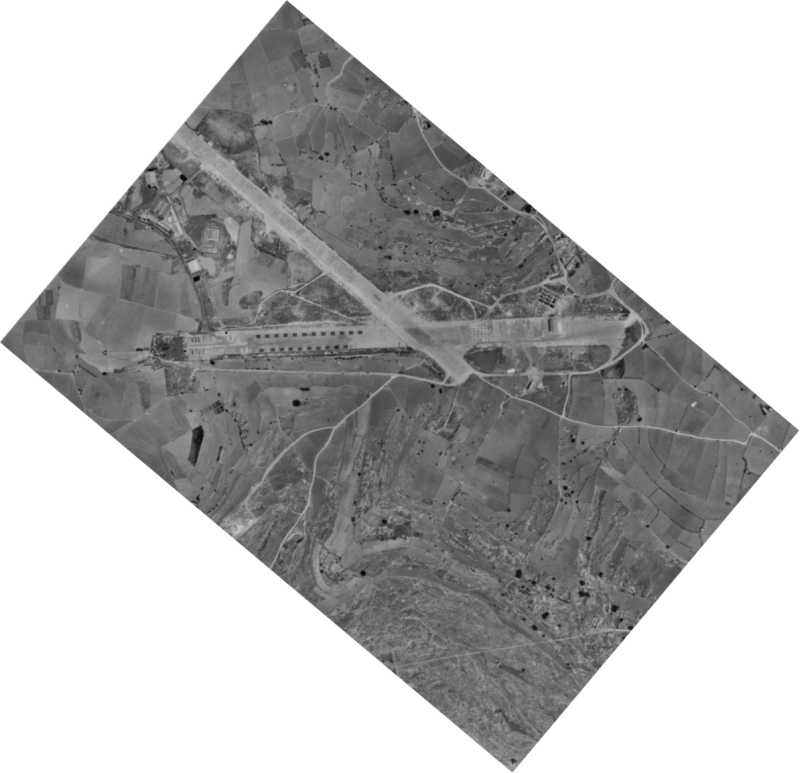 Undated photo of the former RAF Station Krendi. Brian Howett emailed me about the black boxes on the runway, stating they are stored Royal Navy sea mines, which were soon removed. He continued to state that for some time, the airfield was used by the Royal Navy as a "Rest Camp", with bicycles, tennis and other sporting kit available for crews "ashore". Brian worked at RAF Luqa between 1958 and 1960 and remembers a US C-47 Skytrain ('Dakota' if you're European) crash landing wheels up at the site. 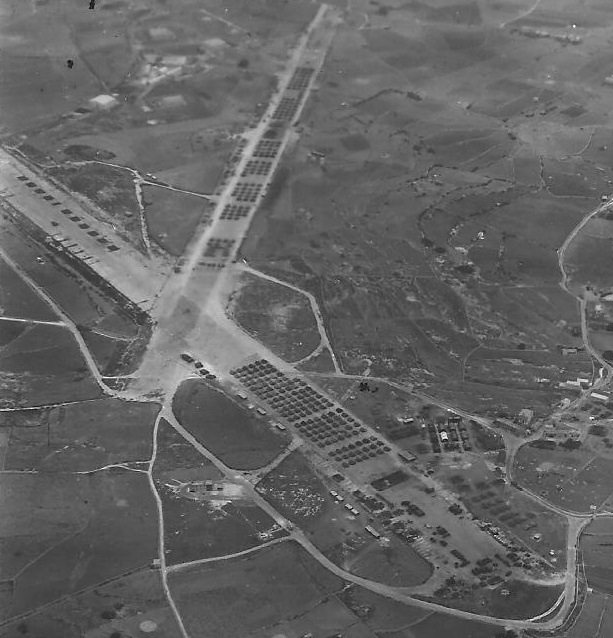 View of Q'rendi taken on 20 September 1953 during an aerial photography exercise. The vehicles were parked for later use in the Suez campaign. (David Prothero, via email)

Today the airfield is only recognisable from the air. Most of the buildings have been converted for other uses and according to serveral internet sources even most of the locals do not remember Qrendi as an airfield.
The aifields E/W runway has been built up, and the NW/SE runways was converted into a road. One hangar still existed in aerial photography in 2011. 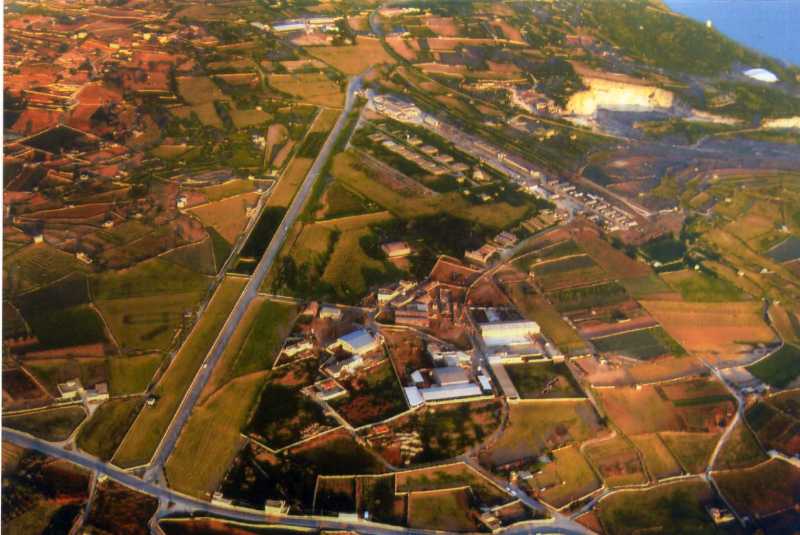 Birds eye view of former RAF Station Krendi seen from the west in 2009. Exactly in the center of the photoa single RAF hangar can be seen. 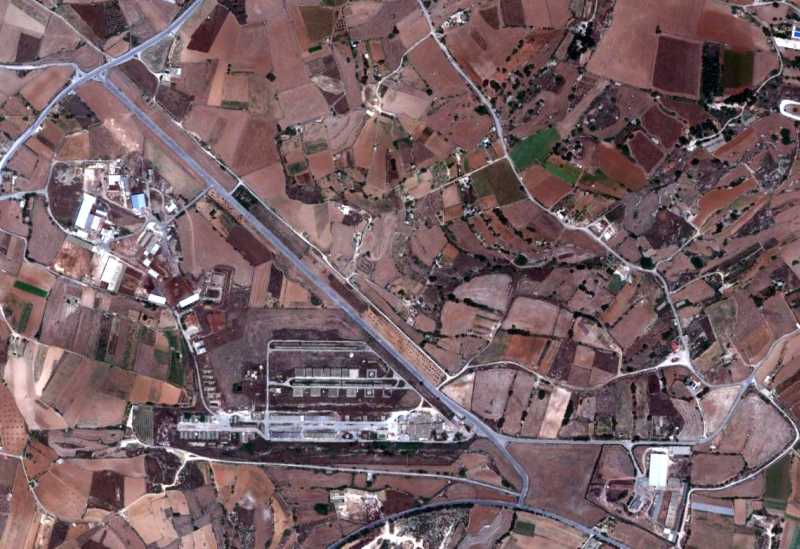