Air field Querqueville (l'aèrodrome Cherbourg-Querqueville, also known as ALG A-23C Querqueville) was an airfield 3 miles (5km) west of Cherbourg in Normandy, France.
The airfield was built immediately southwest of the Fort de Querqueville. It was opened in 1925 and served as a training and research airfield for the Aèronavale (French Navy). Among the units stationed at the airfield was the Section d'Entraînement et Servitudes de Cherbourg (Cherbourg Training and Utility Section - coded CB) operating NA-57 (Better known in USAAC service as BT-14 and in UK/Canadian service as Yale I). When the Battle of France was over, the airfield became a German Fliegerhorst. As such it was bombed several times by both the RAF and USAAF. That did not stop the Luftwaffe from using it though: amongst others it was used by JG2 Richthofen during the Battle of Britain.

Bf-109s of JG2 assembling for missions over England during the Battle of Britain in the summer of 1940. The fort in the background is the Fort de Querqueville. 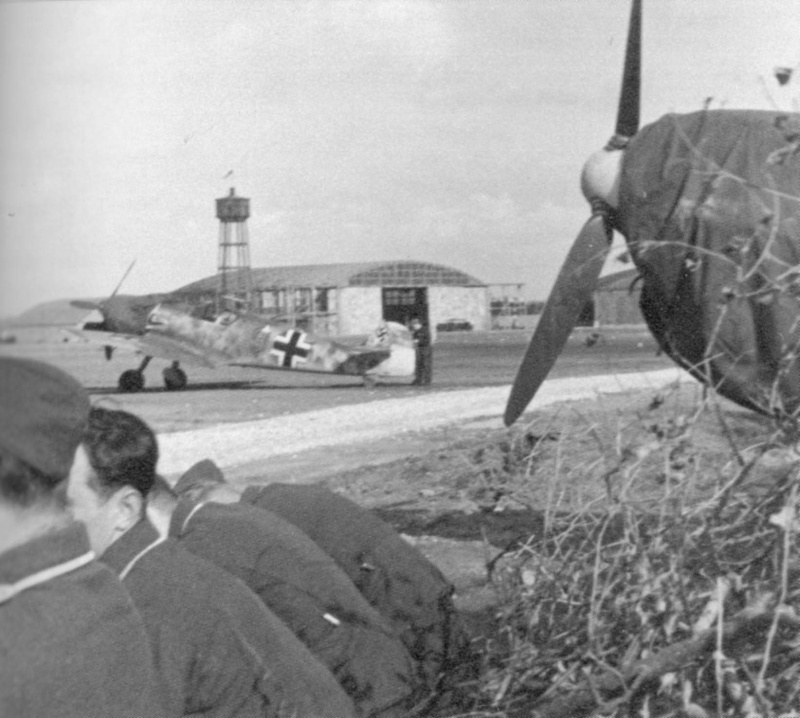 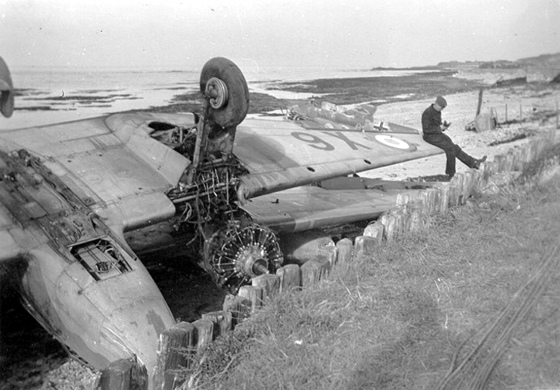 The beach at Querqueville near Cherbourg - ca. 1941. Potez 631 aeroplanes that had been captured during the Battle of France, had served for some time as decoys with German crosses painted on. Later the Germans pushed them onto the beach, presumably to make space at the aerodrome (Mr. Green's gallery).

In 1944, after Cherbourg fell to US forces following a lengthy battle, US IX Engineering Command, 830th Engineer Aviation Battallion began rebuilding the airfield. Assisted by 826 EAB they found and cleared 4500 landmines at the airfield. As the mines could not be detected by their mine detectors, this meant an extraordinary effort, for which the units' men were awarded with several Bronze Stars.
830EAB then proceeded to convert Querqueville into a transport airfield, designated ALG-23C. They constructed a large platform and managed to squeeze in a 4600x120ft runway. A hangar was repaired, only to be destroyed again by a B-17 in distress, and repaired a second time.
Querqueville was one of the longest serving ALGs in Europe. Immediately after the war is was used by both the RAF and USAAF as the location where captured German military aircraft were brought to in preparation to the transport to the UK and USA. This project was known as Operation LUSTY (LUftwaffe Secret TechnologY) 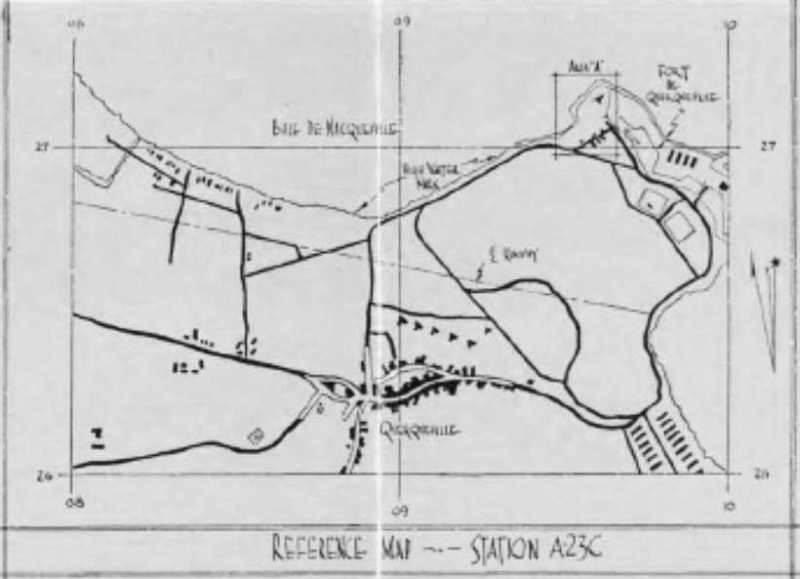 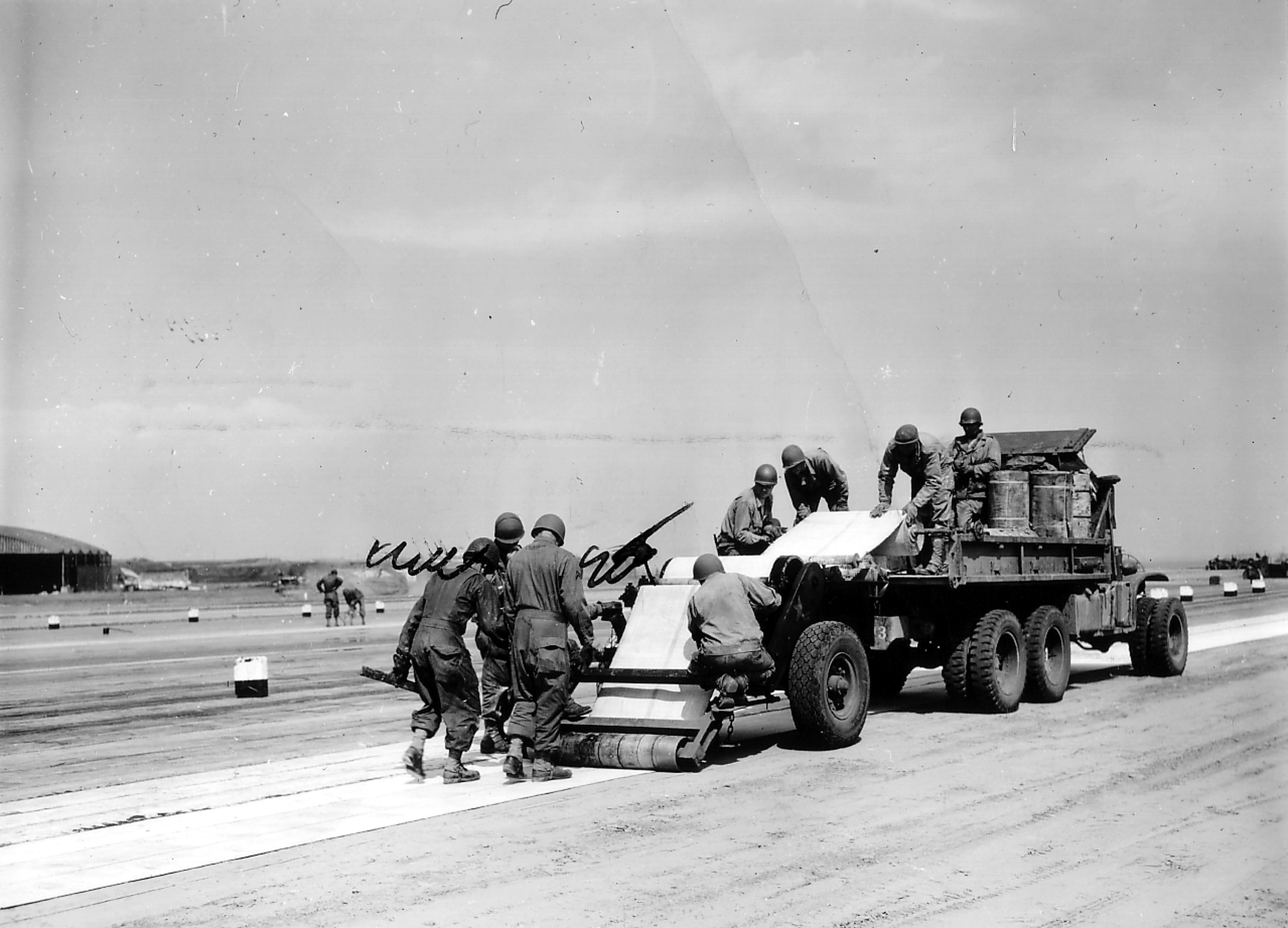 A more subtly censored version of the photo above. Clearly, something was in the photo that was not to be seen,  possibly a radar site (PhotosNormandie, on Flickr). The airfield ultimately closed on 8 Aurgust 1945. It was handed over to the Aeronavale who used it until 1948. It was then put on a Care and Maintenance status. It was finally closed in 1966. Since, the area has changed very much, with a Defence academy and a new suburb having been built over the site. Some taxitracks, concrete hangar floors and some modereate scarring of the soil west of the academy are all that remain of the former airfield. 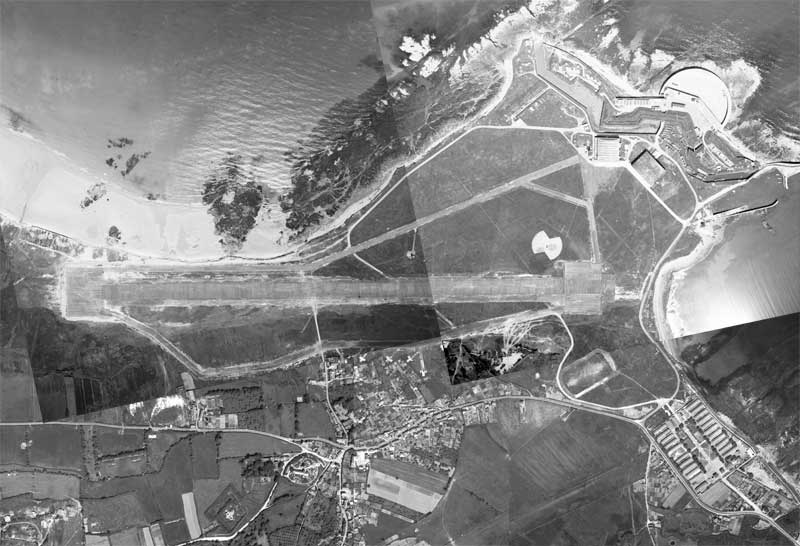 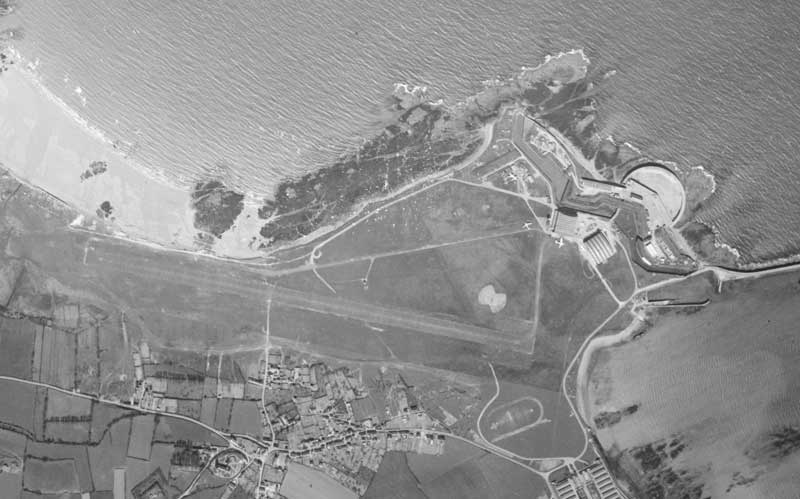 Querqueville photographed on 22 April 1955. Two transport-size aircraft can be seen in front of the hangars, 4 more   airframes appear to be discarded in the triangular area north of the transports (IGN). 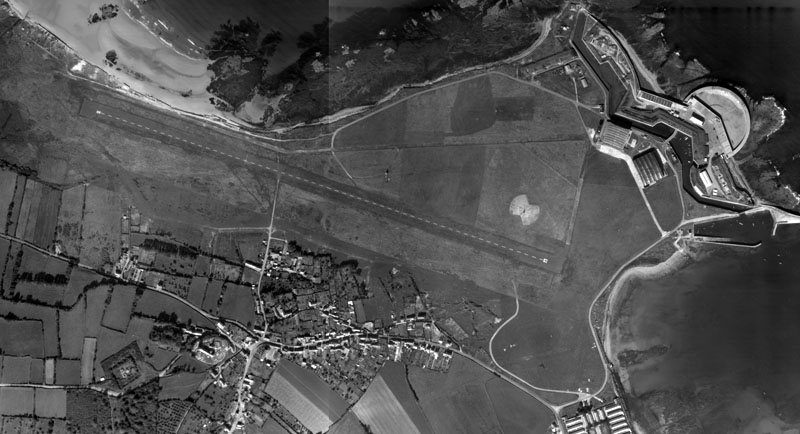 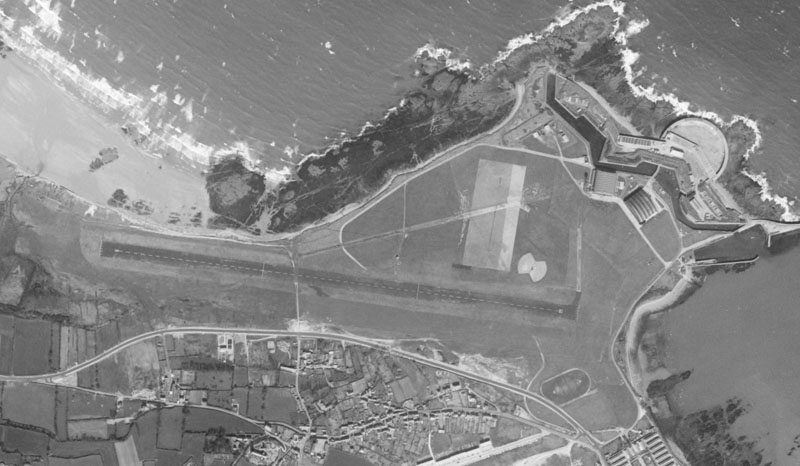 Querqueville, March 1965, a year before the airfield closed for good (IGN). 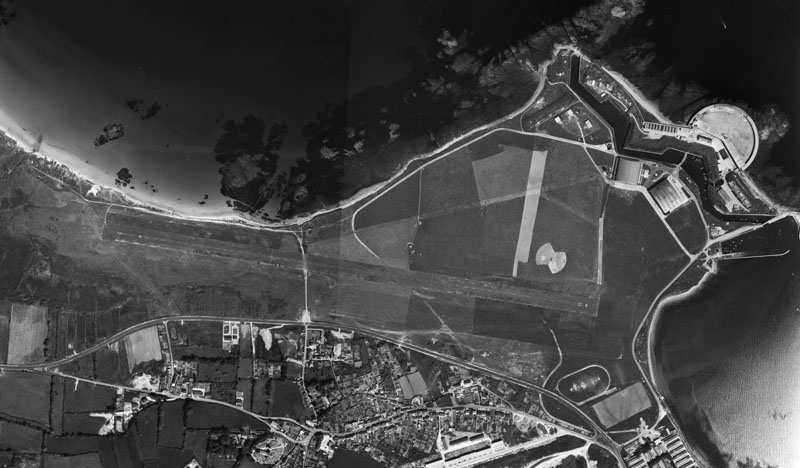 Querqueville in 1966, shortly after the airfield was permanently closed. White Xs were painted on both ends of the runway (IGN).

The former Querqueville airfield is now the Ecole des Fourriers of the French Ministry of Defense (defense.gouv.fr).