Although the airfields of Rechlin and Lärz were two seperate airfields, their histories are so intertwined and their locations so close to one another I will handle them as a single installation.
In November 1916 the Prussian War Ministry announced its intention to set up an aviation test facility on the banks of Lake Müritz in Mecklenburg-Vorpommern in Germany. Acquisition of the neccesary grounds took some time, but on 29August 1918 the terrains official designation was finally changed, and in Oktober the first test flights took place with Prototype 11 of the Fokker D.VII.

After the end of World War I the facility was dismantled, as the Versailles Treaty banned the German Empire from developing and construction of aircraft. Germany soon circumvented the Versailles Treaty by signing an agreement with the Soviet Union, allowing the Germans to do research in Lipezk. The State Defence leadership did not find this sufficient though and wanted Germany to have its own research facility.
When Germany joined the League of Nations in 1925 the restricting articles were lifted and by autumn the reconstruction of the test facility was started. By 1926 the first hangars and work and living quarters were built, followed by two Junkers hangars and an engine test stand in the period until 1933. During this period the airfield at Lärz was used for recreational flying.

When the National Socialists seized power in 1933 huge amounts of money began flowing to Rechlin. From the entire Empire technicians and engineers were ordered to Rechlin, and to house them and their famillies new homes were built at "Rechlin-North" and "Vietzen". Around the round airfield at Rechlin four clusters of buildings were construed: North (support), South (engine testing), East (munitions and weapons) and West (technical and barracks). The airfield was (like all wartime German airfields) connected to the national railway grid by its own railway line. To support the construction workers camps were set up at "Vietzen" and "Retzow" for the State Workers Service (german: Reichsarbeitsdienst), which later housed Italian labourers.
By the end of the war part of the camp Retzow was transformed into a concentration camp, housing women from the concentration camp "Ravensbrück" who were forced to work at air base Lärz.

On 26 February 1936 the State Defense Minister Blomberg ordered the gradual opening up of the Luftwaffe, and Rechlin became officially known as the Test facility of the Luftwaffe, a field unit of the technical branch of the State Aviation Ministry (german: Reichsluftfahrtministerium) in Berlin. Part of the tests were done as a normal means to verify the usabillity of aircraft and their associated support. Additionally the facility also performed research flights with new aircraft types, setting the standards for speed, range, manoeuvrabilty and so forth. Furthermore research was done on maintenance, ergonomicality and other aspects that might influence operational use with front line units.
From 1939 tests with the worlds first jet aircraft (the Heinkel He178) began. That same year Lärz got its new all concrete runway (08-26) followed by the second equally long runway (15/33).
Rechlin-Lärz was at the forefront of aviation technology, improving avionics, materials, procedures and developing new technology. They developed fixed wing rescue of airman at sea, ways to improve lubrication in colder climates, jet-engines, airborne radios and on 3 July 1939 they flew the worlds first rocket powered aircraft. During tests in 1943 they even were the first in history to use an ejection seat from a twin jet Heinkel He280V1.

Next to the pure technical research the facilities were also testing usability in the field, especially after World War II had begun. This is what led to Test Command Lärz (german: "Erprobungskommando Lärz"), which operationally tested the so-called null- or preproduction series aircraft at Lärz. From 1944 the testing of jet aircraft such as the Me262, Ar234 and He162 received top priority. The test facility did not just test domestic aircraft though: during the war years they also tested Allied aircraft that had been captured.

Rechlin-Lärz did not receive any attention from the bomber war until 1944. In May 1944 it was under attack for the first time, although it was only a secondary target at the time. The US 8th Air Force had its first planned attack in August 1944, limiting testing progress. Testing stopped altogether after the last attack in April 1945, but Me262s of Fighter Wing (Jagdgeschwader) 7 and Fw190s of Fighter Wing (Jagdgeschwader) 4 were still using the airfields against bomberformations and the Red Army until the early days of May 1945. In the days before 2 May 1945 the remaining test facilities were destroyed after which the airfield surrendered to the Red Army who used it for their Il-2 Schturmovik during the battle for Berlin.

After the war Rechlin-Lärz became a Soviet garrisson. As the airbase at Lärz had concrete runways it became home to a fighterbomber wing and later a helicopter wing was added. Over the years Lärz became home to the 165 Fighter Regiment (La-9 and MiG-15), which were followed up by 33 Fighter Regiment (MiG-15, -17 and -19). From 1956 the staff company of 125 Fighter/Fighterbomber Regiment based its An-2 at the airfield. 33 Fighter Regiment was relieved by 19 Guard Fighterbomber Regiment in 1961, flying MiG-17 and Su-7, and later MiG-27 aircraft. Between 1969 and 1987 344 Helicopter Squadron was added to the base, until relieved by the 3rd Squadron of 439 Helicopter Regiment. For short periods of time other units of 16 Air Army were also stationed at the base. The officers and their families were housed in Vietzen (current day Rechlin), and the soldiers in the former barracks of the West Group of the research site.
At the facilities close to Lake Müritz the shipyard Rechlin was founded in June 1948, building and reparing boats but also homes. By 1980 the shipyard had built some 8000 boats, half of which lifeboats, and by the end of the Cold War it had about 1100 employees making it one of the largest emploeyers in the region. The rest of the Group North facilities were used by an East-German Peoples Army (Nationale Volksarmee, or NVA) communications facility.
In March 1993, after 48 years the 19th Fighterbomber Regiment of the Russian Air Force (heir to the old Soviet Air Force) left Air Base Lärz, and the facilities at Rechlin were abandoned by fall that same year. The final cargo flights to Russia by An-22 and Il-76 took place in July 1993. 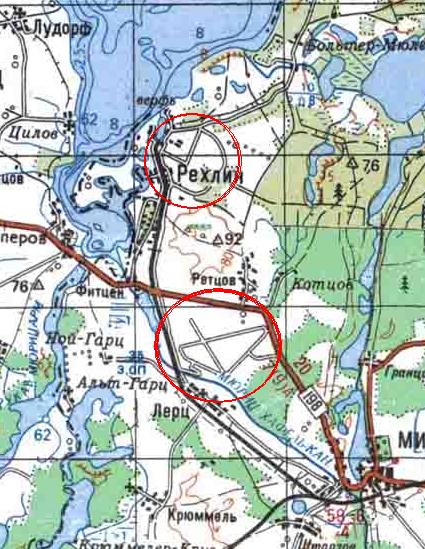 ca. 1987 Soviet map depicting the Rechlin-Lärz area. Note the absence of any reference to the airfield complex, the runways being depicted as roads.

Photographers were taking huge risks while photographing MiG-27 fighters at the Russian air base in Lärz, 1992. 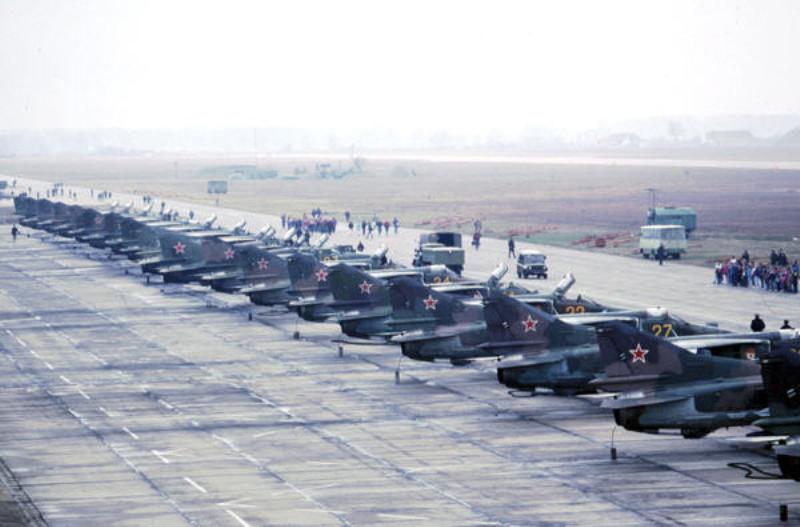 From one day to another the Russians had no authority in former East Germany anymore, and west European aircraft spotters began flooding their airbases, even during operations, as shown here in front of a row of MiG-27 Floggers. 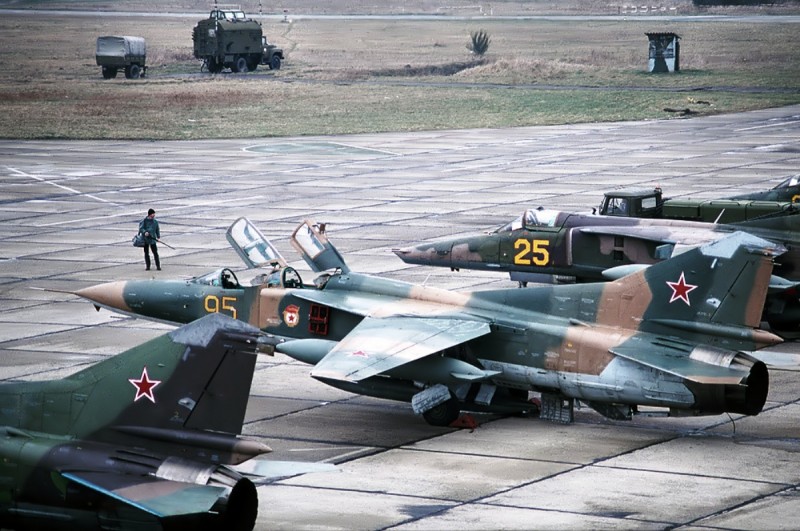 Lärz became a civilian airfield again in 1994. The runways were shortened by 300 meter to 2080 meter and large parts of the old Soviet infrastructure were torn down or blown up, although their remains were never removed. A large part of the airfield was bought by a civilian company which holds the Fusion Festival at the site each year. Twelve shelters at the base are still intact. One of the is the old nuclair storage shelter. Both facilities hold parts of a modest aviation museum. Among the exhibits are a MiG-21 and a Brequet Atlantic. 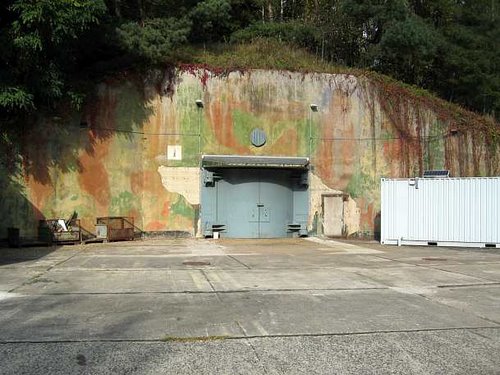 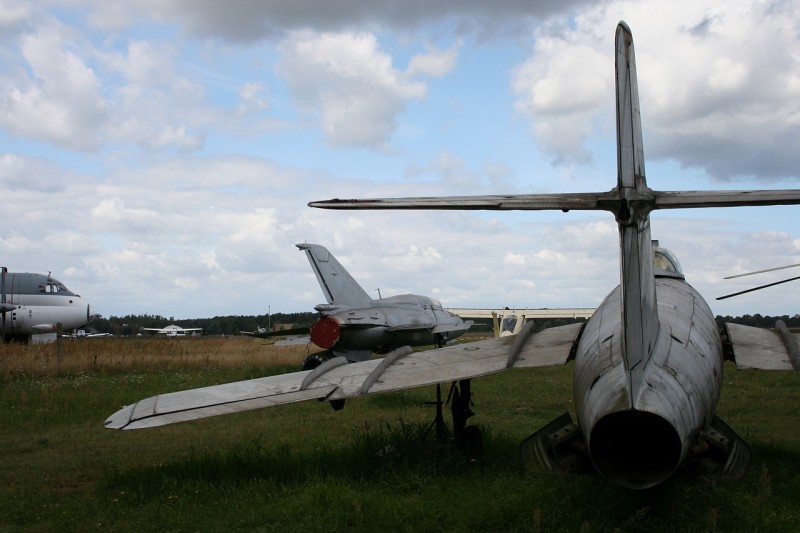 Luftwaffe Atlantic (left) and two MiGs at the aviation Museum at Lärz. 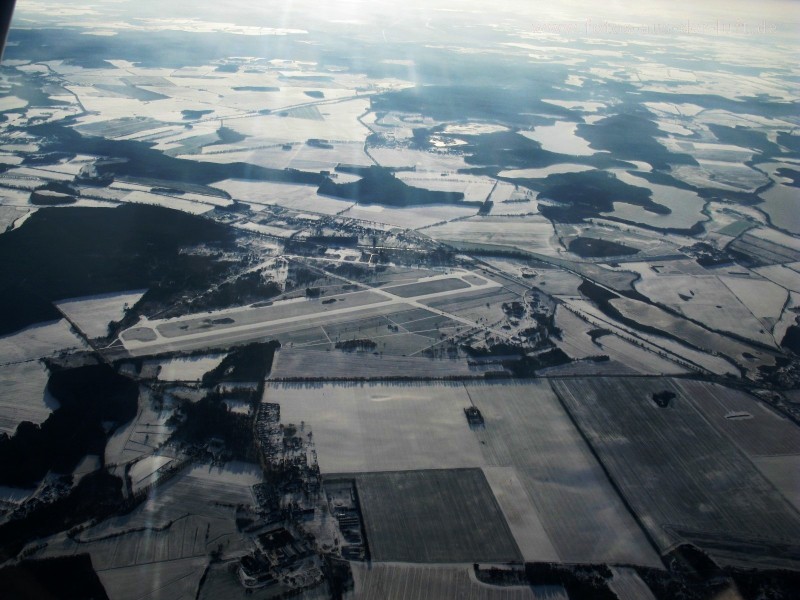 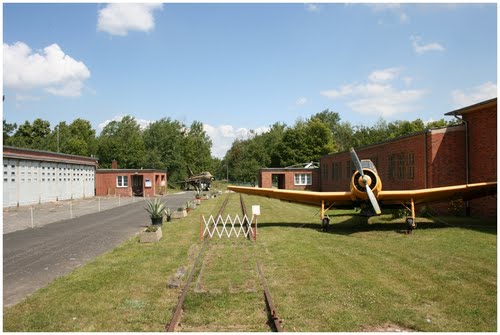 The Aviation Museum at Rechlin-North, showing the railway line that continued to be used well into the Soviet era. 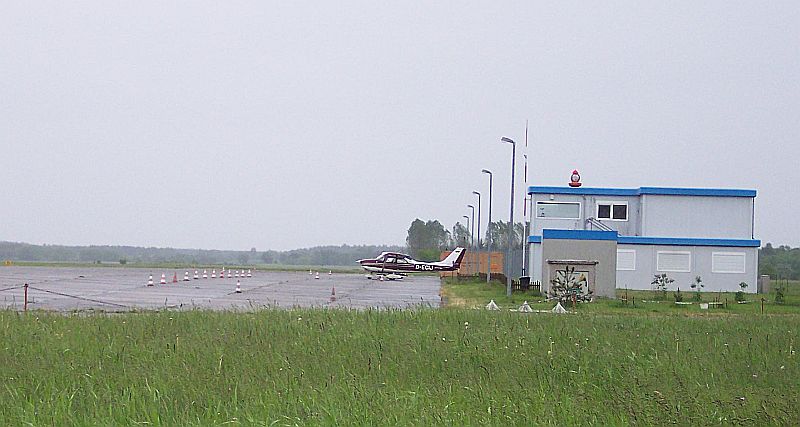