Airfield Saint-André-de-l'Eure (French: Aérodrome de Saint-André-de-l'Eure, also known as advanced Landing Ground B24, ICAO: LFFD) is a small airfield 80km/50mi west of Paris, 10km south of Evreux.
The airfield was built in the 1930s as a regional airport in Upper Normandy, probably with a grass circular airfield. During the Battle of France in 1940 it was seized by the Germans. During the occupation of France they used the airfield as a major Luftwaffe combat airfield. It was initially used by Jagdgeschwader 2 (JG2) during the Battle of England during the summer of 1940. It was then left unused for a year during the construction of concrete runways, taxiways and other permanent facilities. Likely it was also connected to the Evreux-Dreux railway line, which still existed at the time.
When the Luftwaffe returned it was used by bomber units between July 1941 and April 1942. Known units to have used the airfield were:
Kampfgeschwader30 (KG30) flying Junkers Ju88A.
Kampfgeschwader55 (HG55) flying Heinkel He111H.
Both units flew night bomber attacks on England.

From July 1942 Saint-André-de-l'Eure was mainly used as an interceptor airfield against the Allied bomber offensive against Germany. Two fighter units known to have used the airfield were JG25 and SKG10, both operating Focke-Wulf Fw190A. The fighters remained until June 1943, when the airfield closed down for upgrades and repairs.
The airfield was regularly attacked in 1943 and 1944 by Ninth Air Force bombers and fighters. B-26 Marauders and P-47 Thunderbolts would sweep the airfield with machien guns and bombs to keep German interceptors grounded while heavy bombers of 8 Air Force flew over to attack Germany. Upon their return to England P-51s would sweep the airfield again and attack any target of opportunity. The airfield was operational again from April 1944. Many units used the airfield, flying Me410A, Ju88A, Ju188A and Bf109G until they were driven off by the Allied ground offensive.

When the German Army was driven from the area the US IX Engineer Commands 877th Engineering Aviation Battallion moved onto the airfield. They began repairing the runways by pouring concrete over the damaged runways. The airfield was turned over to the British and redesignated ALG B-24. For the remainder of the war the airfield served as a RAF and Commonwealth fighter base. Between November 1944 and September 1945 it was also used by the USAAFs 442 TCG flying C-47 Skytrains. 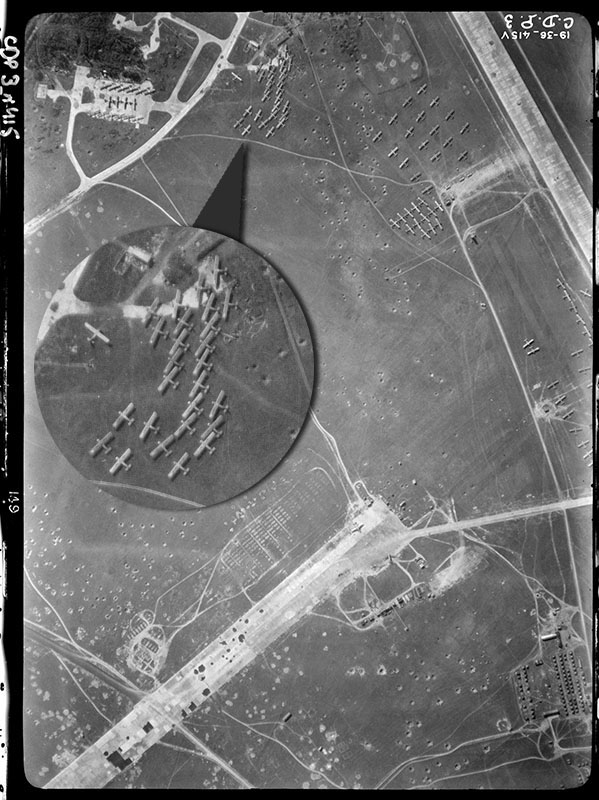 Aerial view taken on 30 september 1945 - Many light liaison aircraft are parked on the airfield. (Source: ign.gouv.fr)
Note: the photo is intentionally misdirected to show more details on a minimum width.

In September 1945 the airfield was returned to French control.

After the war, the airfield was assigned to the Centre d'Essais en Vol (CEV) in Villacoublay. The unit provided training on dual engine (Nord Martinet) and single engine (Nord 1100 and Sipa) aircraft.
In 1957 the Aéro-Club de l'Eure (ACE), was founded. It was renamed the Club Aéronautique de Saint André (CASA) in February 1960. The CEV left the airfield in 1975. The aeroclub then became a rather famous one. It became one of the few to actually invite a warbird flying (a foolishness, accoring to many members). The Corsair, made famous by the television series Baa Baa Black Sheep unfortunately could not fly during the airshow, much to the disappointment of invited schoolchildren. The British pilot made up for it about a week later. His plane repaired, he made a couple of low passes over the children's school... during their English classes!. A few years later the club managed to charter the Concorde Supersonic airliner for two consecutive days (18 and 19 June 1988) for invited guests and a flyby over the airfield. 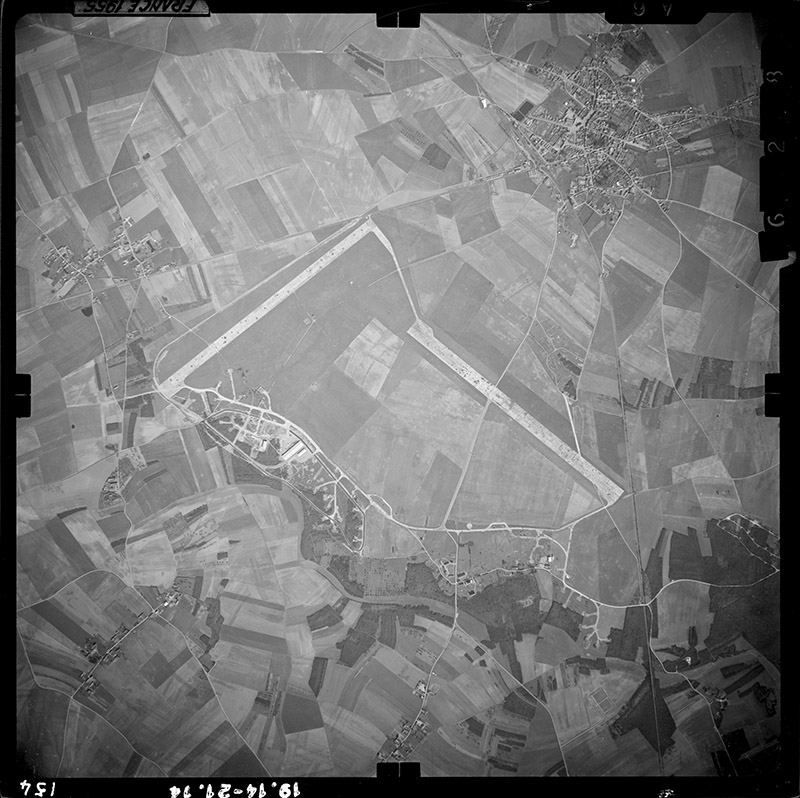 Saint André in 1955, when the airfield was in use as a flight test center of the French Air Force (Source: ign.gouv.fr)

Today it is a modern provincial airfield in use for light aviation and glider aircraft. It features two grass runways: one for general aviation, and a second one for ultralight aircraft. Its wartime history cannot be overlooked though, as both concrete runways still remain. The extreme east end of the 13/31 runway serves as a runway for model aircraft enthousiasts. The many patched over bombcraters are still evident, with some vegetation growing out the cracks. Many taxiways and dispersals also still exist in the surrounding area southeast of the airfield. 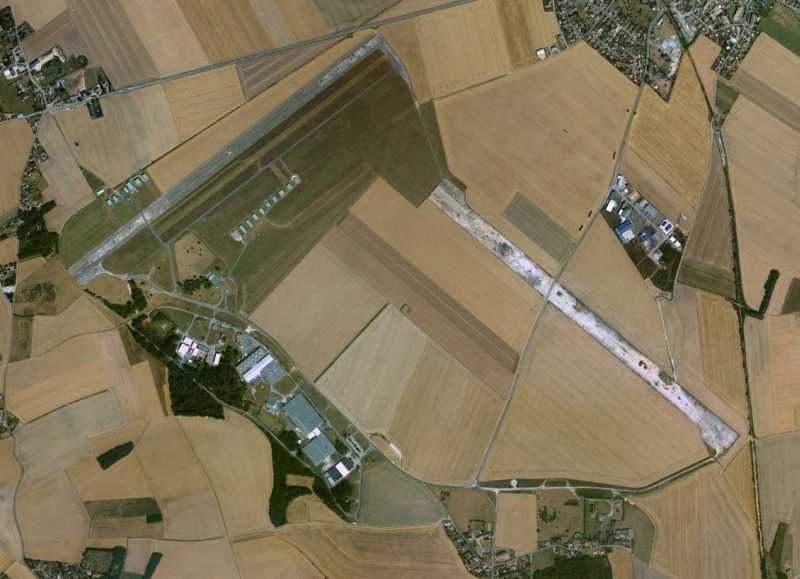 The airfield of Saint-André-de-l'Eure in 2005 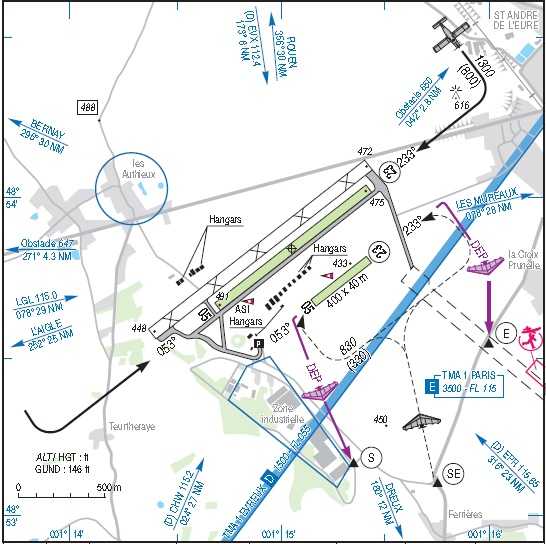 Approach Chart of Saint-André-de-l'Eure in 2011 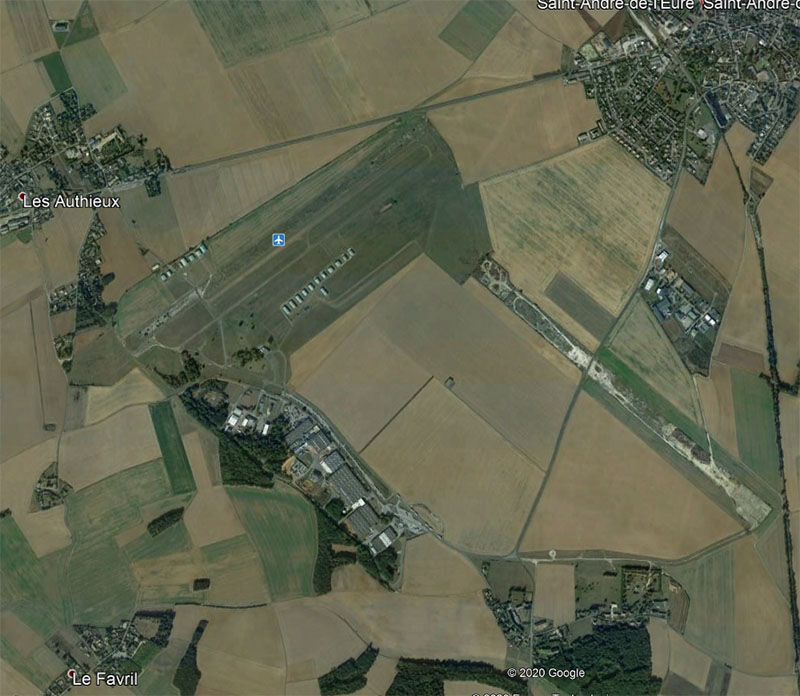