Airfield Schijndel (Dutch: vliegveld Schijndel, also known as vliegveld Eerde, also known as Advanced Landing Ground B-85 "Schijndel") was an advanced landing field situated between the town of Schijndel and the village of Eerde in Noord-Brabant, the Netherlands.
The airfield was constructed during the aftermath of operation "Market-Garden" and was supposed to be ready in time for operation "Veritable", the final assault across the Rhine into Germany. Construction of the airfield began on 10 december 1944 when lands were ordered and mine-clearing tanks began the task of clearing the fields just south of the railway line Boxtel-Gennep. Before Christmas the mineclearing had advanced enough to allow sand to be poured for the construction of a 1500x40m runway made of asphalt. About 1000 men, half of them British, the other half local labour were working on the airfield. When an asphalt runway proved to be too difficult the engineers opted for a PSP runway.
Schijndel was intended for one single Wing, with dispersals and a mixed tent/barracks village, but with no hangars. It was supposed to be ready for service by January 15 1945, but difficulties moved this date to 6 February by which date, although far from complete, operational needs required the use of the airfield.

By the time the airfield opened it had been decided Schijndel was to house not one, but two Wings, with 4 squadrons each. So it became home to 132 (Norwegian) Wing, consisting of 66Sqn (coded LZ), 127Sqn (9N), 322 (Dutch) Sqn (3W), 331 (Norwegian) Sqn (FN) and 332 (Norwegian) Sqn (AH), coming from Woensdrecht. The other Wing was 145 (Free French) Wing, consisting of 74Sqn (4D), 329 (Free French) Sqn (5A), 340 (Free French) Sqn and 345 (Free French) Sqn (2Y), coming from Antwerp-Deurne.
145 Wing inaugurated operations coming from Deurne on 6 February 1945, 132 Wing arrived on 14 February. On 2 March 1945 322Sqn got a new squadron commander at Schijndel: Bob van der Stok (survivor of the famous 'Great Escape' from Stalag Luft III) flew in on a Dakota (RAF C-47).
On 6 March 74Sqn flew an uneventful VIP escort mission, in support of Sir Winston Churchill who was flying back to England.
On 12 March 322 (Dutch) Sqn flew a VIP mission to bring Queen Wilhemina of the Netherlands back to mainland Europe, she landed at Brussels Evere airfield. On 1 April 1945 both Wings received orders to go 'all out' in their armed reconnaissance missions: "Every risk of bad weather, flak, crosswinds must be accepted." Both Wings sustained casualties: On that one day alone 132 Wing lost 6 of its pilots, and 145 Wing did not fare that much better. 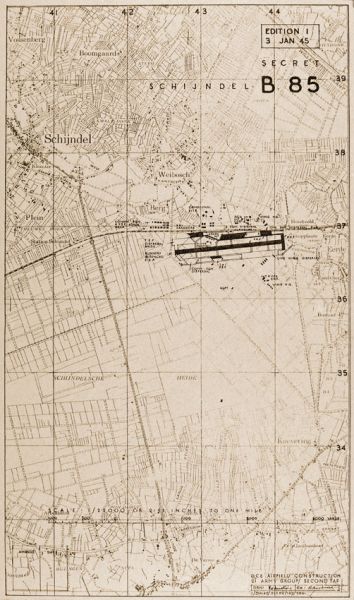 Allied map of B85 Schijndel as is was on 3 january 1945 (Netherlands Institute for Military History - NIMH, Netherlands Ministry of Defense) 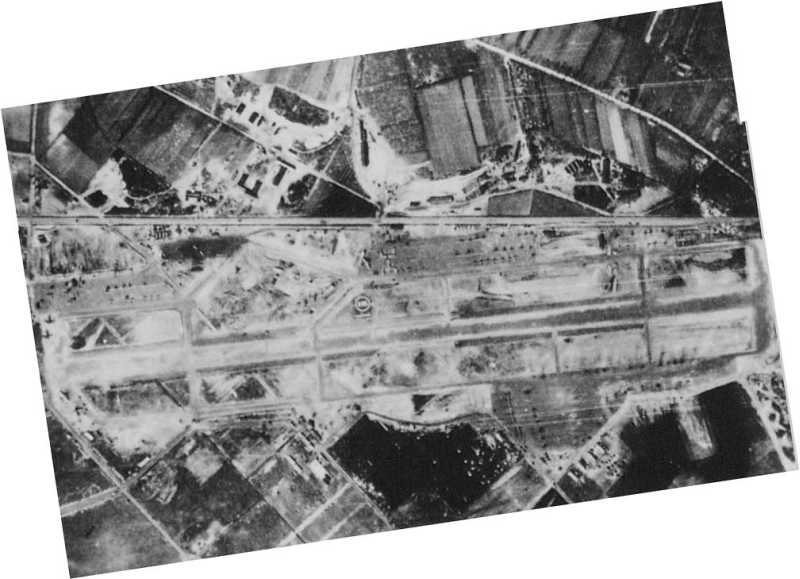 Schijndel airfield as it was in early 1945, showing some Dakotas (RAF C-47) and a large number of fighters at the airfield (RAF, via Brabants Historisch Informatie Centrum and Peter van Kaathoven). 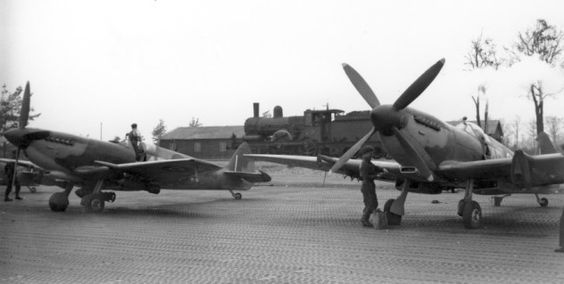 74 Sqn Spitfires parked near the railroad between Boxtel and Gennep at Schijndel in March 1945 (74 (F) Tiger Squadron Association, used with permission). 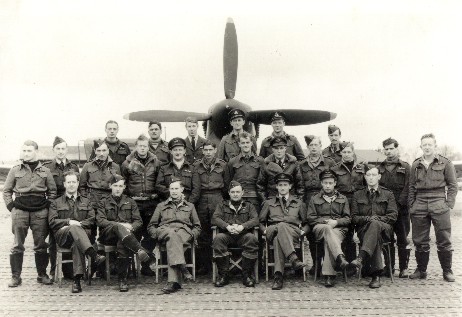 74 Sqn aircrew posing in front of one of their aircraft at Schijndel in March 1945 (74 (F) Tiger Squadron Association, used with permission).

145 Wing received orders to move to their new 'home' at Drope (B-105) on 13 April. The Wings' 74 Sqn moved on the 16th, while 340 Sqn and 345 Sqn were still flying missions from Schijndel. 132 Wing moved to Twenthe, their last crews left Schijndel on the 20th, ending two months of operations and noise.
Slowly but surely the local population began tearing down the baracks, leading to an official notice on 14 August that trespassers were to be shot. The first grounds were returned on 22 March 1946, effective 25 November 1945. With immediate effect the grounds were required by the Dutch 6th Company Security batallion, so the owners still would not get their lands back, a situation that lasted until late in May 1946. Damages to the owners were finally settled in 1951.

Today, nothing remains of the former airfield. The terrain has been converted into an industrial area. Three streetnames remind us of what happened here: the Vliegveldweg (Airfield road), Landingsweg (Landing road) and Dakotaweg (Dakota Road).

Special thanks to Peter van Kaathoven for providing me with details of this airfield!