Air field Silloth (also known as RAF Silloth) was an airfield 434kilometers northwest of London, England.
The airfield was built in the pre-World War II 'Expansion Period' and completed in 1939. As a result of the period it was built is had to meet certain architectural criteria which differed greatly from what was later built during the war.
The airfield opened as a Maintenance Control Station (22MU) in June 1939, but was soon assigned to the Coastal Command Group Pool. Ansons, Beauforts, Bothas and Hudsons were assigned as aircraft. 215 Bomber Sqn with Ansons and Wellingtons operated from the field. When the Royal Aircraft Eastablishment (RAE) used the airfield to experiment with flares dropped by a HP Hampden in 1940, the airfield was promptly bombed by the Luftwaffe.
In April 1940 the unit was given the designation No.1 Operational Training Unit (OTU) (Lockheed Hudsons and Ansons). It was also used for the film 'Yanks in the RAF' and suffered several air raids by the Luftwaffe.
In 1941 the airfields was expanded with 3 concrete runways and 18 hangars. It got disperal areas to the north, northwest, southwest and southeast of the runway system. The first USAF Liberators landed at the base too. Between October 1941 and April 1942 the base was also home to a detachment of 320 (Netherlands) Sqn, flying Lockheed Hudson IIIs. 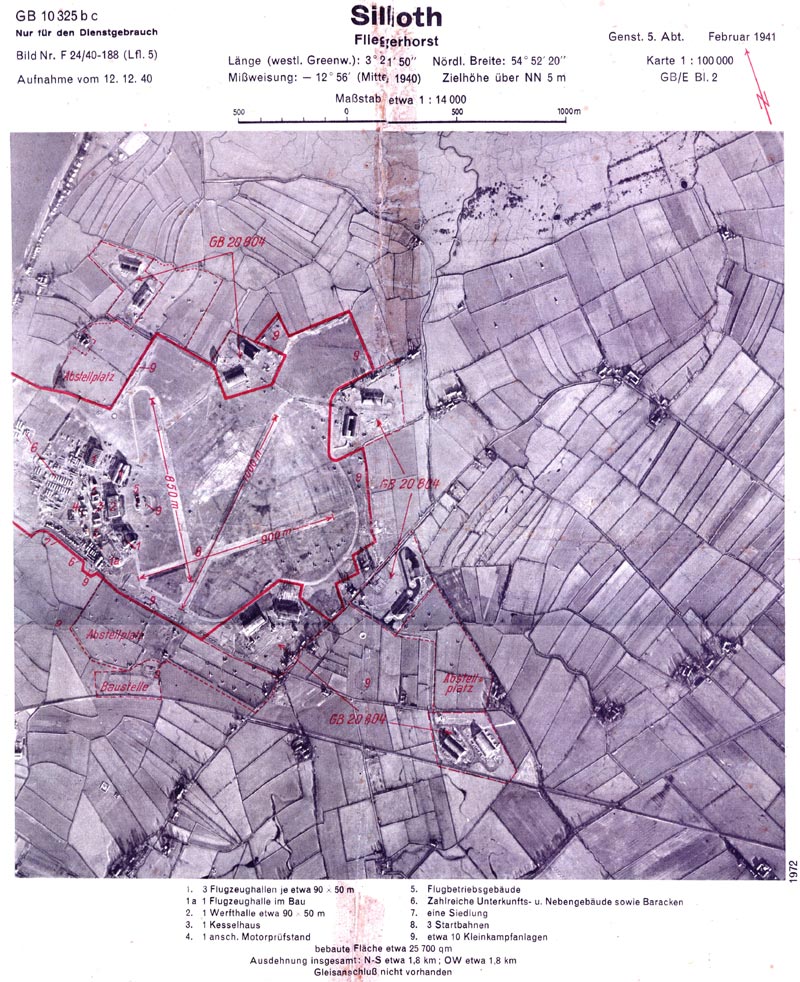 Aerial reconnaissance photograph of Silloth aerodrome, taken by the Luftwaffe in 1941. They appeared to know everything: Where the guns were, the hangars and other buildings. Follow the link to Mr. Barnes to find out how this photo was discovered. (Luftwaffe, via Russell W. Barnes) 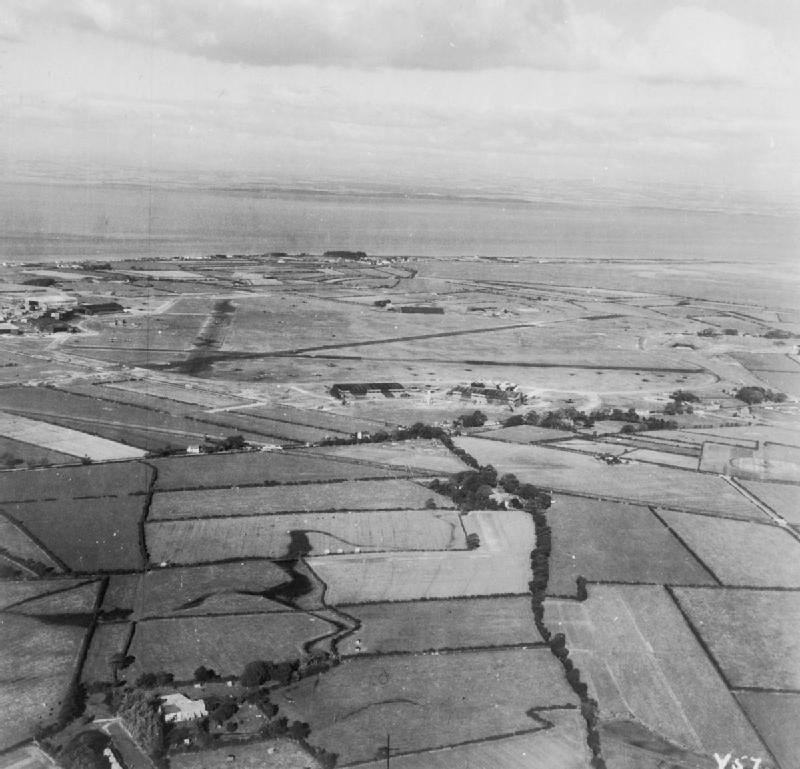 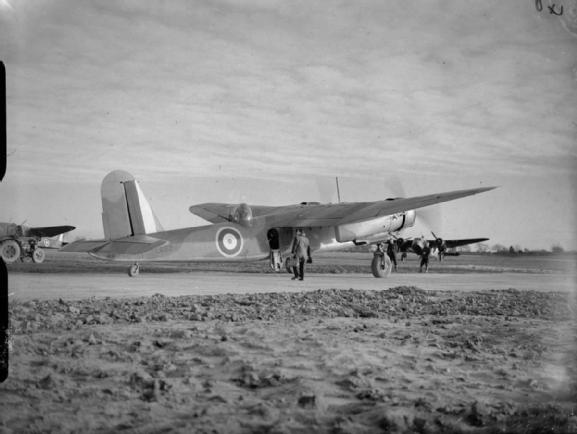 In 1942 Wing Commander Iles developed the 'Silloth Trainer', a forerunner to the modern flight simulator. It was presumably built around parts of a a Hudson fuselage and fitted up with electrics and pneumatics to simulate engine sound, instrument readings, and movement. Many US-built Hudsons had ended up in the Solway Firth (leading to the local nickname 'Hudson Bay') and one was presumably use to produce the trainer. No.1 OTU was replaced by No.6 OTU in 1943 and around that time 311 (Czech) Sqn aircrew arrived for training on anti-submarine missions with Liberator bombers.
No.5 OTU moved to Kinloss in 1945, leaving the base with only 1353TT flight (Spitfires) as a flying unit. In the summer 22MU began dismantling surplus aircraft and storing Dakotas and Yorks. Many Lancaster bombers, minus outer engines and wing sections, were waiting to be scrapped at the airfield. 1353TT flight left the base in 1946. Stored Yorks and Dakotas were returned to service in 1948 to serve in the Berlin airlift. More aircraft were scrapped from 1950: Ansons, Oxfords, Mosquitos and Yorks al came to 22MU. At the same time Lockheed Neptunes were being prepared for sale to foreign goverenments.
In 1955 22MU began dismantling aircraft that were left over from the Korean War. Manx Airlines experimented with an scheduled service to the airfield in 1956, using Bristol 170s.
In 1960 the airfields last military aircraft (a Dakota) took off and 22MU disbanded while the RAF put the airfield up for sale. 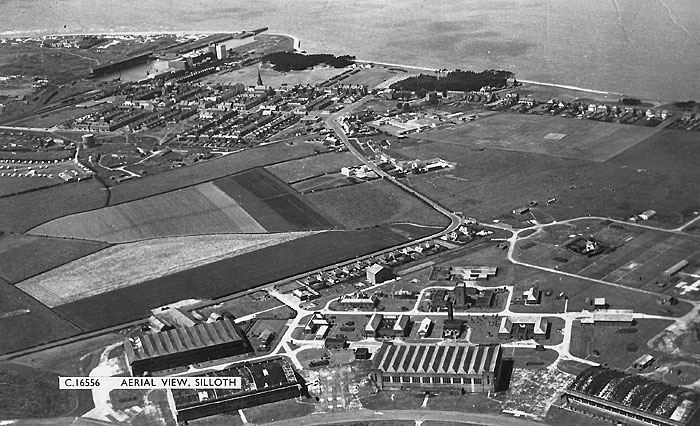 Silloth town and the airfield in the lower half of the photo, ca. 1950 (solwayplain.co.uk). 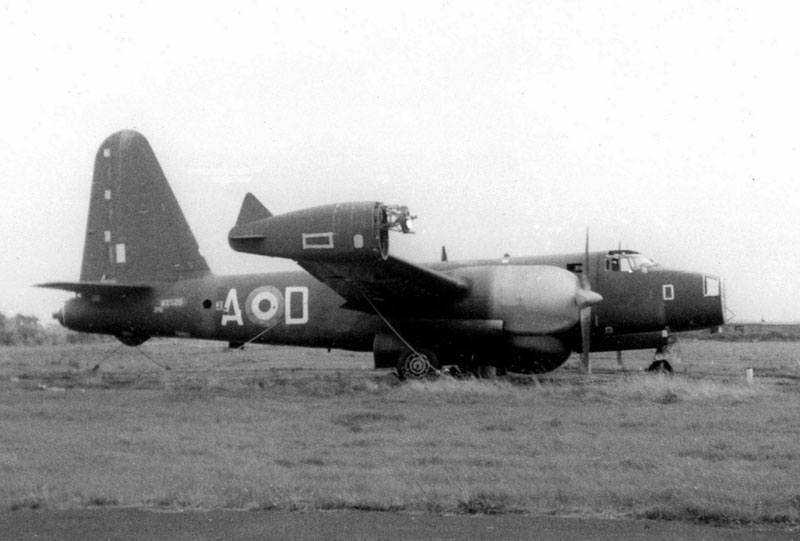 In 1962 the airfield was sold, in part to British Steel. They used the airfield for executive flights. The rest of the airfield was used for light industry. According to Russell W. Barnes, the airfield was used for an airshow as late as 1978. During the show a Hawker Sea-Fury had landed and taken off from the airfield. Since it has been used for a destruction-derby like event, and for driving lessons.
Much of the original airfield remains, including (major parts) of the runways and taxiways. Many buildings and hangars remain and in aerial photography dispersals are still easily recognisable. 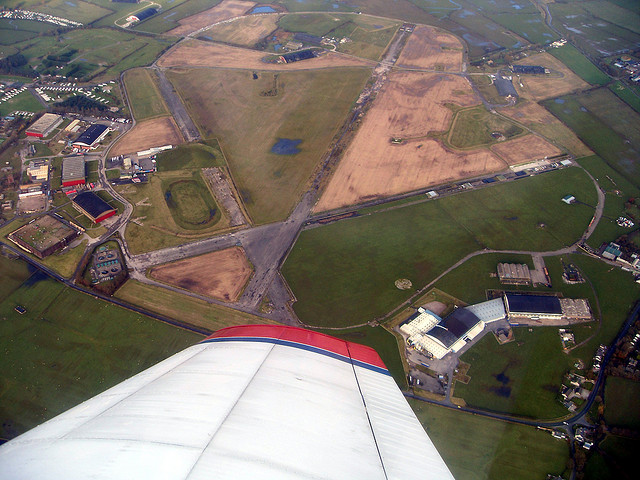 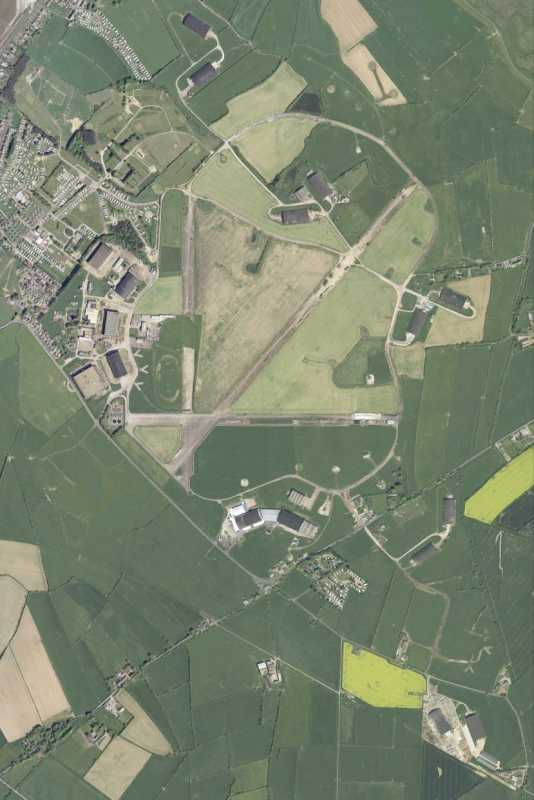 Overview of the complete complex at RAF Silloth (Google Earth). Notice the clearly visible but overgrown dispersal areas North and Southeast of the airfield. A third area is less visible Southwest of the airfield, and a fourth existed to the Northwest of the main hangar complex, but is now occupied by a trailerpark/camping site.