Soesterberg Air Base (ICAO: EHSB) was a Royal Netherlands Air Force military airbase located in Soest, 14 kilometres (8.7 mi) eastnortheast of Utrecht.
In 1910 two car dealers from The Hague decided to set up an airfield on a moor outside the village of Soesterberg. Soesterberg was established as an airfield in 1911, and in 1913 the Dutch Government bought the field and established the Army Aviation Branch (dutch: Luchtvaartafdeeling). The "Military Aviation Branch" eventually became the Koninklijke Luchtmacht (English: Royal Netherlands Air Force - RNLAF). It's first commander was a captain of the Engineer Corps: Henk Walaardt Sacré.
Throughout World War I Soesterberg served as the main airfield of the Luchtvaartafdeeling with several types of aircraft. Some were bought outright from their manufacturer, while others were interned when they diverted to Holland due to battle damage or other reasons.

Aerial photo of a Handley Page V/1500 at Soesterberg, in 1919 during the ELTA (Photo: collection Nederlands Instituut voor Militaire Historie).

After the war the airfield was slowly expanding. The Dutch government did not spend too much money on its air force however, until the second half of the 1930s. Recognising the threat of Germany in particular, it embarked on a modernisation programme. New fighters such as the Fokker D.XXI and G.1 were ordered, along with batches of Douglas DB-8a and Fokker T.5 bombers. All aircraft were delivered to Soesterberg to be sent to their units.

At the beginning of World War II the German force's blitzkrieg overran the country in five days, and Soesterberg was occupied by the German Luftwaffe on 15 May 1940. They built three hardened runways and a large dispersal area on the east side of the airfield.
A variety of German aircraft was stationed there during the war, initially flying missions during the Battle of Britain, and later to practice bombing missions on nearby ranges and provide fighter defence against Allied bombing missions.
From 1944 onwards, Allied Air Forces caused enormous damage to the airfield by bombing it relentlessly. By September 1944 the Luftwaffe acknowledged Soesterberg airfield to be more or less useless. Still, what had not been destroyed by Alllied raids the Germans managed to destroy in the final months of the war.

It took 6 years to rebuild the air base, which was finally declared operational in August 1951. The air base got an Air Defense tasking, and the first jet fighters of the Netherlands found their way to Soesterberg.


In 1954 the United States and the Netherlands signed a bilateral agreement that covered the stationing of a squadron of air defense fighters of the USAF. Against all US policy the squadron was to be placed under daily operational command of the Royal Netherlands Air Force.
As a result of the stationing, the airbase was expanded to the east to make use of the single German-built flattened marguerite-like dispersal area and a longer NATO standard runway.
The parkings in the dispersal aera went by three names: The area that later became the 334 Sqn platform was known as 'Near-East'. The semi-marguerite became 'Middle East', and the area to the extreme east became the 'Far East'.
The bilateral agreement only covered the stationing of one squadron. The squadron brought F-86 Sabres of the 512 FIS with them, but 512FIS was soon redesignated 32 Fighter Day Squadron.
After only one year after their arrival, they traded in their F-86 Sabres for F-100 Super Sabres and were redesinated 32 Fighter quadron, with the squadron enlarged to 24 aircraft. In 1960 the 'Huns' were replaced with F-102 Delta Daggers, redesignating the squadron to 32 Fighter Interceptor Squadron. In 1968 it became 32 Tactical Fighter Squadron with the arrival of the F-4E Phantom-II.  The F-4s were relieved by 4 models (A,B,C and D) of the F-15 Eagle, which remained in service until the unit was disbanded in 1994.

airfield spectators at Soesterberg, watching from the Van Weerden-Poelmanweg, just north of the "Middle East" dispersal area in 1956.

Vertical aerial photo of the three Soesterberg runways after the lengthening of the 09/27 runway, rotated by me to show the north side up
(Photo: RNL Navy collection collection Nederlands Instituut voor Militaire Historie).

Skyblazers F-100s at Soesterberg (notice the 32FIS lettering on the bumper of the truck), early 1960s (photo by Bill Snell, via Mario Warnaar).

Birds eye view of Soesterberg Air Base, after lengthening the main 09/27 runway, which occurred somewhere in the late 1950s. On the west side of the field the old third runway is just visible.


Introduction to the 32TFS in the 1970s, when 32 TFS still operated the F-4E Phantom-II. Note that in the refuelling part of the video, Phantoms are in some shots refuelling from KC-97Ls!  (34:30min)

An RAF Alconbury based F-5E agressor lifts off from runway 27 at the intersection with 13/31 in 1981 (unknown photographer, collection Hermen Goud/Facebook)

Soesterberg Air Base on a 1987 Soviet military map. While the map may seem remarkable, it is important to know that during the Cold War, Soviet (and other Warsaw Pact) airlines were not as limited in their movements in European airspace as western aircraft were in Eastern Europe. Still, the map does contain errors, some of them very obvious. For instance: the railway line west of the airbase (thick black line) did not exist since 1972. At the point where it crosses the A-28 highway a bridge was built, which for years was rumoured to contain the DPO/NATO fuel line to Soesterberg. Although technically possible (it is hollow), it did not (in Dutch). A bridge one kilometer to the east, much wider than required and partially covered by a green berm contains the NATO pipeline (atlassen.info)

'The 32nd', as they were known for short by the Dutch, or 'the Queens Own' as they called themselves, deserved a very good reputation within NATO and the Netherlands. In 1959, the 32d received the signature "Royal", the crown and wreath of the Dutch Royal Family (the House of Orange) were added to the emblem, giving it its unique look.  This unique honour was granted in recognition of the unit's contribution to the defence of the Netherlands, and graphically illustrates the 32d's close ties with the Royal Netherlands Air Force. 32TFS had the unique distinction of being the only unit in the USAF whose emblem included the royal crest of another nation. This addition was only authorised as long as 32TFS remained in the Netherlands. The stand down ceremony of 32FW/32FS on 19 April 1994 was held in the presence of members of the house of Orange. 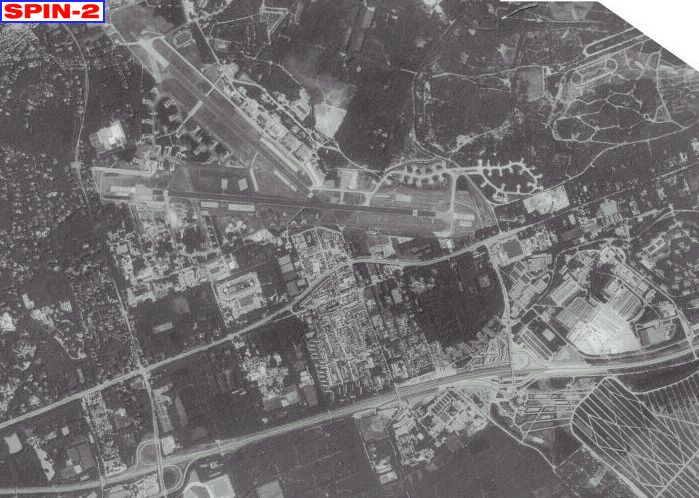 Nearing the end of their careers in the early 1990s, many of the F.27s were painted white for UN missions, like this example at Soesterberg (Photo: collection Nederlands Instituut voor Militaire Historie).

The final three F-15s (two F-15A MSIPs and a single F-15B MSIP) at Soesterberg left the airfield for the USA on 13 january 1994. They can be seen taxying to the runway. After take off the three did a formation flight over the airfield accompanied by RNLAF F-16s as a farewell to their home for 40 years. 32FS officially stood down 3 months later. (photo RonaldV).

The first Cougar-II to arrive at is new home plate at Soesterberg in 1996 (Photo: collection Nederlands Instituut voor Militaire Historie).

In addition to the Americans (who called Soesterberg 'Camp New Amsterdam' in honour of the first Dutch settlers in 'New Amsterdam', present day New York) the Royal Netherlands Air Force had continued to use Soesterberg. They based jets, helicopters and transport aircraft at the air base. Their jets left in the 1960s and the transport aircraft left in the early 1990s.
Finally in late 2008, after all the helicopter units had moved to Gilze-Rijen, a final ceremony was held to close the air base for good. The last jet aircraft to leave the base was a Greek F-4E Phantom, and the base formally closed on 31 December. Upon its closure in 2008 Soesterberg was the oldest active airfield in the Netherlands, and one of the oldest in the world. For much of its history (almost 40 years) the air base was linked to the United States Air Force, holding a front line squadron of jet fighters at the base.

One of the tabvees when the airbase was still active (2006-2007?) (SlobberinWolfhounds.com).

Part of the base is still in use as a glider field. The rest of the airfield is under conversion: part (the 'American side') will be restored as a nature preserve, although some HASes will remain, another part (the 'Dutch side' with the Group Helicopters hangars) will become the new Netherlands Defense Museum. Runway 09/27 will remain, to remind the people of the old air base.

Soesterberg, around 2006. Clearly visible is the original NATO semi-marguerite dispersal on the east side of the airfield. Somewhere between 1990 and this photo Soesterberg lost the use of runway 13/31 The outline of the old third runway can also still be seen, it ran from the end of runway 13 over the 09/27 into the later 32FG dispersal area (Bing maps).

view of the hangar area in March 2011

The former information office at the visitor platform in March 2011 with Soesterberg's tired and rusty aircraft stairs which surely should've deserved better (RonaldV).

Soesterberg tower as seen from the visitors platform, March 2011 (RonaldV.nl).

Undated photo of a tabvee being demolished (photo via Mario Warnaar)


August 2013 - in an Alouette III (a well known sound over the airbase once...) over former 'Home Plate' Soesterberg, while construction of the National Military Museum was underway

Photo taken from a glider on 29 Aug 2015, showing the main runway of Soesterberg. Although Dutch newspapers reported (in Dutch) that the main runway would remain, it seems dismantling of the runway is instead taking place: the concrete of the western runover (some 350m) has been removed (photo: Andras Brandligt, AfterburnerPhotography).

Photo taken on 29 Aug 2015, showing the new Defence museum where there was previously a row of RNLAF hangars. Runway 13/31 has almost completely disappeared, as have most of the taxitracks and the visitor platform (photo: Andras Brandligt, AfterburnerPhotography).

View from the ground in July 2017: the taxitrack towards 09 was completely removed (RonaldV)

The hangar area was completely removed to make room for the National Military Museum, which incorporates the collection of the former Military Aviation Museum that used to be located at nearby Kamp van Zeist. It is seen here in July 2017 (RonaldV)

Monument for fallen comrades, cleaned up and relandscaped in July 2017 (RonaldV.nl).