St. David's air field (RAF St. David's) was an airfield 350 kilometers west of London.
The airfield was (along with nearby RAF Brawdy) built as one of the last air stations in the west of Wales. RAF St. David's opened in the autumn of 1943 as a Coastal Command airfield. It had the classic wartime three-runway layout along with a control tower and three T-2 hangars. It was orginially intended to operate US Navy Liberator bombers, but a change of plan led to RAF squadrons moving in.
Initially detachments of 206 and 220 Sqns Fortress four-engined bombers used RAF St David's. They were succeeded by two squadrons of Halifax bombers - the heavy four-engine type would call St David's 'home' for several months. 58 and 502 sqns moved to RAF St David's in December 1943 and carried out intensive patrols during the winter and spring. They were soon joined by 517 Sqn, operating Halifaxes in the meteorological role, but this led to overcrowding and the new squadron moved to Brawdy in February, 1944.
At St. David's satellite airfield Brawdy, the runways were better aligned with the prevailing westerly winds. So, in certain wind and weather conditions, Halifaxes from St David's -fully bombed up, but with a light fuel load- would make the short 'hop' to Brawdy. There, the heavily laden bombers would be 'topped up' with fuel before taking off into the prevailing wind.

RAF St. David's around the time it was completed in 1943 (Wikimedia)

The long patrols over the ocean wastes were mostly uneventful, but occasionally there was intense action -against U-Boats or surface vessels. Also, there was always the chance of encountering marauding German fighters.
In February, 1944, a Halifax returning to St. David's was shot down by German intruders off the Pembrokeshire coast, only a wheel was found. In the dangerous skies over the Western Approaches seven St. David's-based Halifaxes were lost on operations between January and September 1944. Other Halifaxes were written off in crashes or accidents on or near the airfield.
In September 1944 the two squadrons moved to other bases. In the last months of the war a detachment of 220 Sqn's Liberators was stationed at St. David's for a time. 220 Sqn was followed by the last operational squadron, 53 Sqn, also with Liberators. 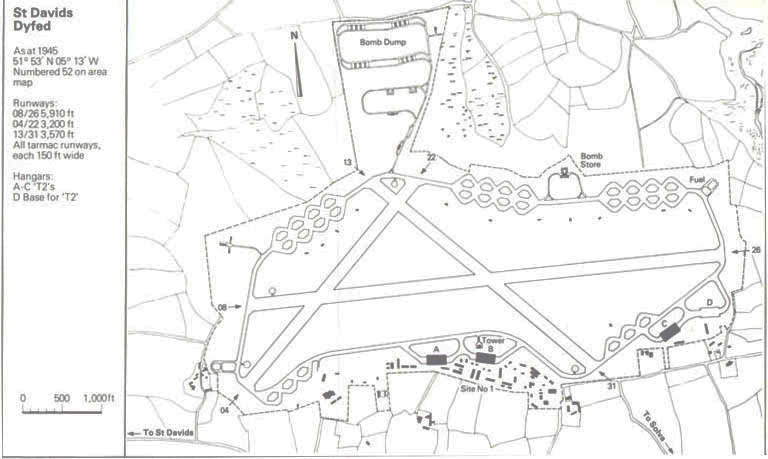 Site plan for the air station in 1945 (Photobucket).

After the European war ended, 53 Sqn lost a Liberator and its four-man crew in a crash. On 1 November 1945, the airfield went into Care & Maintenance, but unlike most of the other Pembrokeshire airfields, St David's had a flying role in the post-war years, albeit not under RAF control. As of 1 January 1946, the airfield became a Naval Air Station, but with a RAF relief function.
From 1950 Airworks Ltd provided aircraft (Sea Hornets, Sea Mosquitos) and aircrew for the flying aspect of the training as the ADTU (Air Direction Training Unit) from RNAS Brawdy, before moving to RNAS St. David's. At St. David's they gained jets (such as Meteor T.7s, Sea Venoms, Vampires) before moving back to Brawdy in 1958.
When the RAF operated its Tactical Weapons Unit at RAF Brawdy (1974 - 1992) one of the runways at St David's was kept in use as a relief landing area. Air Cadets had summer air experience flights from the airfield. .

Most of the wartime buildings are long gone, a recent survey revealed that only 11 structures remain out of an original 470. A small cluster of buildings are now used for agricultural purposes and the former wireless telegraphy station is now a workshop. A brick-built blast shelter and a few huts survive also.

Overview of the airfield in 2009 (Google Earth)


Late in August 2014, Mark Murphy shot this video of St. Davids airfield with a remote controlled quadcopter and offered it for use on the site. How can anyone turn off such an offer?