The Thionville-Yutz airfield made its appearance in the Bulletin de la Navigation Aérienne from its first number, published in May 1920, on the list of "military aviation centers with a landing field on which aircraft from Commercial Aeronautics could land ". 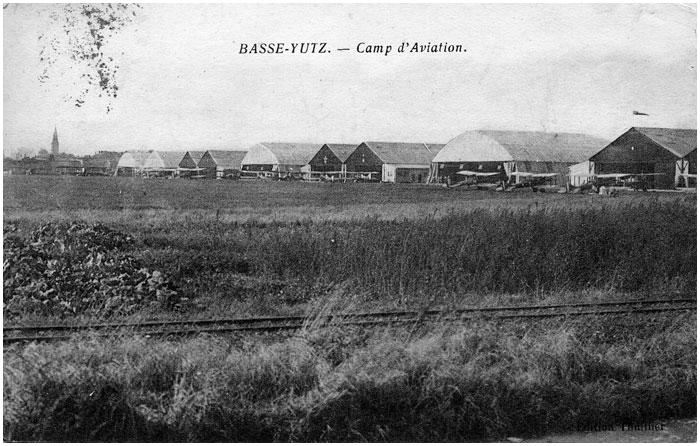 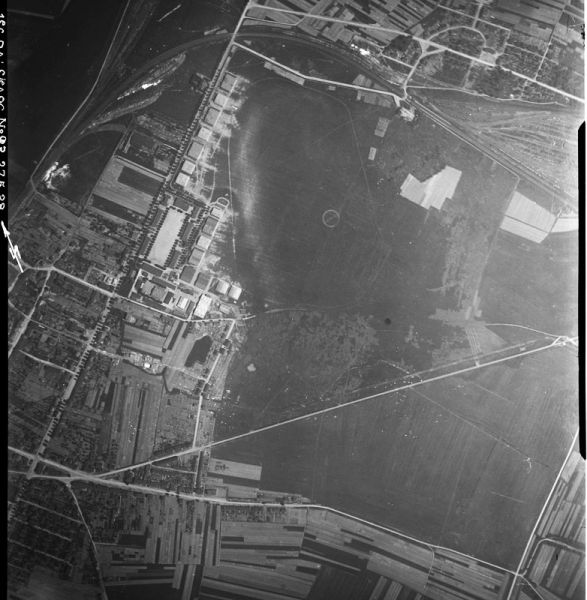 Although it retained its sole military destination throughout the interwar period, in April 1925 it was the subject of a descriptive sheet with a plan equivalent to aeronautical instruction.

The dimensions of the landing area then indicated remained those of 690 mx 660 m announced when it opened to civil flights and will remain unchanged until 1933. They will then be increased to 900 mx 900 m and will be kept as they are until June 1940. 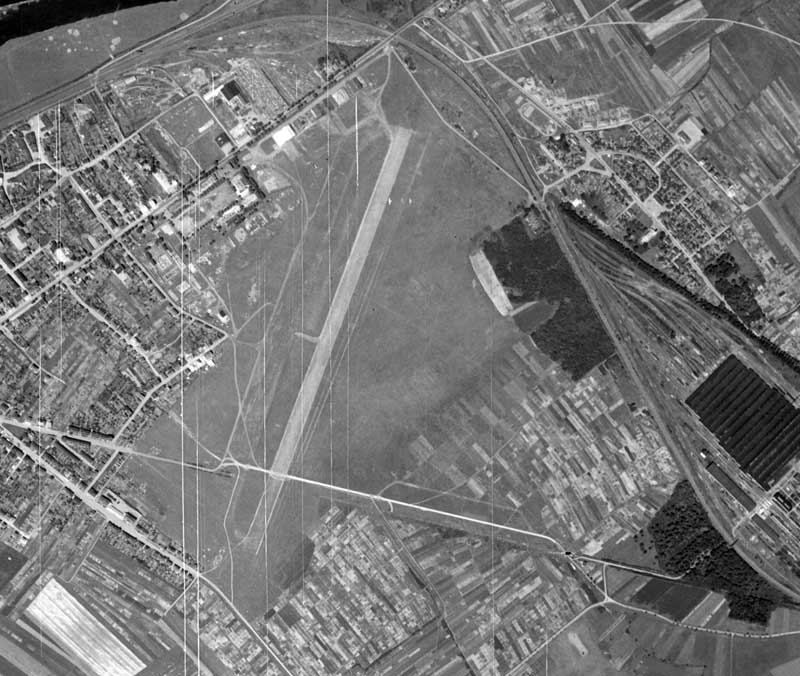 Thionville in 1950, when the airfield looked much like the World War II Air Depot built by the Americans. Notice that the town to the west is still fairly far from the airfield. Also notice the position of the runway relative to other locations/buildings in town. The white vertical lines were caused by damaged film (IGN, via Géoportail).
According to several french web pages the airfield was used by the french military for a few years, until military aircraft became to heavy to use its grass airstrip. The airfield then became a civilian airfield, although it was still owned by the French state. Over the years, the city crept in closer and closer to the airfield, forcing it to slowly move eastward. 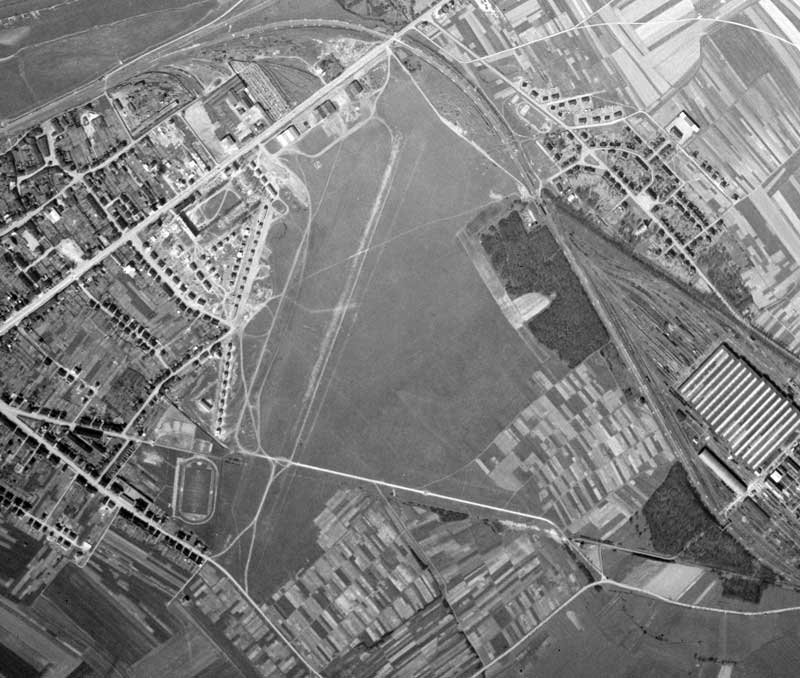 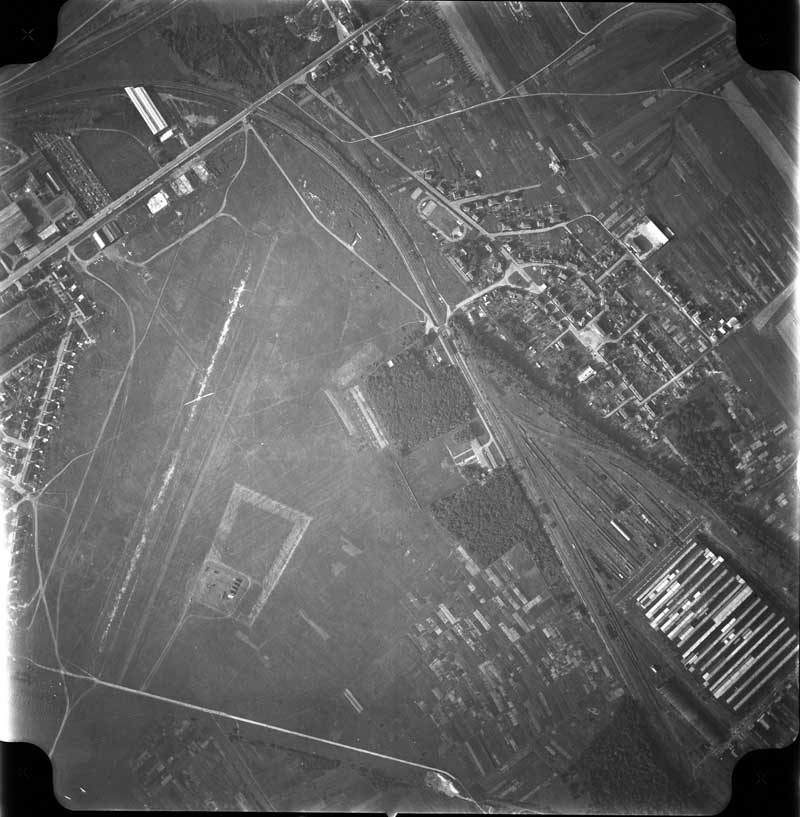 Thionville, September 1960. Only a single Air Depot hangar is still standing, although the foundations of the others are still recognisable. The purpose of the squared off area east of the runway is not clear (IGN, via Géoportail). Thionville 12 August 1966. A lot can happen in 6 years. Compared to the previous photo, the runway has been moved east, and a completely new street with homes has appeared right on top of the former runway. If you do not believe me: Look at the 1955 photo, which was taken from slightly higher, showing more of the surroundings. The sportsfield gives a good idea, as does the location of the old Air Depot (IGN, via Géoportail). 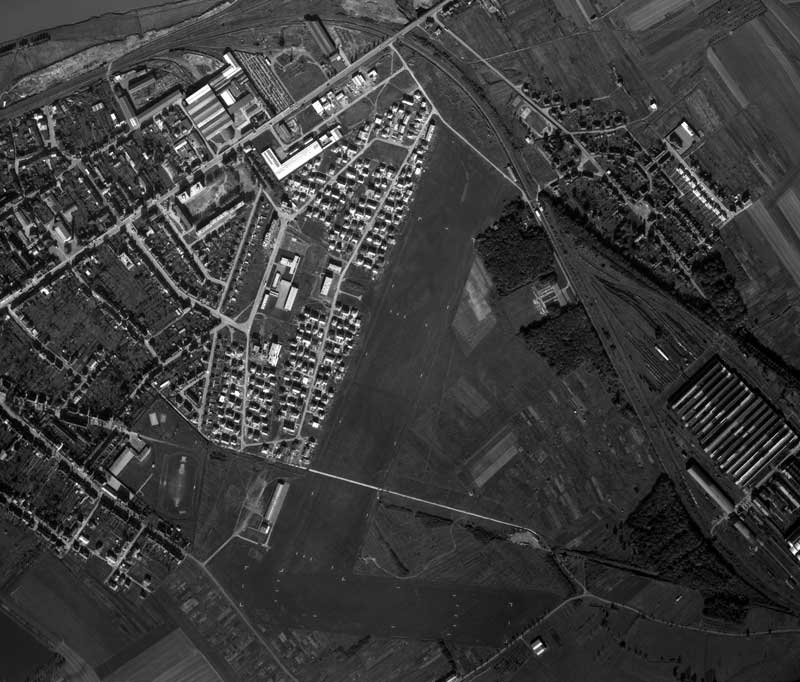 Thionville, 19 Oct 1967. Since the previous photo, runway markers were added, now making it clear that the airfield has two runways (IGN, via Géoportail) 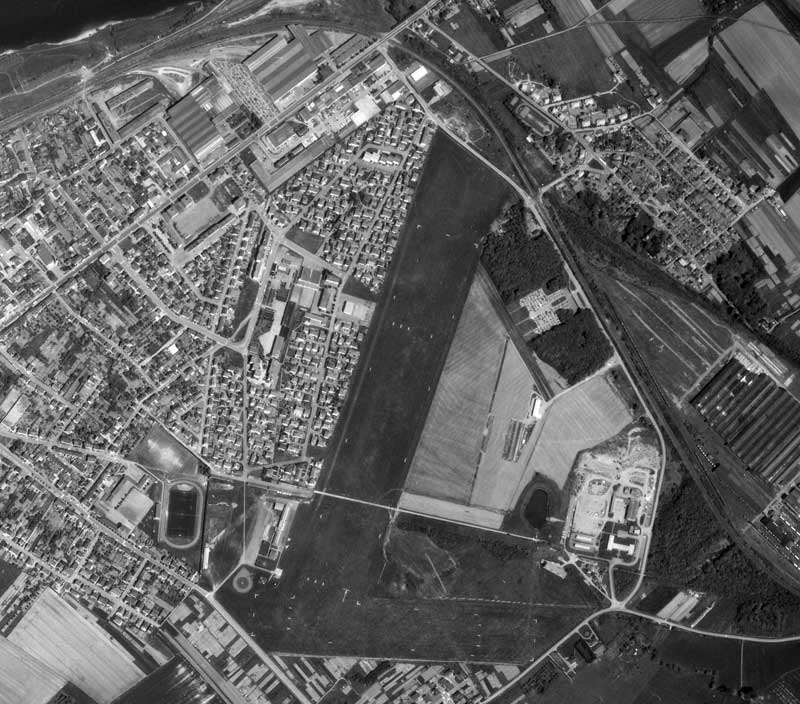 In this May 1982 photo Thionville still had the same layout, but a small parallel runway was added to the east of the main 02/20 runway (IGN, via Géoportail)
In 2007 the airfield was transferred from the state to the city council. Almost immediately plans were announced to close the airfield and 'develop' it into a commercial zone. The airfield, by now located alomost within the city limits, was considered to be 'dangerous' by the same city that during the previous decades had continued to build closer and closer to it. In early June 2011 the French Ministry for Ecology, Sustainable Development, Transport and Housing published a decree efectively closing the airfield immediately, after having been in operation for 65 years. At the same time the airfield was struck off the list of primary airfields in France. 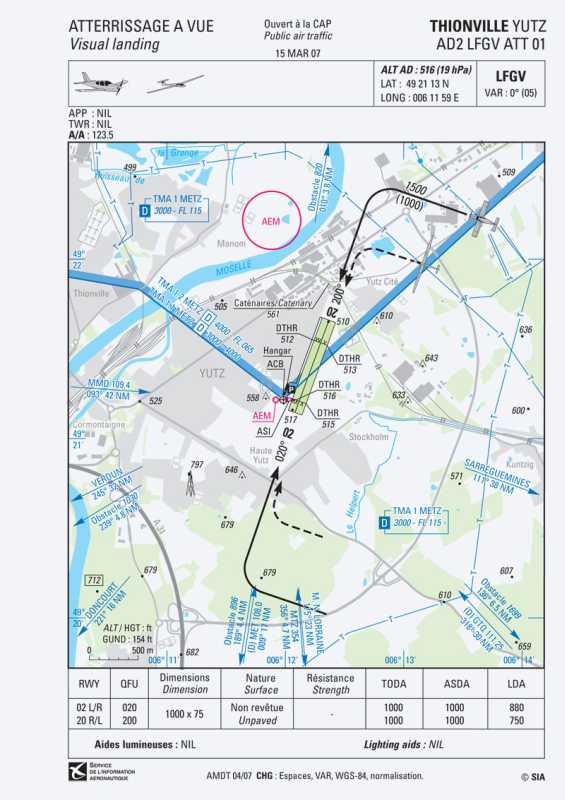 Thionville Approach map showing the airfield had lost the use of its east-west runway by 2007
The local flying club was not surprised. Whenever they negotiated their interest they were met with a stern 'non!' by local officials. Although a plan to start building an 'eco neighbourhood' began to take effect immediately, the flying community went to court. Almost a year after the decision to close the airfield was taken, the court decided in favor of its users. New laws, introduced in 2010 stipulated that users of the airfield should have been consulted in order to offer them a relocation solution. Although the users had been contacted, they were contacted after the airfield was closed, and not - as the law stipulated- in advance. The small victory meant that the airfield had to be reopened. That proved fairly hard, as the land had already been partially dug up. All work was suspended from 4 June 2012.
On 24 August 2012 the airfield was reopened. It had a major drawback however: Because work on the airfield had already begun, parts of the old runways had become unusable. This meant that only a single runway was reopened, effectively shortened to less than half its former length. Shortly after, the airfield was definitively closed by the French Government in February 2013. 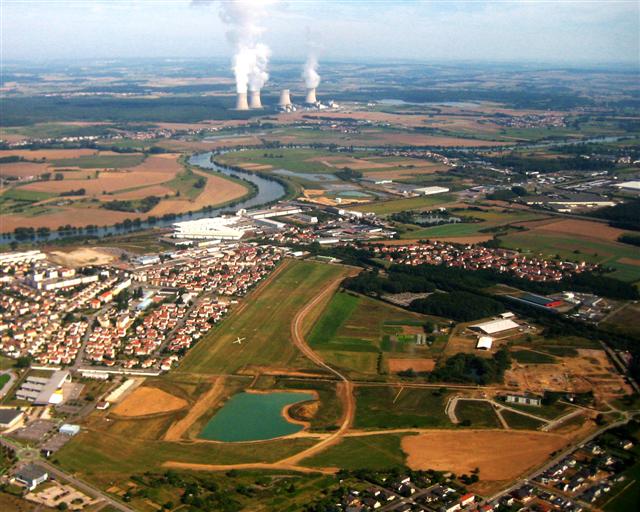 Overview of the airfield on 2 Sep 2012. Clearly the much shortened runway can be made out, as well as the works that caused the shortening. The cut off area is marked with a single large X in the grass (pilotes-prives.fr).
contact us about this airfield