48°41'53"N 005°55'02"E
runway: 09/27 - 5000x120ft - PSP
Air field Toul-Croix De Metz (french: Aérodrome Toul-Croix de Metz, also known as Gengault Aérodrome or Advanced Landing Ground A-90 'Toul-Croix De Metz') was an airfield just outside Toul, 160miles east of Paris, France.
The airfield was built about 1916 by the French Air Force as a combat airfield during World War I. It is not known which French units used the airfield in the early years, but it is known to have included airships. In 1918 it was turned over to the American Expeditionary Force. 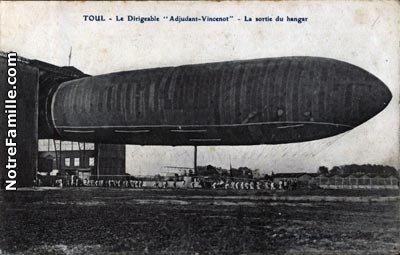 Postcard of airship 'Adjudant Vincenot' leaving its hangar at Toul during World War I (source)
When the Aero Squadrons of the AEF initially deployed to France they were dispersed among various army organisations. This severely hindered coordination, so in order to achieve better coordination the Aero Squadrons were organised into Pursuit Groups.
Units based at Toul were:
1st Aero Squadron, 22 August-21 September 1918.
Photographic Section No. 1, 24 August-19 September 1918.
8th Aero Squadron, 29 September-23 October 1918.
12th Aero Squadron, 22 August-20 September 1918.
13th Aero Squadron, 23 June-23 September 1918.
17th Aero Squadron, 4 November-12 December 1918.
22d Aero Squadron, 16 August-22 September; and again from 30 September 1918-10 February 1919.
25th Aero Squadron, 24 October-15 April 1919.
27th Aero Squadron, 1-28 June 1918.
49th Aero Squadron, 2 August-23 September 1918.
94th Aero Squadron, 7 April-30 June 1918.
95th Aero Squadron, 4 May-25 June 1918.
103d Aero Squadron, 4 July-7 August 1918.
Other units were at some time assigned to Toul as well, but they remain unidentified. The units were assigned with tasks as reconnaissance sorties, protected observation aircraft, attacking enemy observation balloons and strafing enemy troops. In addition, they were flying counter-air patrols, and bombing towns, bridges, and railroad stations behind enemy lines. Some of the most illustrious names in early American Army aviation were assigned to Toul during World War I. They included Eddie Rickenbacker, Quentin Roosevelt, Frank Luke, Carl Spaatz, Billy Mitchell and others.
After the Amistice on 11 November 1918 the Americans at Toul demobillized and left France, the last ones in early 1919.
French Air Regiments used the base in the 1920s when the wartime grass field became a permanent base with the associated infrastructure such as hangars and barracks. When World War II broke out in September 1939 the 35th Aero Regiment was assigned to the airfield, equipped with obsolete Curtiss Hawk Model 75s. Its 7th squadron was the descendant of the Lafayette Escadrille of World War I fame, "Groupe de Chasse II/5, the Escadron Lafayette". In 1940 Polish pilots of the Montpellier Group, having escaped from invaded Poland, formed part of Groupe de Chasse III/1, flying obsolete Morane fighters. In spite of being obsolete, surviving accounts of the squadron during the Battle of France the Hawk-equipped Regiment claimed 230 confirmed and 80 probable victories in Hawk 75s.
The numbers came against only 29 aircraft lost in aerial combat.
The German 'Blitzkrieg' overwhelmed the French and the British Expeditionary Force however. The unit surrendered to the Germans along with the French Armed Forces at the Second Armistice at Compiègne on 22 June 1940. 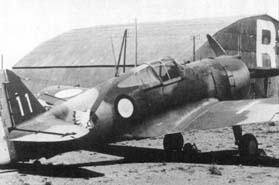 Curtiss Hawk 75 of Lafayette Escadrille at Toul. Notice the indian head on the rear fuselage.
The airfield was taken over by the Luftwaffe, who used the airfield as a training ground for ground support units. It was used from September 1942 until February 1944 by Zerstörerschule 2 (Fighter bomber school 2) as a training facility for Messerschmidt Bf110s. Toul became an operational airfield when Kampfgeschwader 53 (KG 53) arrived at the airfield with Heinkel He-111 medium bombers in July 1944. The He-111s were modified to be used as carrier aircraft for launching V-1 Flying Bombs, aimed at targets in Britain.
Toul-Croix De Metz was attacked by USAAF Eighth Air Force B-17 Flying Fortress heavy bombers to attempt to stop these V-1 attacks. KG53 withdrew from the airfield at the end of August, ahead of the advancing American Third Army which was moving into the area.
IX Engineer Command moved the 826th Engineer Aviation Battalion to Toul airfield on 14 September 1944. It was still relatively intact and 826th EAB began clearing the airport of mines and destroyed Luftwaffe aircraft. Toul's operational facilities were then repaired for use by American aircraft. It was turned over to USAAF Ninth Air Force for use as a combat airfield, designated Advanced Landing Ground "A-90" Toul-Croix De Metz.
Under American control, Toul-Croix De Metz was initially used as a resupply and causality evacuation (S&E) airfield. C-47 Skytrain transports used the airfield frequently, carrying in supplies and moving wounded personnel to hospitals in the rear area. In October, the 862d EAB moved in and laid down a 5000feet Pierced Steel Planking all-weather runway. They also repaired the barracks and other facilities at the base, so it could be used though the winter months. In November, the 358th Fighter Group moved in with P-47 Thunderbolts and flew operational missions from the base until the beginning of April 1945. The airfield was closed and returned to French control after the war on 30 October 1945.

P-47D Thunderbolt (s/n 44-33240) of the 358th Fighter Group, Toul-Croix de Metz, France, in January 1945 (United States Army Air Forces via National Archives, via Wikipedia).
In French control after the war, the airfield was closed and left unused for years. The growing urban area of Toul and the need for other (more pressing) reconstruction after the war, led the Air Ministry to sell off the property to private interests, instead of rebuilding it as a military airfield. A major consideration was that the airfield was physically small and the cost to purchase additional land to build a jet runway and other facilities were deemed too high. Another factor was the prospect of jet fighter aircraft taking off and landing over the urbanized area around the airfield, which was highly undesirable. In 1950, NATO was looking to locate an American Air Force fighter airfield in the area.
Given the historical American association with Toul, an airfield in the region was selected for American use. But instead of Toul-Croix de Metz, the World War II airfield at Rosieres-en-Haye was made available. 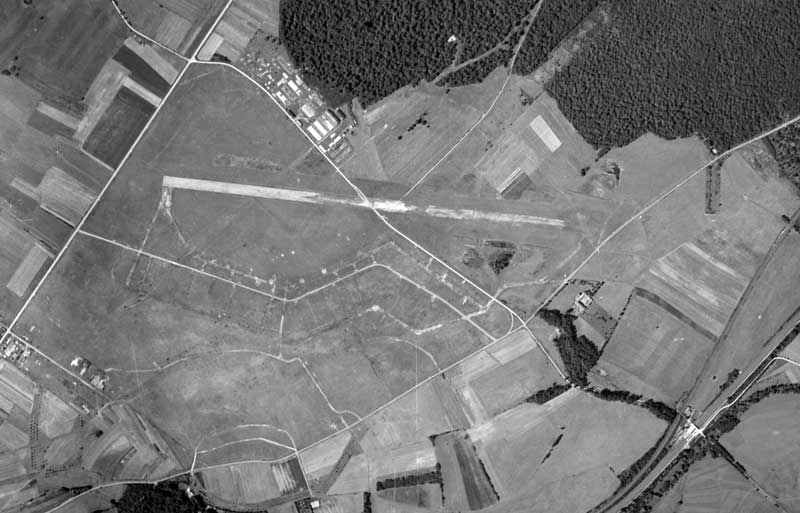 Toul-Croix-de-Metz in August 1950. Although the airfield was abandoned in 1945, the runway and dispersals can still be recognised. A year after this photo was taken, construction of a large US Army depot began at the site (IGN.fr).
On 26 September 1951, US Army Engineer Depot Toul was activated under command of Lt Colonel H. Dejarnette, III, then Commanding Officer of 552nd Engineer Service Battalion. There was little evidence that the site was once an airfield, used during both World Wars. Two platoons, the third platoon of the 83rd Engineer Depot Company and the first platoon of the 420th Engineer Field Maintenance Company, were given the task of clearing the area. At the time of activation, facilities consisted of only 15 buildings. In the second half of 1951, contracts were given to French construction firms for the construction of warehouses, rail spurs, permanent roads, storage areas and administrative buildings to make the US Army General Depot, Toul, a thriving military establishment. Storage facilities were far from adequate and there was insufficient trained personnel to handle the supplies as they arrived from November 1951. As soon as they arrived, the 83rd Engineer Depot Company and 420th Engineer Field Maintenance Company established a tent city and construction of covered working space, storage pads, and roads followed soon after. Again, lack of trained personnel hampered early construction efforts.
Until May 1952, life and work at the depot was hard and long. The first phase of construction of troop housing and rail spurs was not completed while more and more units arrived for integration into the mission of the Depot. By December 1952, the US Army Engineer Depot Toul, was changed from a Class II installation to a Class I installation.

In the initial plans for the US Army Engineer Depot, Toul was considered to become a relatively inactive type depot, since the supplies to be stored were to be primarily reserve stocks. In 1955 however, plans were changed and the depot was to become the primary engineer issue depot for all of France and Germany. These plans were again revised in 1956, giving the depot a distribution mission for France only. On 19 June 1959, the Toul Depot was redesignated as a General Depot with an Ordnance as well as an Engineer Supply Mission. On 1 May 1960, the depot was consolidated with the US Army General Depot, Nancy. On 1 November 1961, Toul Post was deactivated and Post responsibilities transferred to Nancy General Depot. 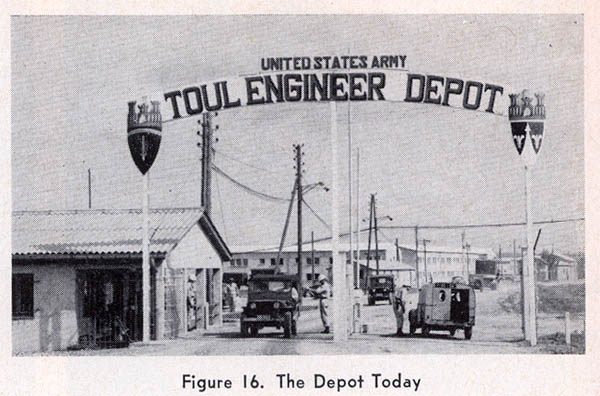 Main gate to Toul Engineer Depot, 1955 (The Military Engineer, Nov-Dec 1955, via USARMYEurope.com)
Today in aerial photography, the runway and small portions of taxiways can still be recognised, now reused as streets. The former depot is now in use as a commercial area. 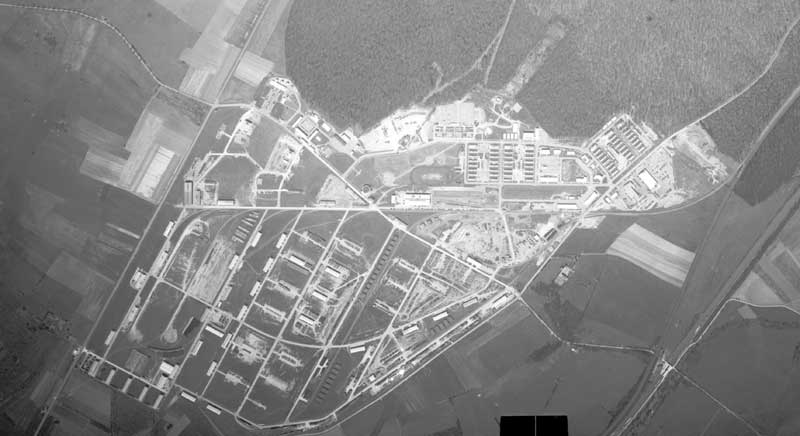 Toul-Croix de Metz in May 1958. Within a few years, the airfield was converted into a US Army Deport (IGN.fr). 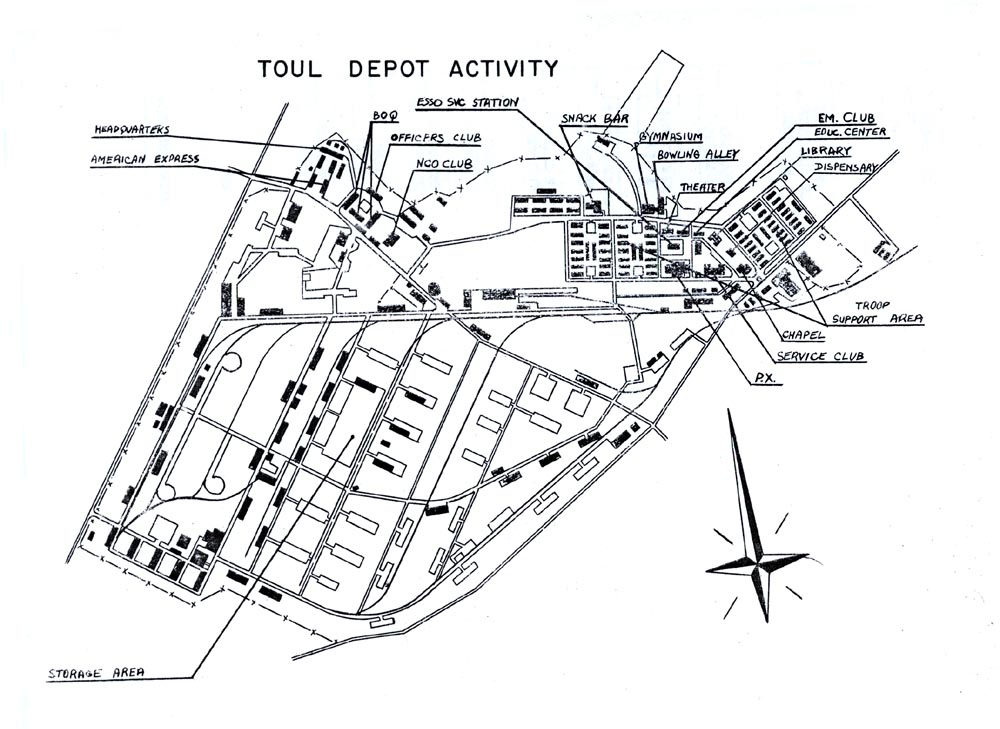 Overview of the depot ca. 1960 (USArmyEurope.com) 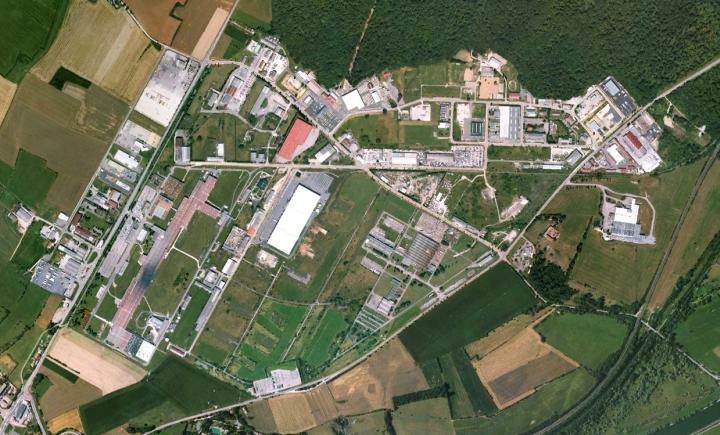 Toul-Croix de Metz, France, 2004. Inspite of the airfield having been closed almost 60 years ago, the runway can still be recognised (Google Earth).
contact us about this airfield