Travemünde airfield (german: Flugplatz Travemünde, also known as Lübeck-Travemünde, Travemünde-Priwall, Erprobungsstelle See, E-Stelle See or Seefliegerhorst Travemünde) was an airfield 70 kilometers northeast of Hamburg.
Its exact date of orgin is hard to determine.
At the beginning of the 20th century Zeppelins (airships) were reportedly starting and landing at the location, known as the Priwall.
The first aviation plant (Flugzeugwerft Lübeck-Travemünde GmbH) began building and testing floatplanes in 1914.
The first flight on Priwall was on 5 Jun 1914 by a Etrich-Rumpler "Taube".
This is why 1914 is generally considered the beginning of aviation at the airfield.
That same year airfield 'Travemünde-Priwall' was cleared for civilian air traffic.
When the original owner died, the aviation plant was sold to Fokker in August 1917 and in September 1918 the plant was sold to Caspar-Werke.
Since aircraft production was forbidden under the Versailles treaty, it officially produced furniture and household appliances.
However, secretly it manufactured aircraft parts, to be assembled in Sweden.
One of the designers was Ernst Heinkel, who designed aircraft for use from submarines.
He sold them to the USA and Japan, the very Allied powers that officially insisted on a ban of aircraft production.
In 1922, Heinkel left the Caspar-Werke and established his own company in Warnemünde.
The Caspar-Werke were sold off to the German Navy in 1926, by which time seaplanes had already been evaluated in Lübeck.
Priwall became a State airfield (german: Reichsflughafen) in April 1926.
With maintenance facilities and pan-European connections it also provided the public with a return flight to Berlin, Hamburg and Copenhagen.
Flights were made by Luft Hansa, both with flying boats and land-based aircraft.
Growth was considerable, so Priwall needed to be expanded and rebuilt in 1927.
Priwall was chosen for an expansion over Hamburg and Kiel-Holtenau and funds were provided by the Hamburg Senate, City of Lübeck and the national government for the sum of 300,000 Mark each.
During the rebuild, which lasted until November 1927, Lübeck-Blankensee served as an alternate airfield.

The Caspar-Werke AG aircraft plant, which started as a Fokker plant and became the Seeflug-Erprobungsstelle in 1928 (photo via forosegundaguerra.com) 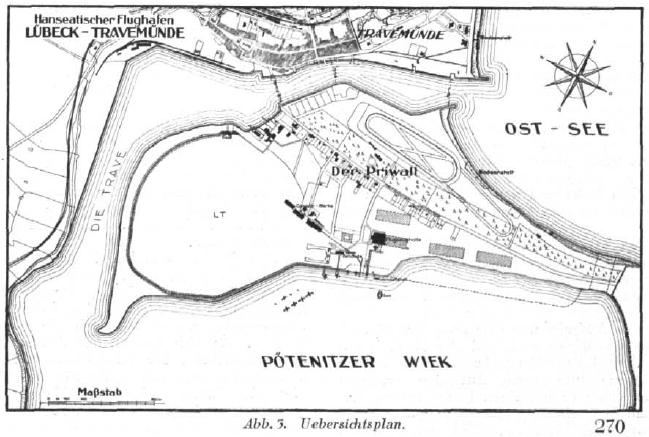 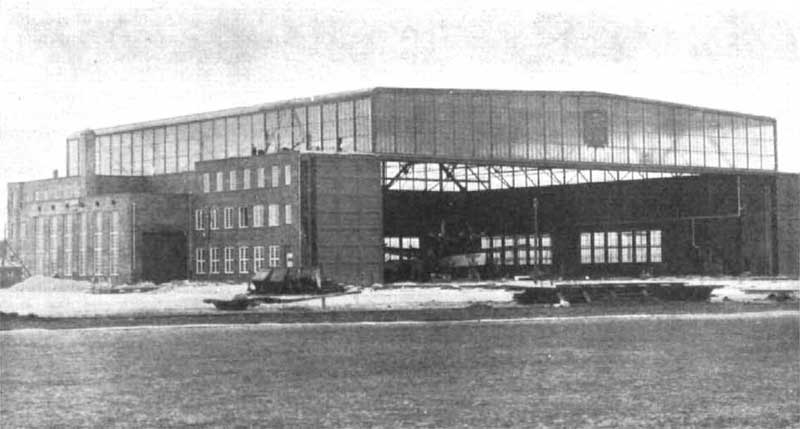 1928 photo of Travemünde (top) and the airfield, taken from 4,000 meters altitude (photo via forosegundaguerra.com)

After the rebuild, Priwall was designated 'Reichsüberseehafen', State Overseas Port.
Its new hangar could house 4 large and 3 small aircraft, the offices housed the airport administration on the east side and the Rohrbach aircraft works were located on the west side.
An asphalt apron covered the area between hangar and water.
Floatplanes were used to fly to Kopenhagen, as land aircraft were deemed too risky to fly overe large stretches of water.
To make full economic use of the 'Reichsübersee-Flughafen', the HanseatischeFlughafengesellschaft (Hansaic Airport Company) was founded in 1927.
By 1928 it already handled 1053 landings with mail, freight and passengers.
The Rohrbach-Metallflugzeug company built a construction shed in 1928.
The Deutsche-Lufthansa set up their regional headquarters and the airfield became the airtraffic roundabout of the North.
In 1929, 16 year old Trui Elisabeth Oving from Travemünde, wrote an excellent paper on the airfield.
The paper (in German) gives an excellent idea of the airfield in pre-nazi Germany.
To follow the great successes of the Lübeck aviation industry, the "German aerospace industry," set up a test site that has largely shaped the airport for the future.
In 1930 and 1931, airshows took place, the latter included a visit by The German airship LZ127 'Graf Zeppelin'.
The Great Depression prevented any further airshows.
Between 22 and 26 June 1932, the Do X made a number of sightseeing flights as part of its Germany tour.
A floating dock, dimensioned to hold the Do X (40 x 25 m, could be submerged to 3.5 m, with a capacity above 100 tons) was available as well.
The airfield and the test site, or 'Erprobungsstelle (E-Stelle)' in German, were taken over by the German 'Reich' in 1933
They added a military branch and a Aeronautics Agency (German: Luftzeugamt).
Civil aviation was banned from the airfield in 1935.
The 1927 terminal served as meteorological office.
Eventually, the airfield grew to employ some 1500 persons at the Erprobungsstelle.
A recovery ship "Greif" was added in 1937.
The peninsula became a military restricted area.
In spite of that public days were held throughout the 1930s until the outbreak of World War II 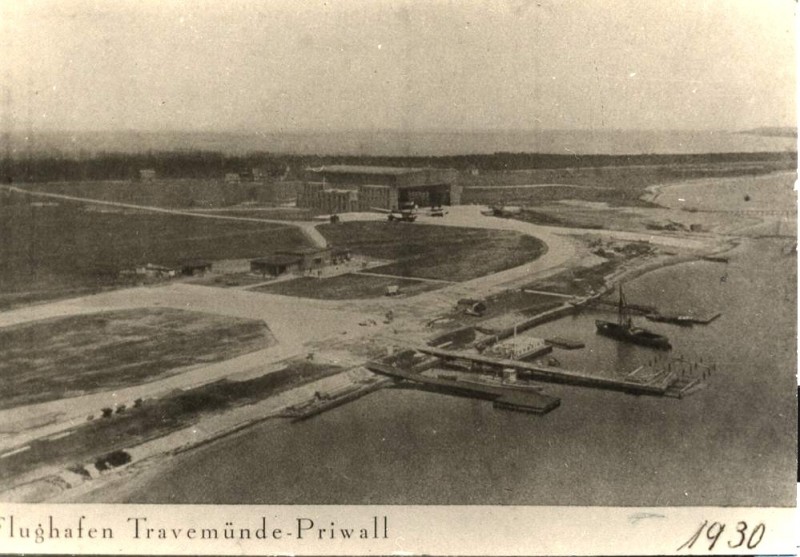 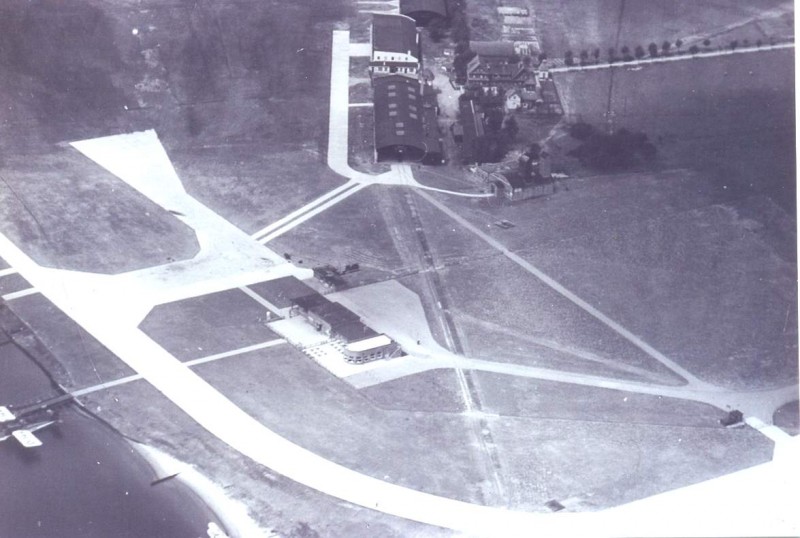 Postcard of the Luft Hansa station building in the early 1930s. The building survived the war and still exists today (priwall.net). 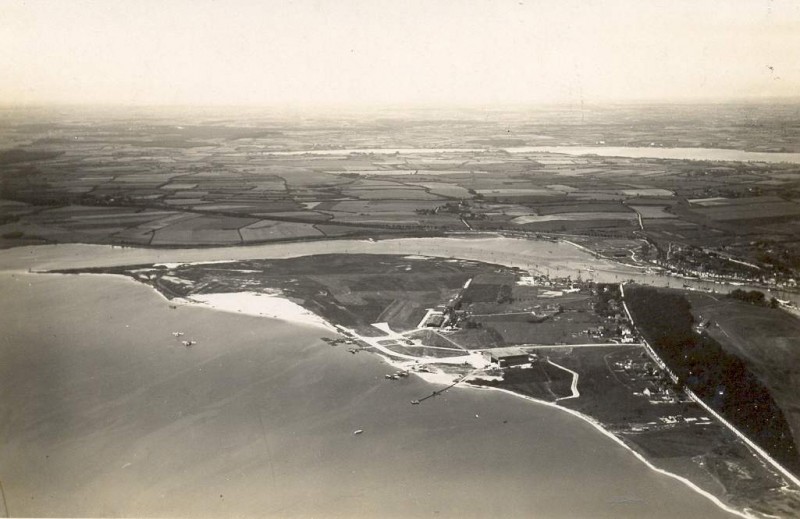 Postcard of the entire airfield looking west in the early 1930s (priwall.net).

As 'E-Stelle See' (Test Center Sea) the airfield was responsible for the testing of all naval aviation.
While it initially focused on seaplanes and amphibians, it featured a carrier deck with arrestor-gear from 1938.
It was specifically built to test carrier landings, carrier aircraft, and the arrestor gear itself.
Although the nazis did not own a carrier, they were building one, the Graf Zeppelin.
However, as construction never progressed beyond 90 procent the project was eventually halted, and eventually cancelled.
Three forced labour camps existed on the Priwall peninsula, all for services to the test unit.
The three camps (I, II and III) housed 150, 80 and 250 foreign forced labourers respectively.
Testing continued throughout the war, although the airfield also became an operational field.
Towards the end of the war the airfield for instance operated a small number of BV222 'Wiking' flying boats for the secretive KG200.
In 1945 several air attacks were carried out on the airfield, one of which sank one of the last remaining BV222s
Near the end of the war a seemingly endless flow of refugees, fleeing for the Red Army began to flow onto the peninsula, looking for a route to Travemünde, just across the river.
Ferries were used to transport them to safety.
The airfield was ultimately occupied by English forces in May 1945. 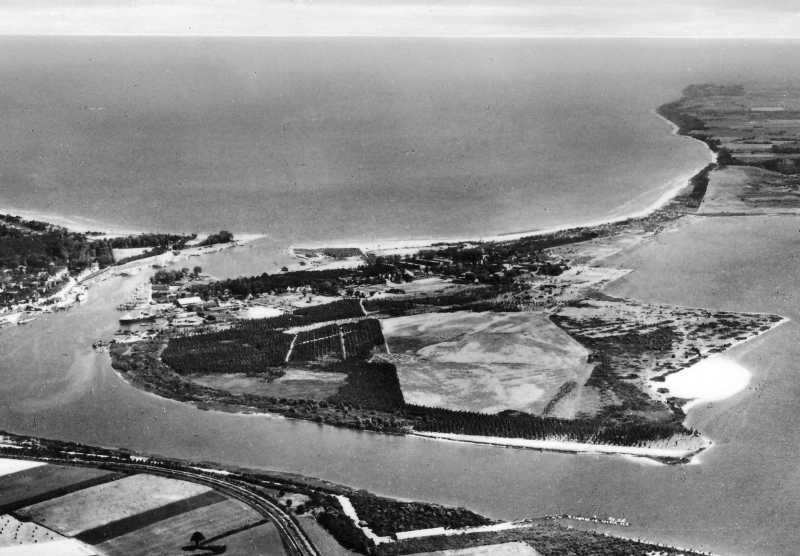 The Priwall peninsula, presumably late 1950s. Trees have been planted on the former airfield, but some buildings are still standing,
such as the large hangar - still visible as a dark spot right of the center (seelichter.de).

Due to the splitting up of Germany in occupation zones, the airfield found itself on the border between the UK occupation zone and that of the Soviet Union.
This made the airfield useless, so it became a refugee camp.
Most hangars and many other buildings were demolished, but the Lufthansa terminal was used for housing for refugees.
The English left the airfield in 1948.
The terminal building was later used by the German customs service and eventually abandoned.
Priwall effectively became an island when the border was closed by East Germany.
The island slowly reformed into a touristic location, with an FKK nude beach directly opposite the watch towers of the East German border guards.
This situation lasted until the end of the Cold War in 1990 and the reunification of both Germanies a year later.
By 1990 the terminal building was empty, the windows boarded up and it was about to fall to ruins, when it sold off to private owners and restored.
Today the area is a tourist resort and the actuual airfield has become a nature preserve.
Some airfield infrastructures still exist though, such as the former Lufthansa terminal and the 1935 administration building.
A hospital was located in the former barracks until the late 1990s. 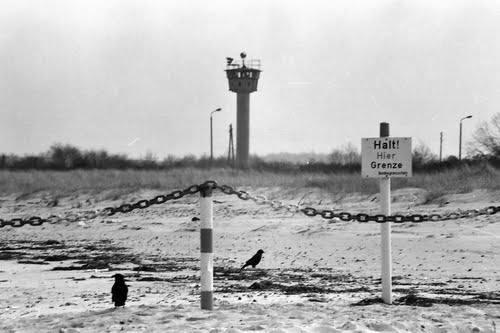 The Inner German border (the division between East- and West-Germany) on the Priwall peninsula in 1982. 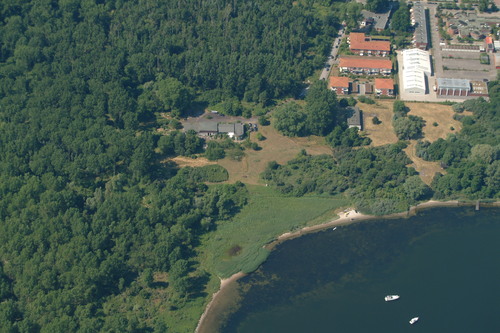 The Old Lufthansa Terminal at Priwall in 2008

Overview of the former airfield in 2010 (Google Earth).

Many thanks to Volker Böhme for providing me with a lot of extra information and corrections!