Tullinge airfield (swedish: Tullinge Flygstation, also known as Tullinge flygfält, F18 Tullinge and Tullinge flygplats, ICAO: ESCN) was an airfield in country
The airfield was built from 1943 on the location of the never utilised krigsflygfält (wartime airfield) F40 built during World War II. It opened in 1946 as an air defence airfield for the protection of Stockholm with three grass runways.
Between 1946 and 1950 3 fighter divisions were stationed at the airfield, all equipped with SAAB J-22s. in 1947 construction of a mountain hangar began. When the DeHavilland J28 Venom came into service, two of the runways were hardened. The 91 Swedish Venoms soon became obsolete however, and were replaced in 1956 by the Hawker J34 Hunter. The Hunters were assigned to two 'jaktflottillas', one each at F8 (Barkarby) and F18.
The transition was complete when the third division transitioned in the spring of 1956.
The 1950s also saw enlargement of the mountain hangar complex. Original plans were to connect the new hangar to the old one, but by 1958 construction was halted, as the new BAS60 project was considered to give better protection from nucleair attacks. Instead, parts of the tunnels were used for an underground air defense facility called STRIL.
On the tenth anniversary of the airfield, the flotilla started the demonstration team Acro Hunters, who did their first show on the F18 demonstration day in June of that year. Sonic booms were included in the demonstration program, as the J34 was the first Swedish Air Force plane that could reach supersonic speed, even if it took a dive into the display area to reach it. 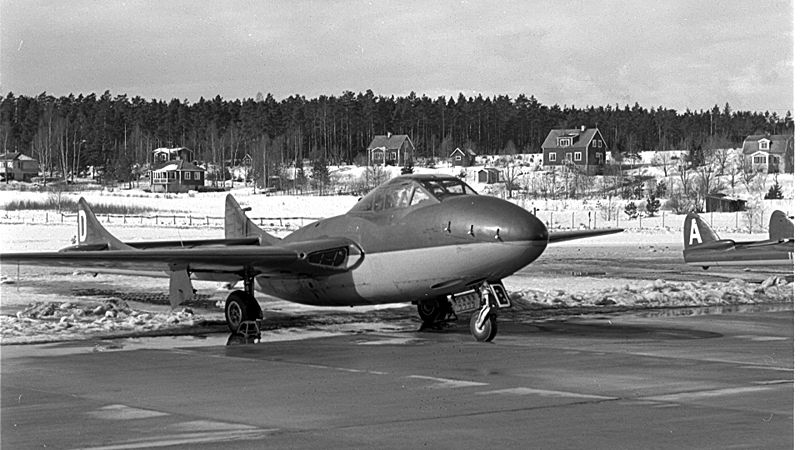 In June 1962 the transition to the J35B Draken began. Although the first J35Bs lacked a radar, their performance was such that they were a vast improvement over the Hunters. Later J35Bs did have a radar as well as a video link. All three divisions of the 'flotilla' retained their Drakens until the airfield closed.
In 1964 the Acro Deltas were formed, successors to the Acro Hunters. They succesfully displayed their routines on international air shows, such as the one at Le Bourget in Paris. F18 lost its second Division in 1968. In 1971 and 1972 the base trained the first Finnish pilots for the Finnish F-35D Draken.
The airfield lost its last two Divisions in 1973 and the airfield became a dispersal base for F1 Hässlö. F1 had become the Flotilla responsible for the air defense of Central Sweden and used Tullinge regularly. A liaison flight was transferred from F8 to F18 in 1974, using Saab 91 Safir (Sk50) and Saab105 (Sk60) trainers. Also in 1974, several air force schools came to the base when F2 Hägernäss closed. One of those schools featured a full STRIL60 Air Defense Center. With the closure of F1 Hässlö in 1981, its third Division was moved to Tullinge, but still reporting to F1. The F1 division at Tullinge took the unofficial name of the Royal Capitol Fighters (Kungliga Hufvudstadsjakten). Whilst remaining at Tullinge the Division began reporting to F16 Uppsala in 1983, flying J-35Fs. Also in 1983, the STRIL air defense system at the base was closed, although its radar continued to be used by F13.
In spite of all the other schools moving to F20 Uppsala in 1986, the STRIL60 school remained at Tullinge. Their aging equipment was considered to fragile to be moved and the training provided too valuable to be closed. In 1984 the city of Stockholm decided the airfield was to become Stockholms new international airport by 1991, replacing Bromma which was to be shut down. Widespread civilian opposition from the regin prevented this plan.
F18 seized to exist as an independent military unit in 1986. It became a detachment of F13 Norrköping until 1992. The F-18s of the US Naval Demonstration Team 'Blue Angels' visited the airfield during its air show in 1992. In December 1992 the base held its final recall exercise. It became a detachment of F20 Uppsala in 1992. The STRIL school closed and moved to Uppsala when the STRIL60 system was finally phased out in 1994.
Air Force operations stopped on 30 June 1995. 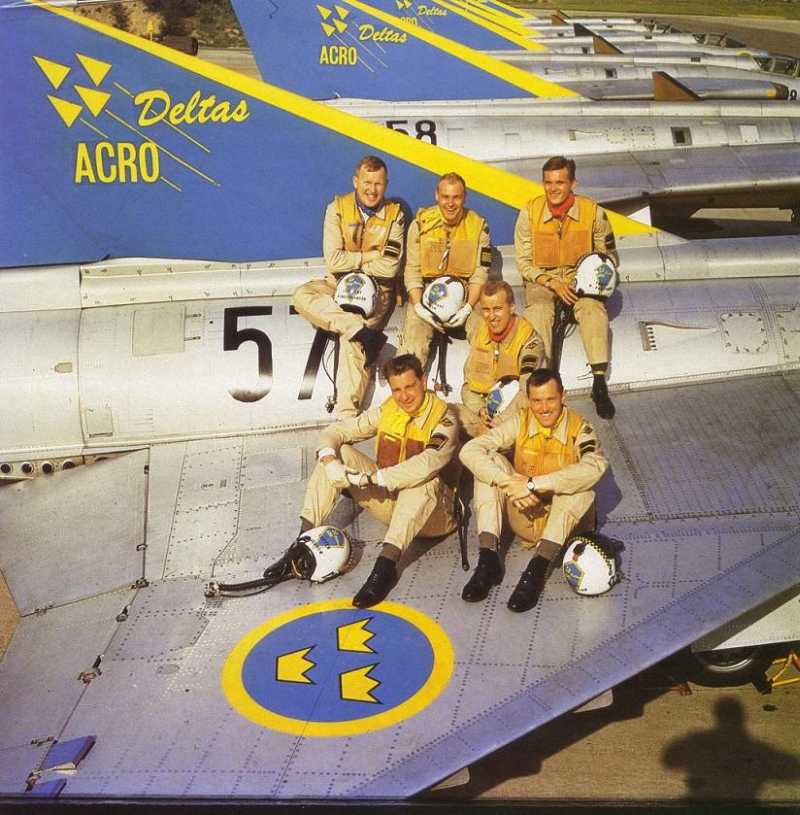 The Acro Deltas posing at F18 Tullinge during their 1964/1965 existence (Wikimedia). 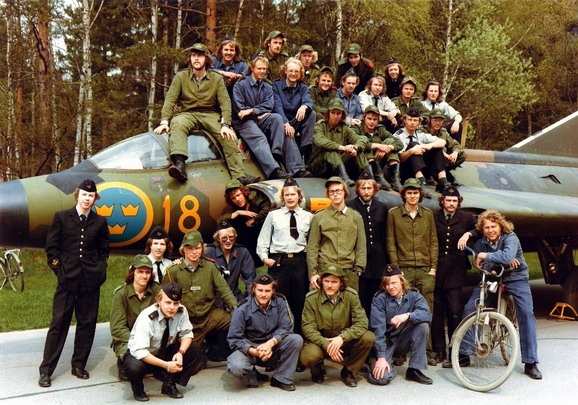 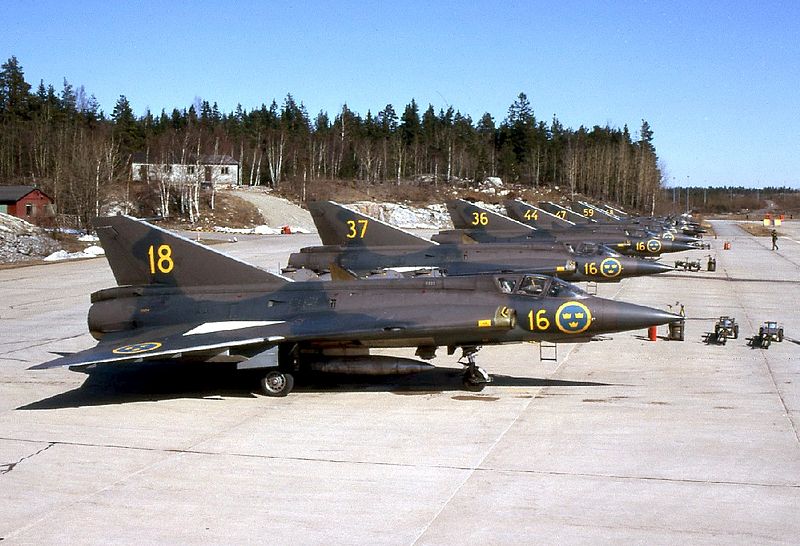 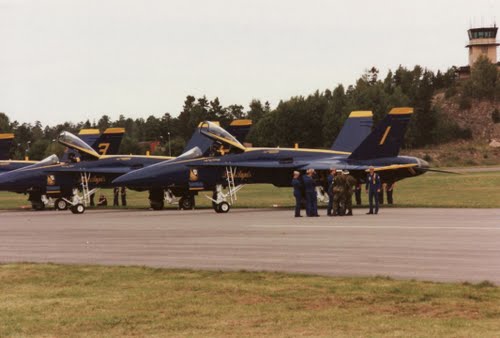 USN Blue Angels parked in front of the tower at Tullinge in 1992.

A police helicopter unit had been based at Tullinge since 1998. They had moved from Barkarby into Hangar 81, which had been used by the Liaison Flight until 1986. The police had briefly used that hangar before in the 1970s, but was forced to move out when the Air Force intended to use it again.
On the night of 7 February 2002, fire broke out in the Hangar 81 complex. When firefighters arrived, the southern part was completely in flames. The fire completely destroyed the police's recently delivered first Eurocopter EC-135P2, two of their older Bell 206 Jet Ranger and a private Cessna 172. The police subsequently moved out to Berga Heliport.
Civilian use of the airfield continued until 1 October 2004. The last flights from the airfield were made by the Botrurka Flying Club, which moved to Barkarby to merge with the Barkarby Flying Club.

The airfield became private property in 1997. In 2000 it was incorporated into the municipality of Botkyrka. Since, barracks have been pressed into use for student housing, messes have been converted into restaurants and base offices have become commercial offices. Hangars have been torn down. Parts of the airfield were used for police and civilian driving schools.
The whole of the former military area now called North Riksten or Riksten outdoor city. Northern Riksten is to be built in several stages to a total of 2500 dwellings and a new business park. The homes will be divided between villas, condominiums and rental apartments. The control tower was demolished in autumn 2009. Deconstruction of the platforms taxiways and runways began in 2007 but was still not complete by 2010. The underground hangars were converted into an underground server complex. 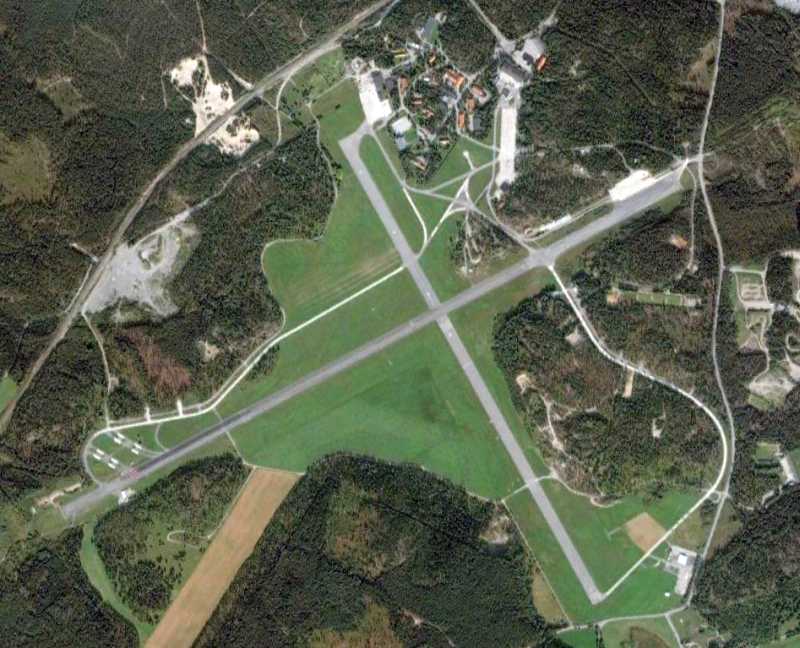 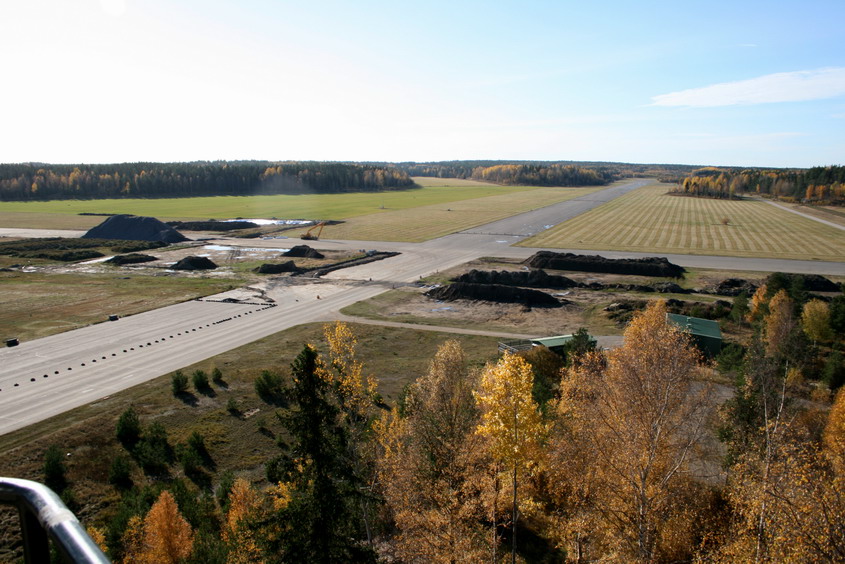 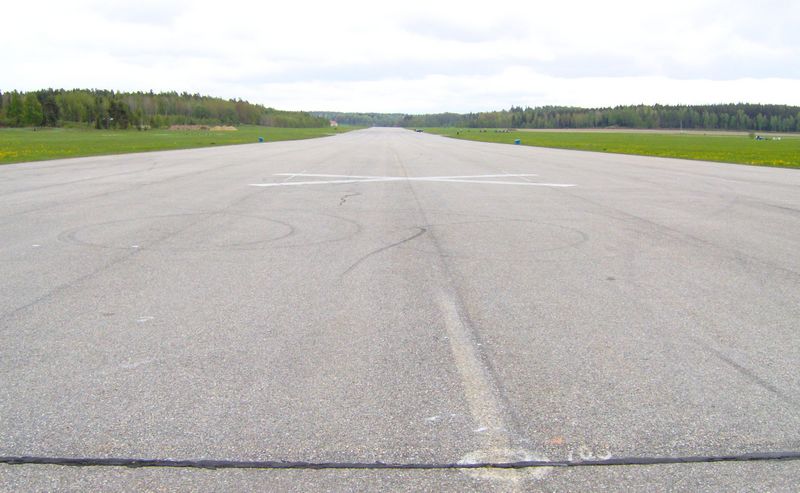 Photo of the runway, clearly marked with a white X for closed, in 2006 (wikimedia.org) 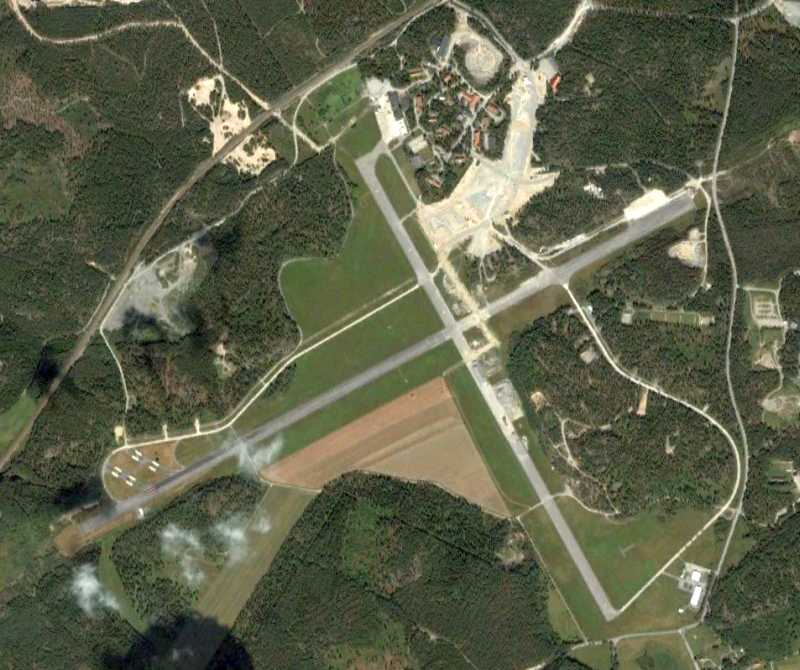 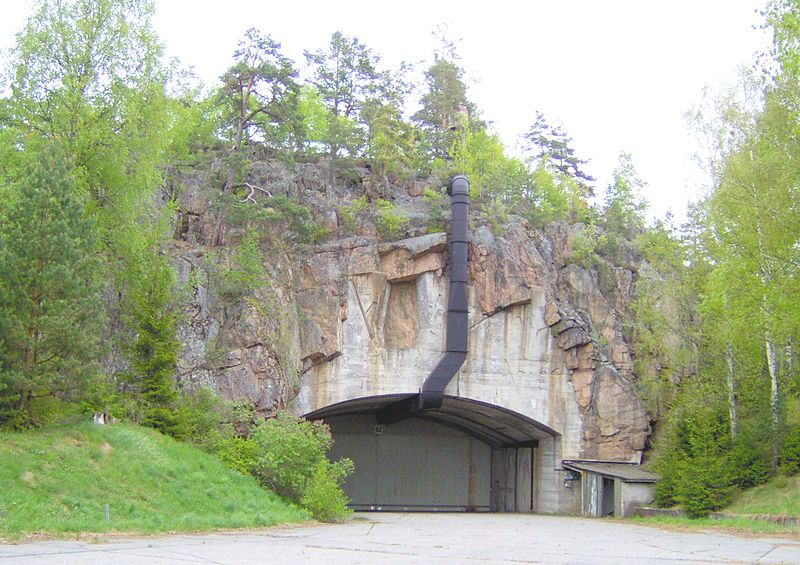 The entrance to the mountain hangar in 2008, before it was converted into a server complex (wikimedia.org) 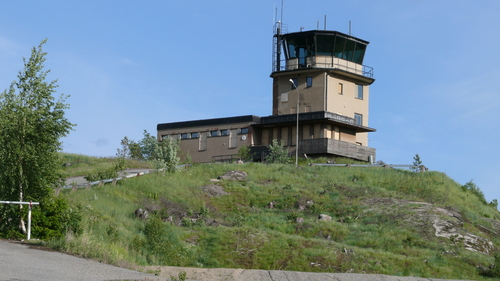 The control tower before it was torn down (Tommy Högberg) 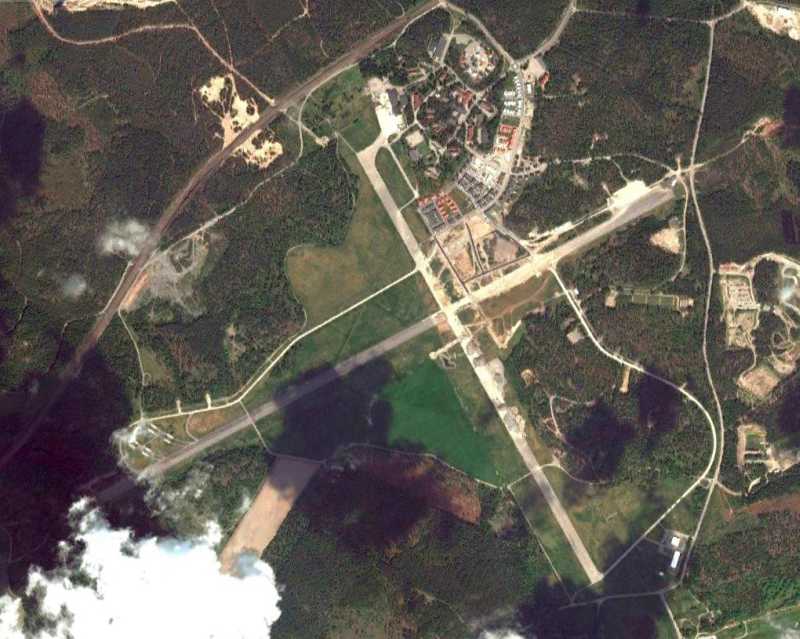 Major portions had changed considerably by 2010 and the runways were used to store gravel (Google Earth). 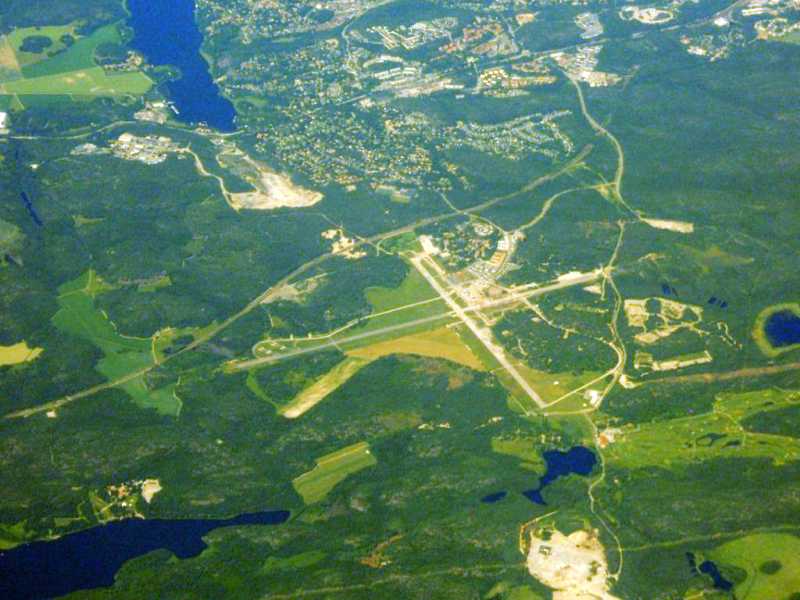 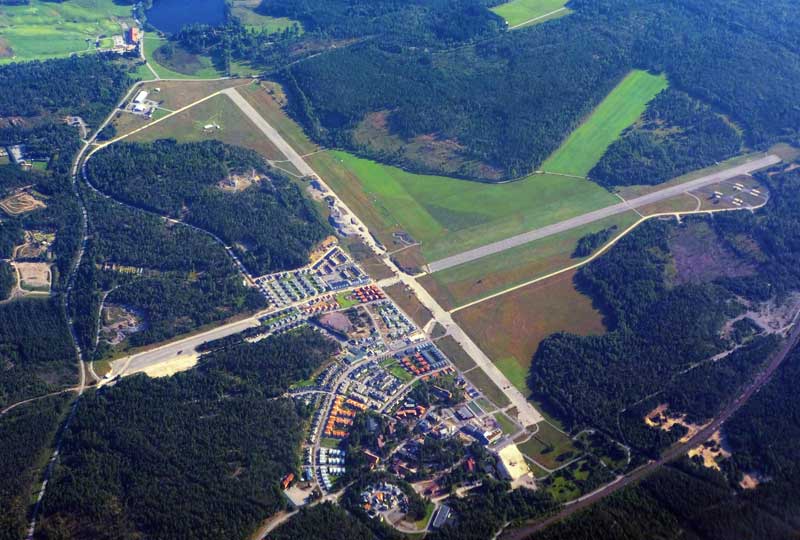 Tullinge seen from the north on 24 August 2014 (Photo: Magnus Emanuelsson - via e-mail). 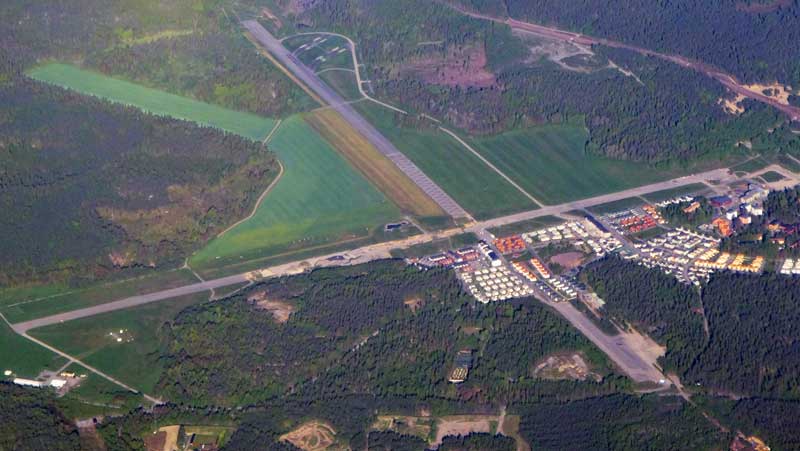