Valensole airfield (french: Aérodrome de Valensole) was a small airfield 630 kilometers south-southeast of Paris.
Originally 78.5 hectares, the area of the airfield was extended to 84 hectares on 27 March 1939. After the armistice of 1940, the French Secretary of State determined that the aerodrome was to be leased long-term to an aeroclub.
Shortly after occupying the remaining parts of France in early 1943, Regia Aeronautica FIAT G.50B trainers used the airfield for a while, but soon Italian troops were ordered to neutralize the old landing area. Their digging resulted in deep trenches, spaced approximately 200 meter, augmented every two or three meters by furrows made by plows. 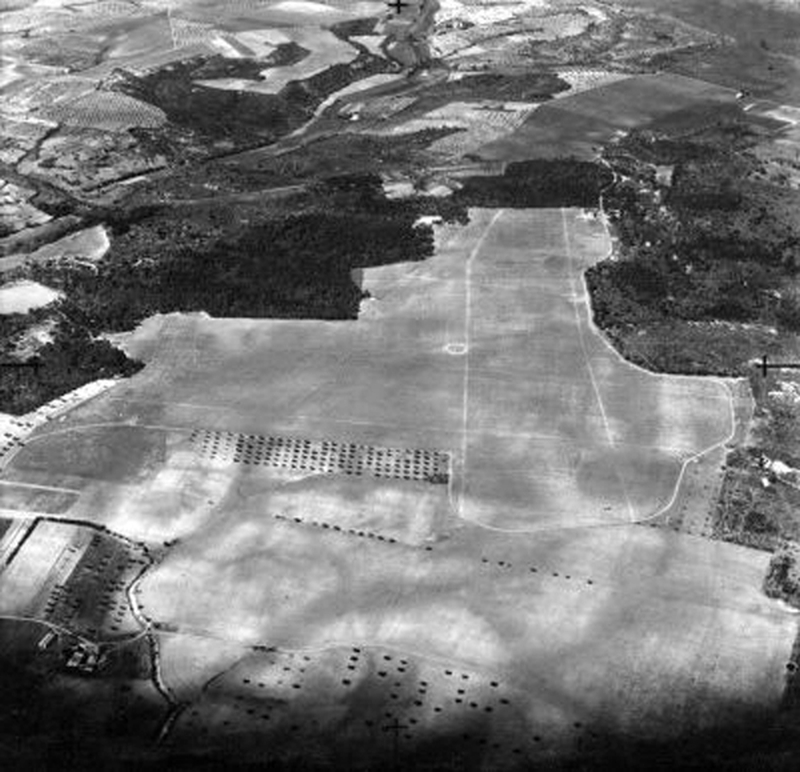 May 1945 . The picture shows the ditch made by the Italians. The circular central airfield marker (private coll. Jean-Valéry Masset)

Although in March 1945 the French Air Ministry was instructed to terminate the lease culture because the land was "in principle for the use of military aviation", a conference held in April 1946 concluded that the field Valensole-Catalany, as well as those of Vinon and Saint-Maximin, were no longer of interest to either civil or military aviation.
As a result, the field continued to be used for farming until further notice and public air traffic to the aerodrome was prohibited by Ministerial Decree of 6 February 1947. It was not until 1960 and because of the closure by the Air Force of its direction finding station installed on the airfield that all departments could finally agree that the field could be sold off.
Around this time, a request for the provision of the old station building arrived from the Physics Laboratory of the École Normale Supérieure. Interested in the proposed studies, the Ministry of Defence agreed, which lead to a temporary occupancy agreement in May 1962. In subsequent years, significant developments at the old airfield, lead the laboratory to seek a less provisional form of occupation.

In July 1969 the Minister of Transport decided to decommission the aerodrome and in June 1973 a ministerial order definitely transferred the old airfield at the Ministry of Education as a research facility. 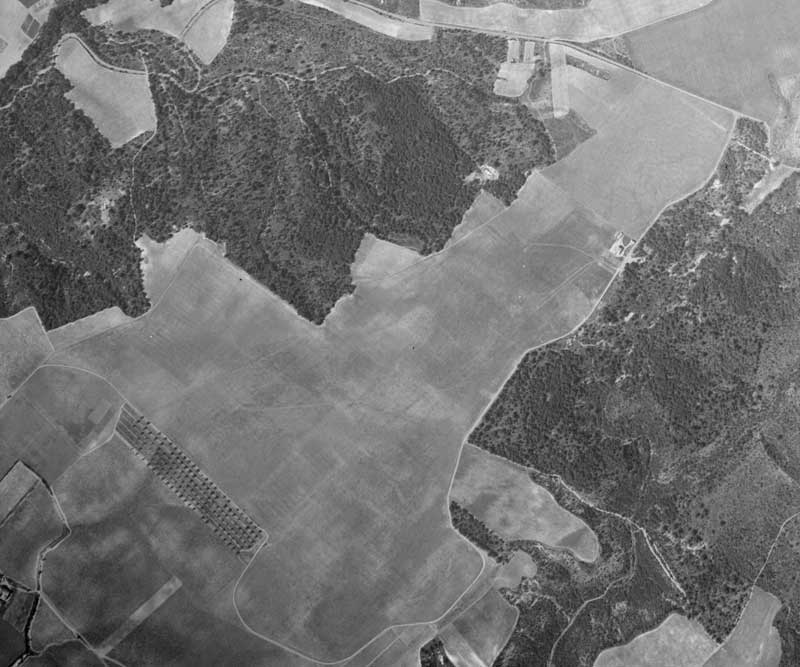 Valensole airfield was just another disused field on this photo taken 13-07-1958 (IGN.fr). 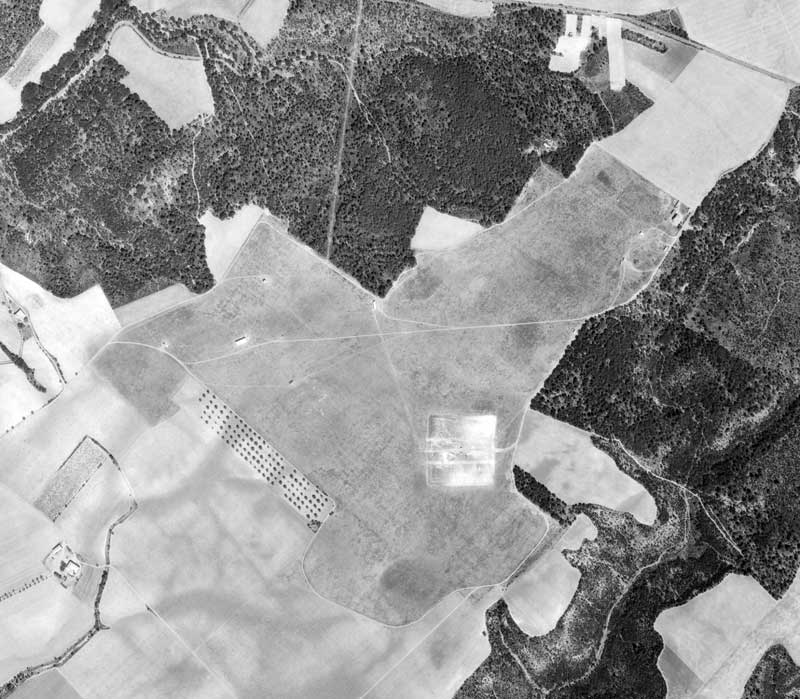 A large square was laid out along with some paths at the airfield in this 1967 photo (IGN.fr). 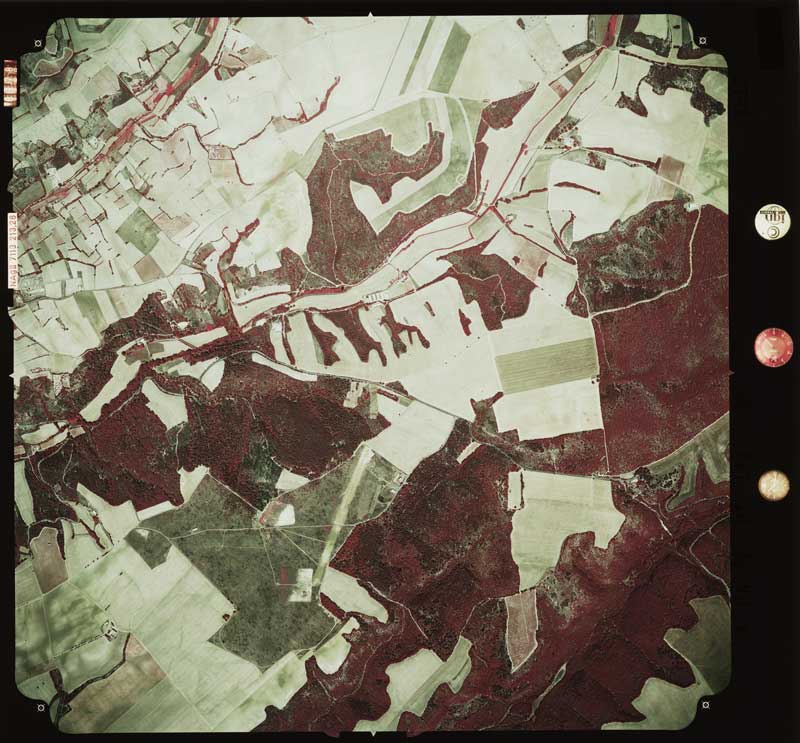 The beginnings of an airstrip began to appear in this 1982 photo (IGN.fr) The airstrip had reached its full lenght in this photo taken in the summer of 1987 (IGN.fr) 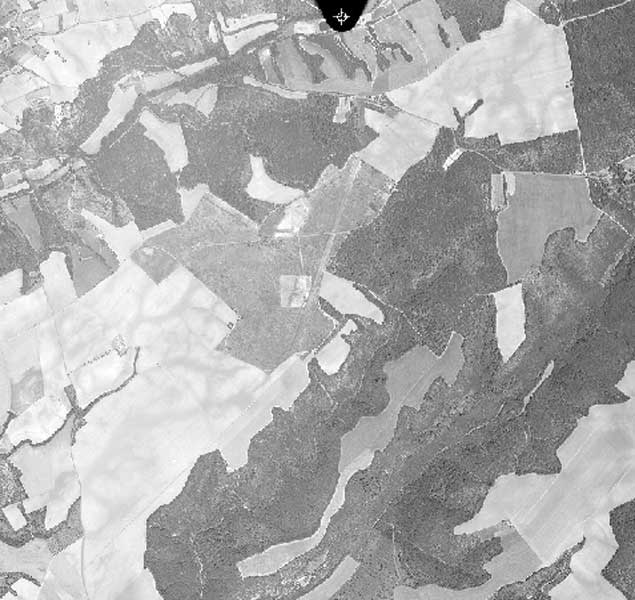 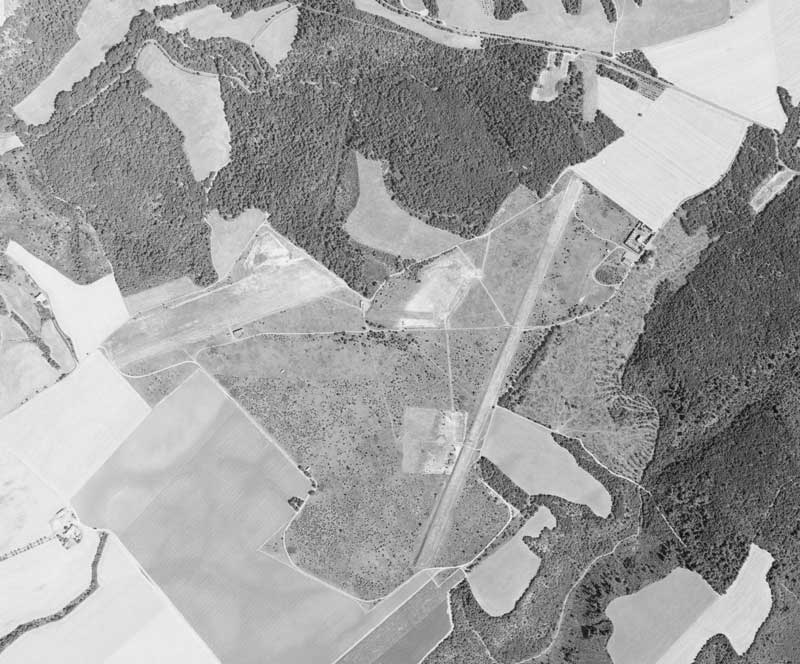 A smaller grass runway had appeared on the northwest corner of the airfield in this 1993 photo (IGN.fr) 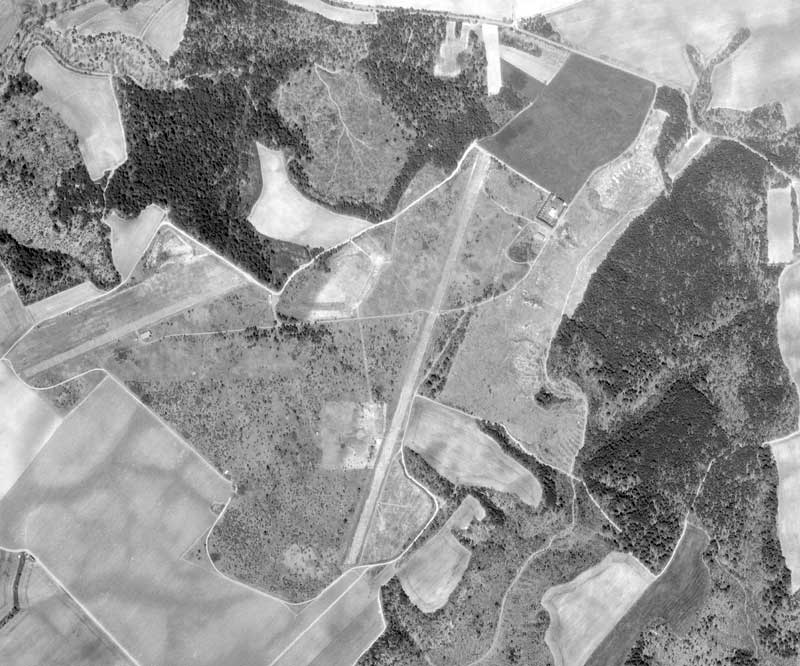 The smaller second runway was still noticeable in 1997 (IGN.fr) 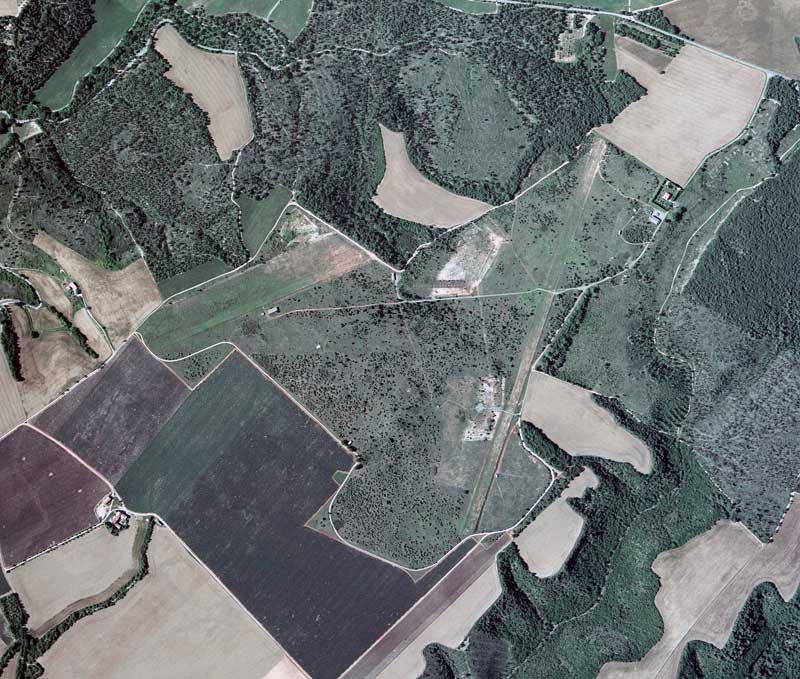 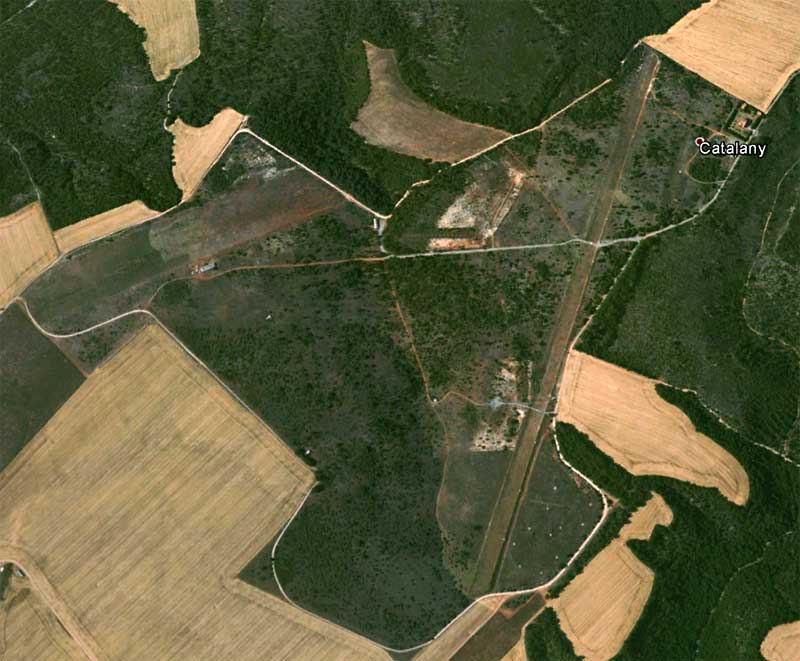 The airfield in 2004, still intact with two runways (Google Earth). 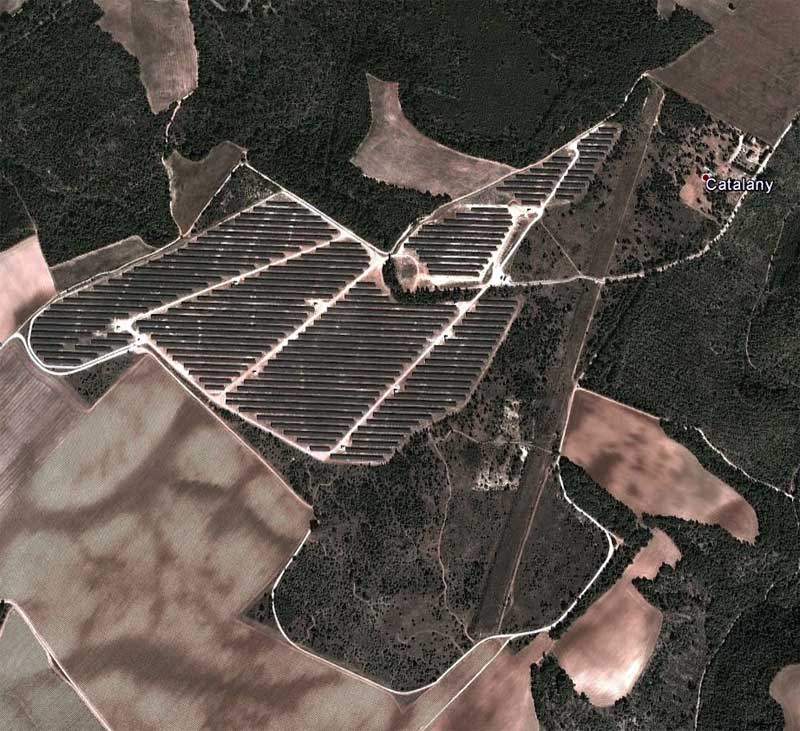 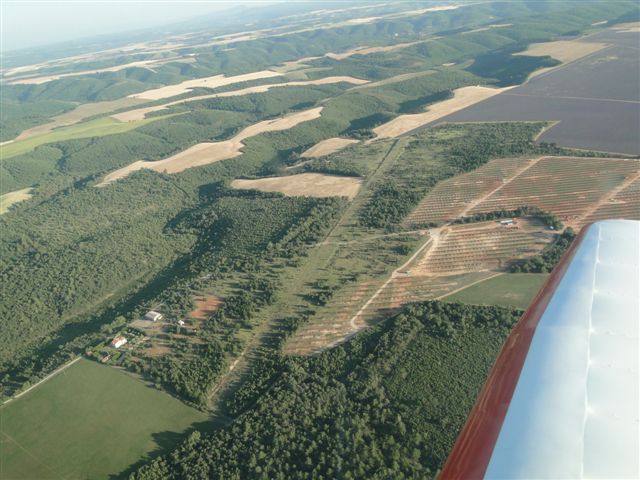 Undated Valensole aerial picture from Serge Boichot (source www.aviation-pilote.com)
(Note about this picture: we never managed to contact Serge Boichot. If this picture is yours, please contact us.) 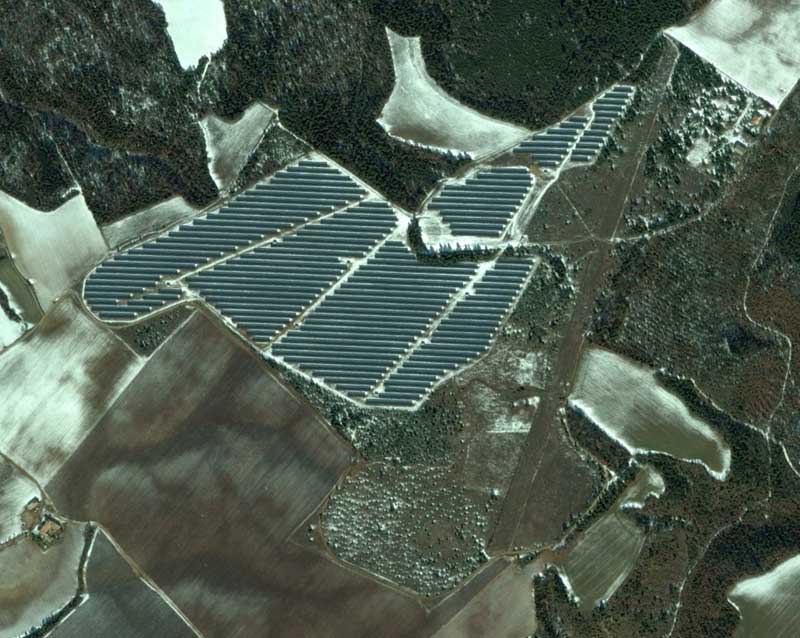