The Vatican City heliport (Latin: Portus Helicopterorum, Italian: Eliporto di Città del Vaticano, ICAO: VA-0001 ) is built on the extreme west end of Vatican City.
The heliport was built under Pope Paul VI (Giovanni Battista Montini, 1963-1978) in 1976 on a bastion of the Vatican wall. Roman Pontiffs regularly use it when they go on their numerous pastoral journeys. The heliport consists of a rectanglular landing platform connected to a circular parking. It has been placed under the protection of the Black Madonna of Czestochowa (Poland) depicted at the site in a bronze image. Because the Vatican does not have its own aircraft, a designated Italian Military helicopter (until 2012 a Sikorsky SH-3D, in 2013 replaced by an Augusta-Westland AW139) is often used as a transport for the Pope. 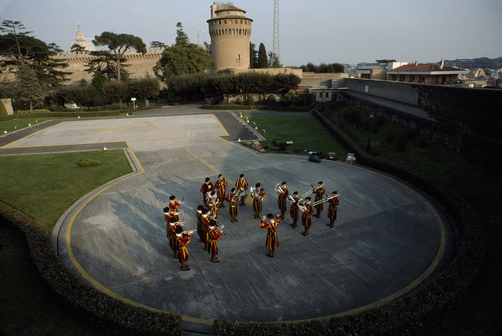 Vatican City with the St. Peters cathedral in the upper left and the heliport in the lower right corner (official Vatican website)