Crest of Vaerlose Air Base

Vaerlose air base (danish: Flyvestation Værløse, ICAO: EKVL) was an airfield 20 kilometers northwest of Copenhagen.
The airfield was built from 1934 on the lands of an army camp established in 1910. Until February 1940 hangars and facilities for 5 squadrons were built. The first was a command squadron for the air wing. A reconnaissance squadron and a fighter squadron of each of two army devisions made up the remainder.
Stationed at the base were new Fokker D-XXI fighters and Fokker C-V reconnaissance aircraft, tasked with the defense of Copenhagen. Many were not combat ready however, because their locally produced machine guns had not been installed yet. In the early morning of 9 April 1940 the airbase was attacked by Messerschmidt Bf110s of the Luftwaffe. During the attack, which lasted about 45 minutes in 5 waves, over 90% of its aircraft were destroyed. A reconnaissance aircraft that had just taken off was shot down, killing its crew. The Germans had done an excellent job: they were clearly only looking for aircraft and left the base infrastructure intact for their use. Within the hour a telephone call ended all opposition from the base. 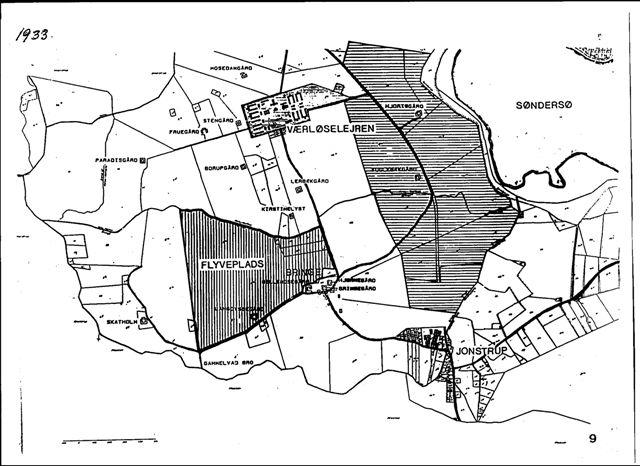 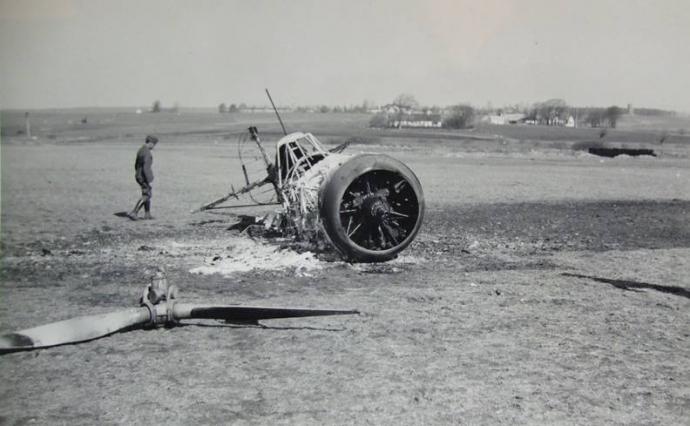 During World War II the airfield was used by the Luftwaffe. To make room for them, the Germans ordered all Danish aircraft to be crated and taken off the airfield. On 25 April the German Swastika flag was flown over the airfield for the first time. One of the first things they did was mask the complex with green paint. The Luftwaffe used the airfield for several units. A weapons school (Schießschule IV/JG5) was one of them. A minesweeping and mine laying unit, 5 Minensuchstaffel flying converted He111 medium bombers, also served from Vaerlose. Finally, it also saw nightfighters and captured Allied aircraft (such as USAAF B-17 42-39974 in 1944).
As the German eastern front began to collapse, flights carrying refugees from the Baltic states and East-Prussia began coming to the airfield. By the capitulation there were 131 aircraft at the base, but a large part of those had only arrived the previous day from the eastern front. 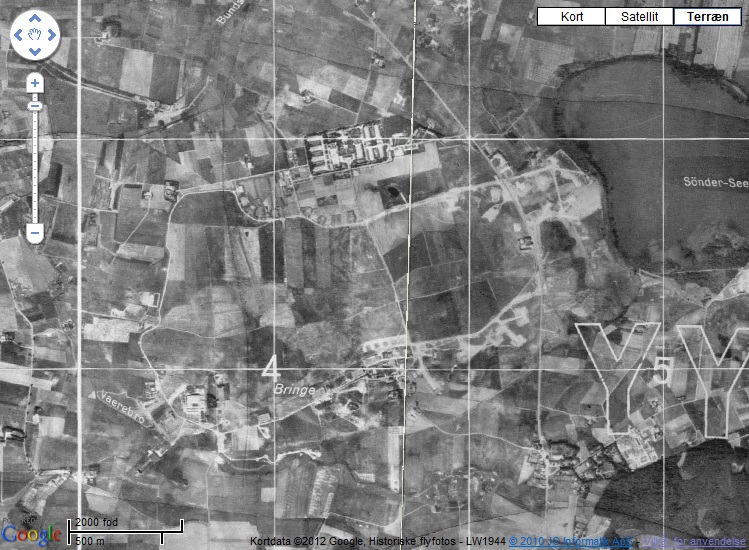 A few days after the capitulation two Danish officers demanded access to the base, but were turned away by the guard. Although the Germans had already surrendered to the British, somebody had forgotten to inform Vaerlose. It required a British pilot to fly from Kastrup to Vaerlose to get the Germans at the base to surrender. The airfield served as a refugee camp immediately after the war.
The Danish army did not return until early 1946. The airfield began to expand, a process made easier by a 1942 German order to the inhabitants of Bringe to vacate their homes and leave the area. In March 1947 a Flight Mechanics School opened at the Værløse camp.

October 1950 the new defensive scheme came into effect and thus the independent Royal Danish Air Force was born. In January 1951 Vaerlose became the home of Danish Air Command and Eastern Command. It also became home to the Officers School and the Air Force Sergeant and Reserve Officer School. At the same time Esk722 light transport squadron was formed at the base. When the squadron transformed to a SAR unit, a station flight was set up for minor transport duies.
In 1952 there was a lot of controversy in the newspapers about the upgrade of the runways, so they could handle jet aircraft. The reason why Copenhagen municipality supported the local parish council, was that the enlargement of the area would stretch all the way to Søndersø Waterworks, which had just been refurbished for many millions. It was proposed to move the air base to the north of Zealand, but Secretary of Defense Harold Petersen thought it would be irresponsible to spend up to 80 million dollars to move the air base. The new (NATO standard) runway was completed in December 1953.
Eastern Command merged with Western Command in 1955 and moved to Karup. In its place Training Command came to Vaerlose. Esk721 came to the airfield in May 1956, bringing Catalinas, C-47 Dakotas and C54 Skymasters to the airfield. Esk722 was declared operational as a SAR unit in 1957. In February 1962 it accepted the Naval Air Service (Søværnets Flyvetjeneste) as part of the squadron. Training Command decomissioned in 1969, but the schools remained at the airbase. 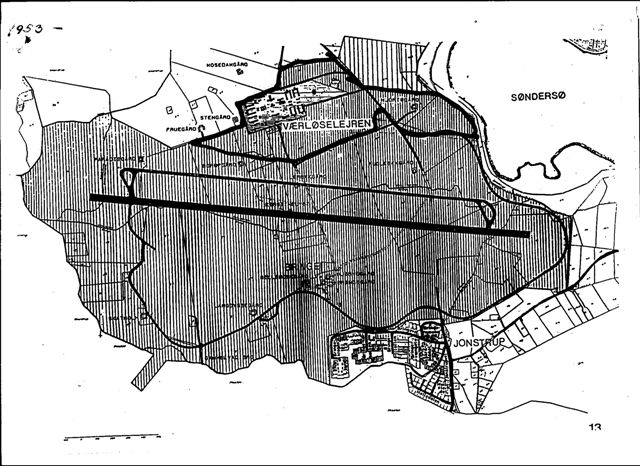 In 1970 the officer schools merged to become the Air Force Academy. Between 1974 and 1975 the airfield received an update. The runway was renovated and strengthened and a platform to support ACE Mobile Force was built. Additionally a new hangar and 12 concrete shelters were built in relation with NATOs rapid response plan. A new control tower south of the runway and a passenger terminal and operations bunker north of the runway completed the update.
The Navy Air Service became an independent unit at Vaerlose in 1977. Life at Vaerlose was pretty straightforward during the remainder of the Cold War and even the final decade of the 20th century. 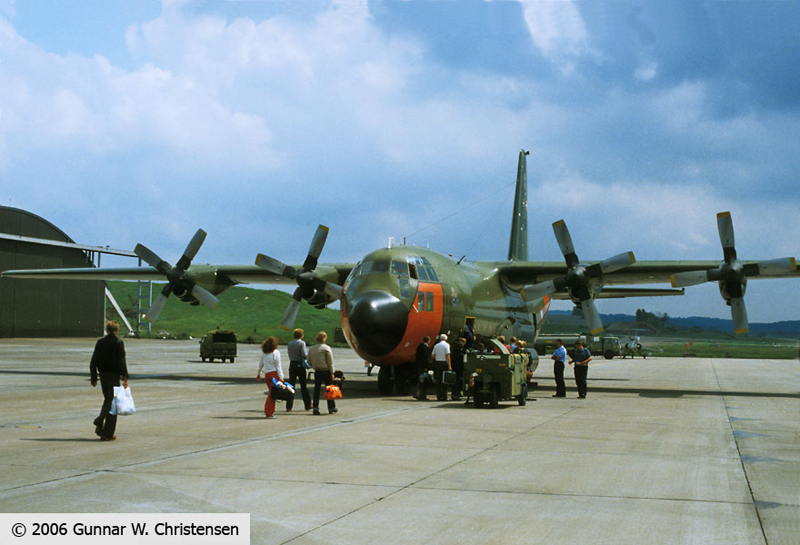 C-130H Hercules B-680 preparing for a flight to Greenland in 1980. All Danish military flight operations to overseas territories of the Kingdom were supported from Vaerlose AB. Notice the visiting F-104G Starfighter in the background (Gunnar W. Christensen, via tog-billeder.dk).

The announcement that Vaerlose would close came as a blow to many. The last flying units were to leave the base in April 2004. Even worse: the oldest military airfield of Denmark was to close completely. The old camp area north of the airfield was sold off to Kuben Byg A/S to become a residential area. During 2007 the entire field was to be vacated. The installation remained in the hands of the Defense department, and in 2008 it announced the public would not be allowed access to the site. Instead it was decided to conserve the airbase. Danish local and state authorities are currently assessing future use of the base and its infrastructure. Vaerlose AB seen from the northeast in 2005 (photo: Magnus Emanuelsson, via e-mail). 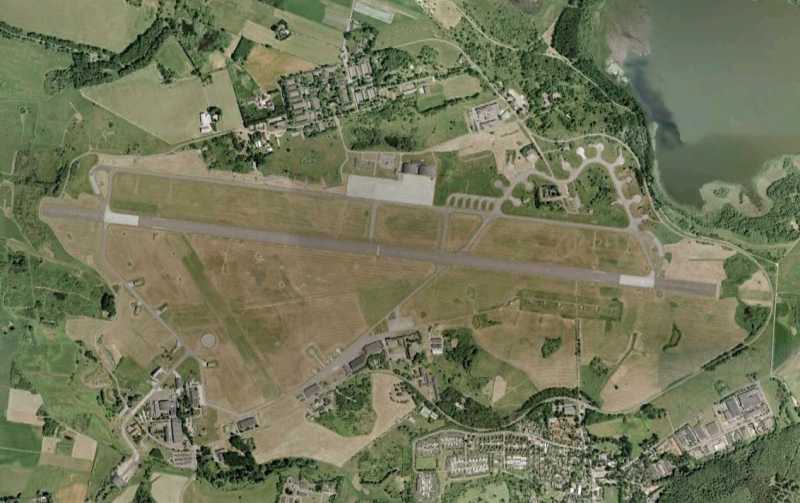 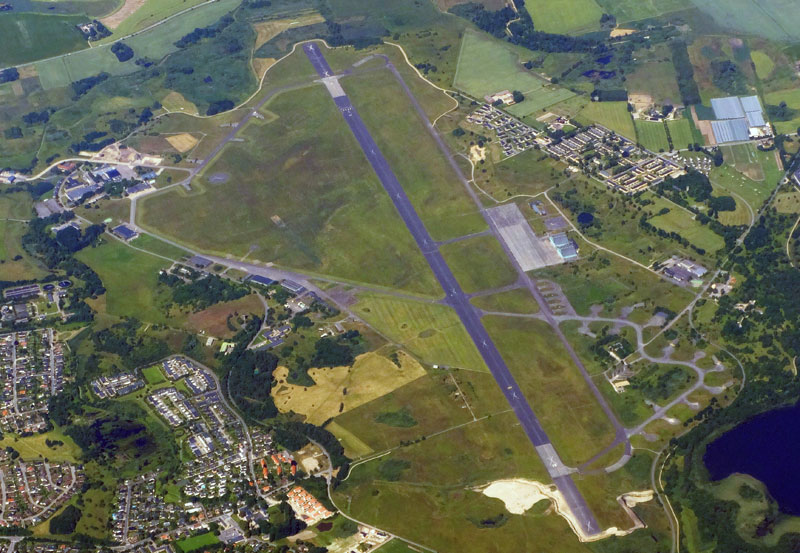 Værløse as photographed by Magnus Emanuelsson in July 2017. Clearly visible are large Xs over the full length of the runway.