Navy Support Unit Veere (Dutch: Marinesteunpunt Veere) was built in 1916 as a mine storage depot and sea plane unit.
The mine storage depot consisted of a one piece concrete hall, some small bunkers and a unique E-shaped dock on the east bank of the canal. The float plane unit, built as a full Marinevliegkamp (MVK, or Naval Air Station in english) was located on the opposite bank, some 200meters closer to the sea. It had two hangars and a slipway and was pressed into service on 2 September 1915. Undated photo of the "Shed for aircraft at Veere". As construction appears to be ongoing, this must be sometime in 1915.

Inside the hangar of MVK Veere in 1917, to the left a Friedrichshafen, in the rear a Gotha WD-II (collection Nederlands Instituut voor Militaire Historie).

The Navy closed the flying facility in 1920 due to budget cuts. Between 1919 and 1926 it housed a division of Fokker Aircraft, for the assembly of float planes, such as the Fokker F2 through F7 series.
By the Air Protection Act of 1936 Veere was classified as a Class-1 (highest) object because of its facilities for floatplanes. During the mobillisation Veere was home to 'Det. Veere', set up from two sections of a Navy company. The aircraft again made use of the old WW-I era slipway. In addition to the Naval Flying Unit, the mine storage depot and the nearby sluices were protected from air raids by the 76th platoon anti-aircraft guns, suported by 3 Hispano Suiza 20mm guns and an aircraft machine gun from Valkenburg.

Photographed sometime during the Interbellum (1920-1940), a floatplane is visible across the water. The Navy suppport Unit is visible in the lower left, on this side of the canal (NiMH, via Wikimedia).

In 1940 Veere was a support unit for the Marineluchtvaartdienst (MLD), occupied by 3 officers and 100-120 men. On 10 May 1940 four operational Fokker C-XIV-w and two non-operational aircraft were stationed at the base. Veere was attacked by He-111s on May 12th, destroying one of the Fokkers, and damaging another. During the evening Veere was the site of a friendly fire incident, when a returning patrol was shot at by nervous local AAA, kiling 3.
The base was evacuated on May 14th, when 4 airworthy C-XIV-w left for Cherbourg and from there to England.

The Germans used Veere as a support unit too, but did not station any aircraft at the site. It was visited by occasional Do-18, He-59, He-115 or Do-24s of the Seenotdienst (aerial rescue service), which made use of both sites. Mostly the site was used by the Rheinschutzflotille in protection of the Rhine.

Today the mine storage site is still largely intact. It was used for a range of services until recently. A decision on the fate of this monumental location is still pending. The area across the canal was reshaped into a marina. The slipway was removed several years ago, but its location can still be traced in aerial photography. 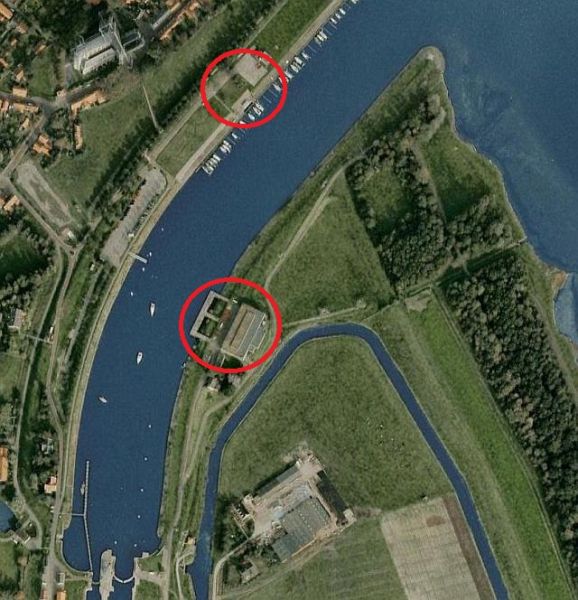 Overview of Navy Support Unit Veere in 2005, with the air unit located 200m across the canal (Google Earth) 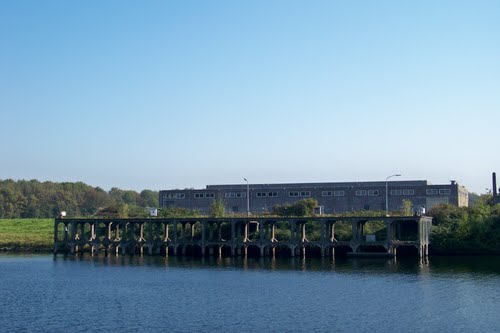