Verviers-Theux Airport (French: Aérodrome de Verviers-Theux, ICAO EBTX) is a general aviation airfield east of Liège in the province of Liège in Belgium.
The airport was started in 1931 by a group of aviation enthousiasts who wanted to fly gliders. Or as the local Royal Verviers Aviation club puts it: "Or rather 'glider': it was more of a chair equipped with wings, these reckless sent into the air by a winch, like a kite... and they were sitting on it."
The original location was soon outgrown, so the aviation club moved to Spa around 1932.
Many of the gliders at the time really were 'gliders': they did not soar to the sky, but instead they 'flew' down a local hill, and had to be pulled back up after the 'flight', either by hand, or by the horse of a local farmer.

After the war the flying club moved around the area for a few years, mainly at Spa, but also at a former American ALG owned by Charles de Kerchove.
After their hangar collapsed due to heavy snow in 1948, the club began building a hangar that was so large it could house two DC-3s.
Unfortunately the owner of the property asked for a monthly rent that was too high, so the club began considering moving to another location.
Club member Charles de Kerchove (club record holder with a flight that lasted 8 hours) provided a solution: he offered a field next to his property to the club.
This allowed the club to return to its roots and to own its own airfield.

The airfield was a lot smaller back then: the operating permit dated 3 July 1953 speaks of a runway of 575 meters. At the time the club owned 7 gliders, 2-Piper Cubs, a Luscombe and an Auster (the tow plane). The airfield had a (mandatory) telephone, but no electricity, lighting was by oil lamps.
By 1959 the pilots of Verviers had earned themselves a reputation of being able to land anywhere, as they trained on a track whose 'length' scared pilots from other airfields.
When in 1976 the motorway between Verviers and Prüm was built large quantities of rock and dirt were excavated.
Quick to seize an opportunity, the club realised a disadvantage (not being able to expand in the direction of the motorway) could be turned into an advantage if they could convince the constructors to dump their debris at the other end of the field.
This would level the field at this end, which would allow them to still expand the runway, and at the same time leave sufficient room for a safety zone of several hundred meters. The proposal worked and the field was lengthened to 735meters plus the safety zone.
The clubs buildings were constructed in a similar fashion, the clubhouse for example was paid for by a movie maker who used the old clubhouse as scenery in exchange for cash.
Rumour has it the club became so efficient at organising the build of their hangars at least two contractors went bankrupt because of the low price they had negotiated. 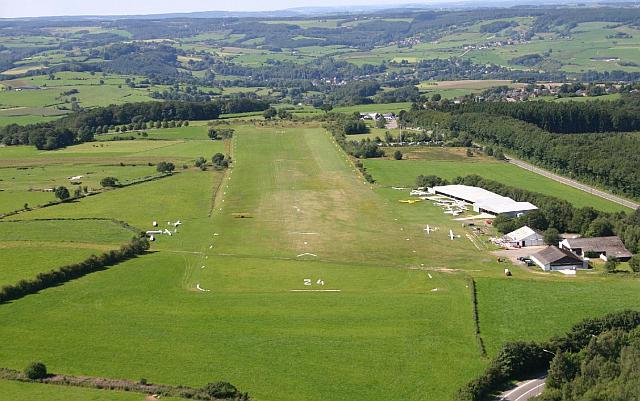