Vigna di Valle airport (Italian: Aeroporto di Bracciano-Vigna di Valle "Luigi Bourlot", also known as Idroscalo Vigna di Valle, ICAO: LIRB) was a seaplane station 25 kilometer northwest of Rome on the shore of Lake Bracciano.
It has an aeronautical history dating back to 1908, making it the oldest airport in Italy. Italy's first airships operated from here and from June 1910  the station supported the nearby air and meteorological research service (Regia Stazione Aerologica). A year later, the collection of weather data became seamless.
From 1912 the airport began to support the first seaplanes.
During World War I the station became the headquarters for the testing of aircraft. 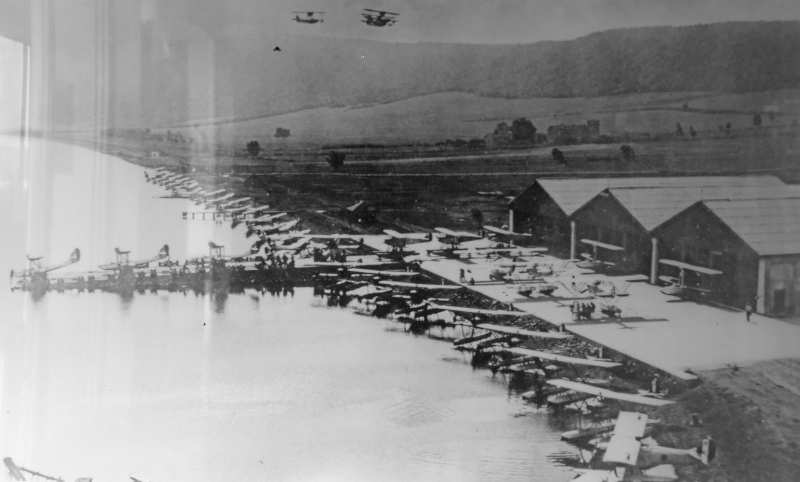 Photo of an undated​ photo of a busy day at the Idroscalo. This part of the airport still existed in 2022, albeit not accessible to the public . ​​​​​​The original photo can be found near the entrance of the Museo storico dell'Aeronautica Militare di Vigna di Valle (RonaldV).

After the war it formed the Centro Sperimentale Idrovolanti (the Experimental Center for Hydroplanes) and the 88º Gruppo Autonomo Caccia Marittima (88th Autonomous Maritime Fighter Group). Two Austrian hangars were built after the war as part of the Austrian war repairs. Built originally with wooden panels, these were replaced with metal sheets in 1925.
In 1926, the station was the starting point for a record breaking non-stop flight to Athens (Greece) by a Savoia-Marchetti SIAI SM 59.
Another hangar, today known as Badoni hall, was originally constructed in 1930 by the Badoni company, for the maintenance of Italy's largest seaplanes. It was used by 84º Gruppo who flew the Cant Z.506 'Airone' (Heron) three engined seaplane from the station until 1959. 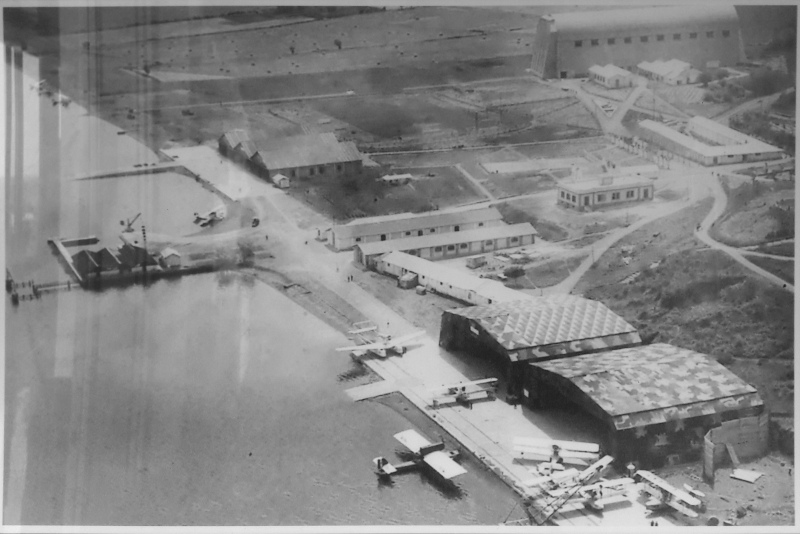 Photo of an undated but believed to be late 1920s photo of the Idroscalo Vigna di Valle during its phase of transformation and expansion: the lower half shows the modern seaplanes and their hangars, but, at the top right is still visible the imposing hangars that have hosted both the development and the construction of airships. Notice the twin-hulled Savoia Marchetti S.55 flying boat on the dock, just below the center of the photo. The original photo can be found near the entrance of the Museo storico dell'Aeronautica Militare di Vigna di Valle (RonaldV).

After World War II, the base hosted the Comando del Soccorso Aereo (Air Rescue Command) of the Italian Air Force. That role ended in 1961, two years after 84º Gruppo had moved to Rome Ciampino to convert to the Grumman HU-16 Albatross. 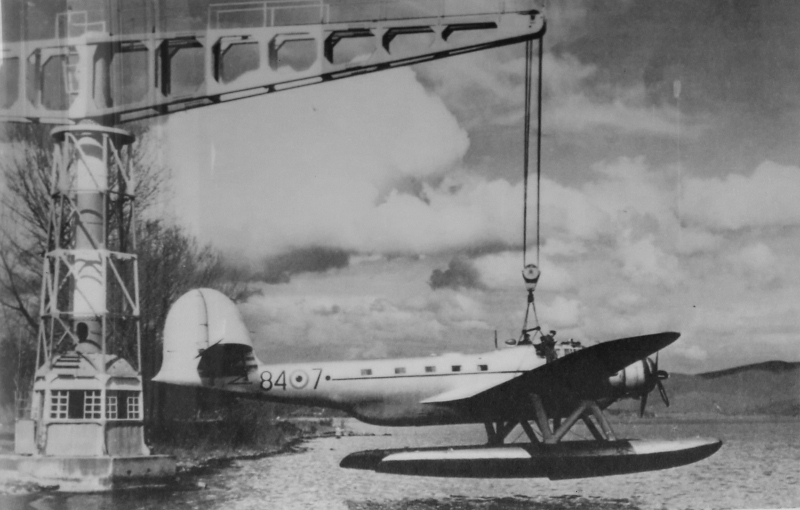 Photo of a photo of the large crane used to lift seaplanes like this 84 Stormo CANT Z506 from and onto the Lago di Bracciano. The original photo can be found near the entrance of the Museo storico dell'Aeronautica Militare di Vigna di Valle (RonaldV).

The second of the Austrian hangars was demolished in 1970. The remaining one (named 'Troster') is the oldest aeronautical building in Italy. In 1977, after a lengthy search for a location, the airport was inaugurated as the Museo Storico dell' Aeronautica Militare Italiana (Italian Air Force Museum). 'Troster' hall houses the oldest aircraft in the collection, covering the period up to the end of the World War One. One of the most interesting in here is the Ansaldo SVA-5 which actually took part in the raid on Vienna in 1918.
The museum has expanded in size since its opening in 1977 and currently has 4 Hangars/halls at its disposal. A large red and white static crane, used to lower the seaplanes into the water, is still in place outside the Badoni hangar with a HU-16 beside it. 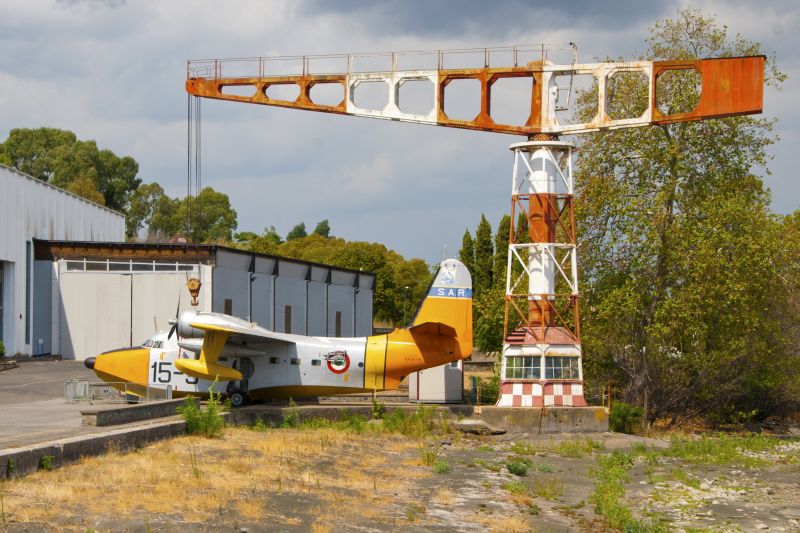 The crane with the 15 Stormo Grumman HU-16 Albatross in 2017. This is the same crane seen above. Notice how water levels have fallen in the past 60-70 years (RonaldV) 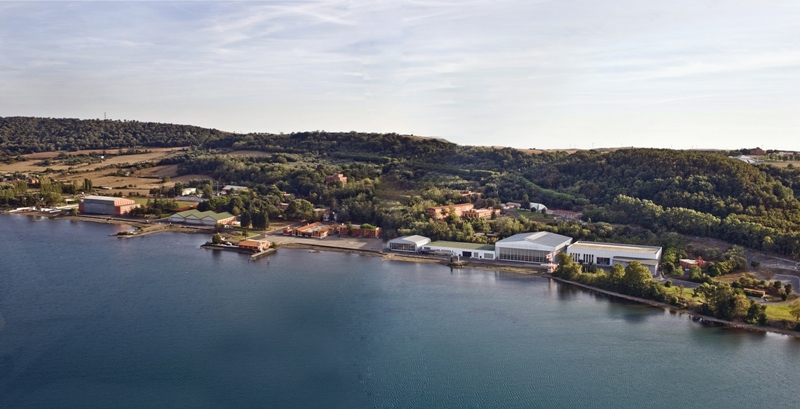 The lakefront of the former airport / museum (aeronautica.difesa.it). 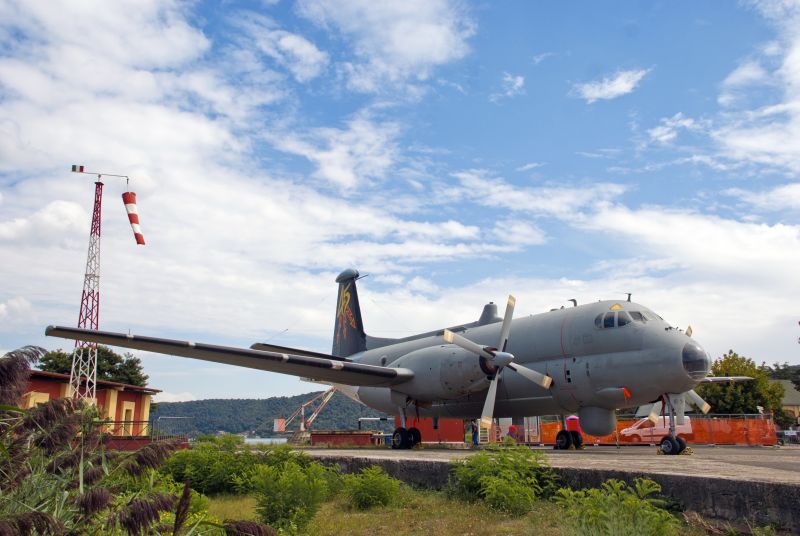 Breguet BR1150 Atlantic MM40118 of the Italian Air Force was retired to the museum on 18 October 2018. As the airfield only has the lake and helipads for takeoffs and langings, it was 'flown' in from Pratica di Mare Air Base slung under an Erickson S-64F Sikorsky Air Crane helicopter (RonaldV).