Air field Vis (Croatian: Aerodroma Vis, German: Einsatzhafen Viš (Lissa), Italian: Aerodroma de Lissa) was an airfield on the island of Vis near Split in Croatia
In 1941 Vis was occupied by the Italians, who had long standing claims on the region and call the island Lissa. After the armistice in September 1943 the island was abandoned by the Italians and power fell to the partisans of Tito. The island became the only part of the former Yugoslavia that was never occupied by the German army. The airfield was built in May 1944 and put into service that same month. Almost immediately it was already known to the Luftwaffe, who referred to it as Einsatzhafen Viš (or Lissa). Vis served as a diversion airfield for 15th Air Force bombers from the Foggia Airfield Complex during the later years of World War II. The airfield became an Allied military airfield and an airfield for the Yugoslav Partisan air force from May 1944 onwards. As a partisan air base it was home of the Escadrila zu Vezu (Headquarters Liaison Squadron).
Vis was later also used by RAF 351 and 352 Sqns (operating Hurricanes and Spitfires and also known as Yugoslav Air Force 2 and 1 Sqn respectively) between October 1944 and April 1945. 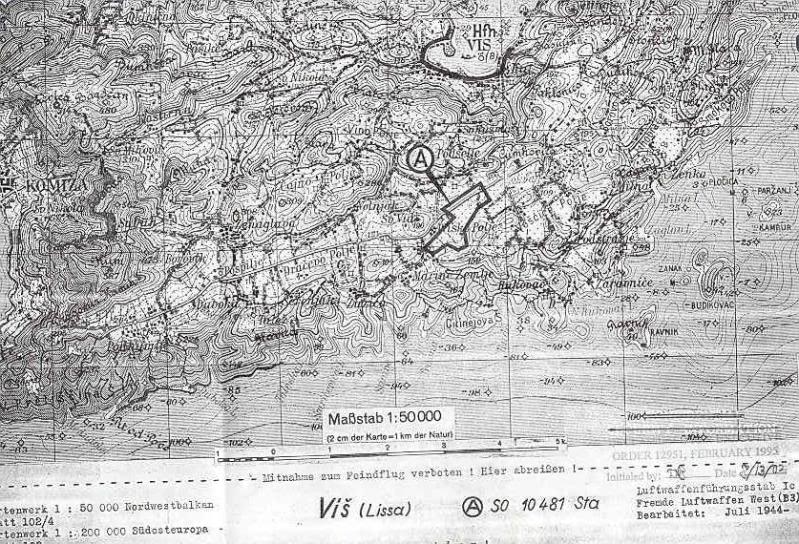 A 1944 German-made map of the airstrip and its surroundings 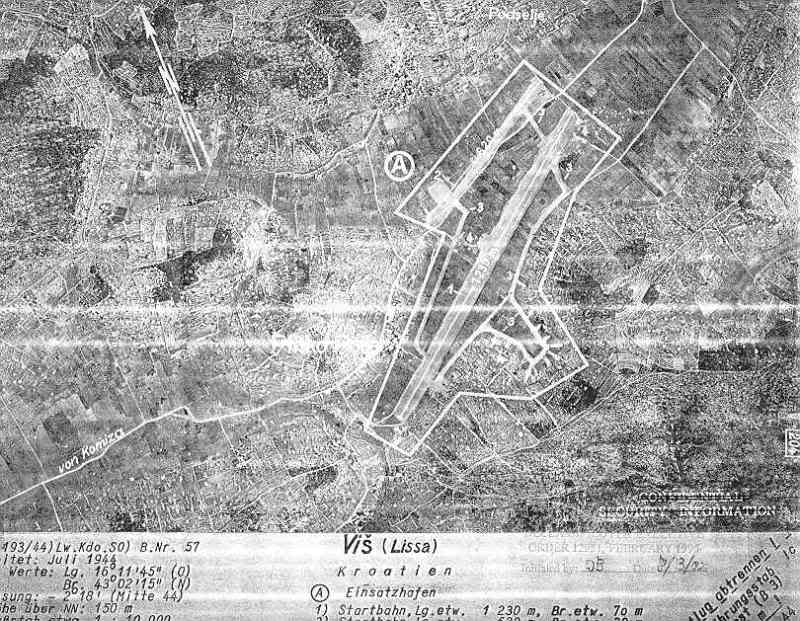 A Luftwaffe made aerial photo of Vis airfield in July 1944

Vis was soon becoming a major player in the war. Until the liberation of Yugoslavia the island served as the center of government for the partisan government (although this role was not revealed until after the war). It also became more than just an auxiliary diversion field for Allied military aircraft.
For this purpose the airfield had a group of about 10 Americans headed by a USAAF captain (S.R. Keator) along with RAF personnel who were to look after crews and repair their aircraft. Aircrew in distress that might not be able to cross the Adriatic were to divert to Vis. War damaged aircraft were hard to control however, so many crashlanded on the airfield and had to be cut up with axes to clear the runway. The operation at Vis alledgedly saved hundreds of aircraft and the lives of several thousand men. On a very hectic day in 1944 37 B-24 Liberators crash landed at the little airfield, sometimes at the same time and from opposite directions. Sometimes aircrew would have to bail out because of the many wrecks on the runway blocking their emergency landing.
Captain Keator was a very 'hands-on' man, who didn't like to waste time on writing reports. According to 456thbombgroup.org, he didn't have a typewriter, nor a file cabinet. "We don't need them," he used to say."If I had a typewriter, I'd have to type reports, and if I wrote reports, I'd have to file them. We'd rather fix airplanes." Which is exactly what he did, and he ran his outfit well.
For the morale of the B-24 crews, knowing that a landing strip and medical attention was there on an unsinkable island in the Adriatic, was extremely important. 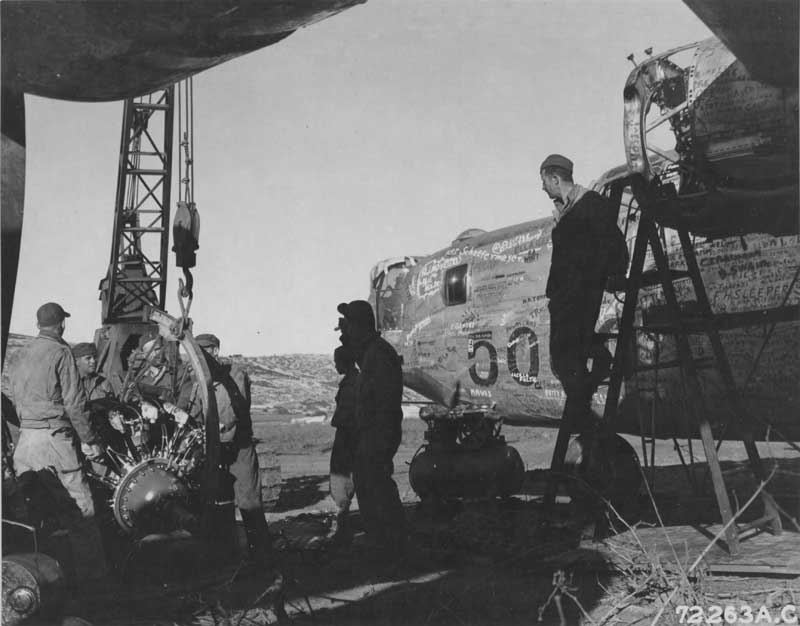 One of the noteworthy aircraft to divert to Vis was the 5000th B-24 built. It is seen here, with the autographs and the number 5000 still on its side, undergoing an engine change (Coll. Doug Sheley) 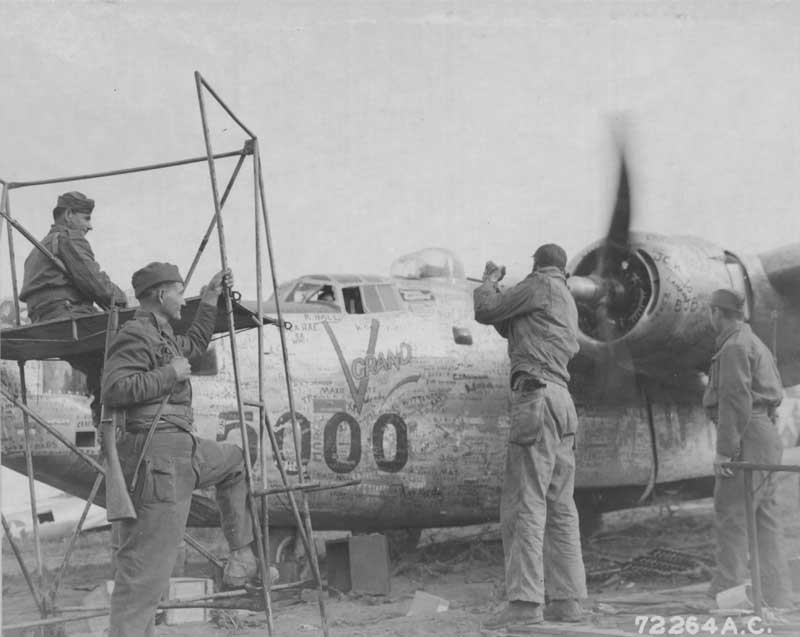 Engineers and Yugoslav guards watch as the replacement engine for the 5000th B-24 is making a test run at Vis island (Coll. Doug Sheley).

Aerial photo of a busy Vis airfield in 1944

One of the pilots who used the emergency facilities was George McGovern, a B-24 pilot who later earned fame as a US Senator and Democratic presidential nominee. On a December 20, 1944 mission against the Škoda Works at Pilsen, McGovern's plane had one engine out and another in flames after being hit by flak. Unable to reach Italy, McGovern was able to land his plane on Vis. Although its short runway had killed many of the bomber crews who tried to make emergency landings there, McGovern successfully landed, saving his crew and earning him the Distinguished Flying Cross. 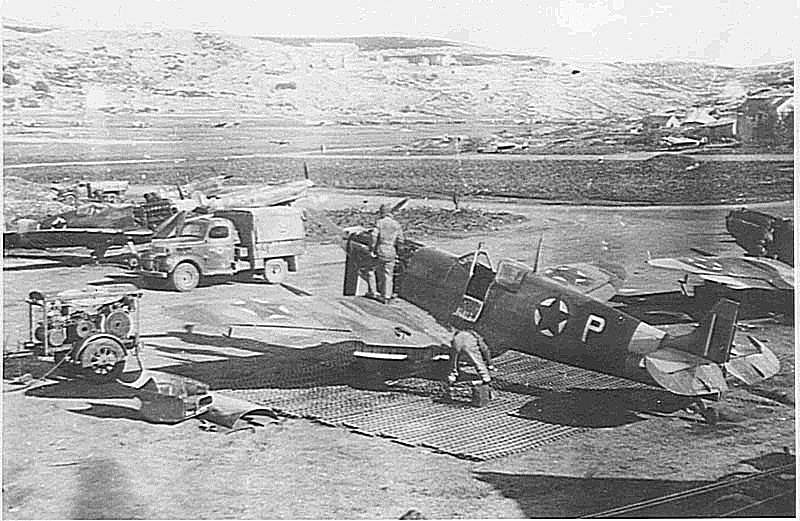 After the Germans had moved north in Yugoslavia, the repair crews were moved to a location on the mainland called Zara (today known as the Croatian city of Zadar) in February 1945, along with the RAFs 351 Sqn. Due to its strategic location the island was closed to foreigners, and largely converted into a military installation.
The airport remained in operation until 1959 and its remaining infrastructure was removed. It was returned in its original function, a vineyard. The island ultimately got more than 30 military facilities, including an underground tunnel, a military hospital and shelter for warships.
This situation lasted until 1989, although the Yugoslav army did not fully leave the island until 30 May 1992, nearly 6 months after Croatia became an independent state. That year, a project to connect the coast and islands with small airports was initiated. As part of the project, a comprehensive plan was made, with a paved runway and a control tower, which was estimated at 12 million German marks. In 1994, Vis was visited by then Prime Minister Nikica Valentić. During the visit, he suggested that Vis airfield would be reopened, but the leadership of the municipality of Vis opposed the idea, and the government abandoned the project.

From aerial photography (Google Earth) the location of the runway remains visible. If you know what to look for you can also see it on the ground, especially because red/white columns have been erected along the outlines of the former runway. A memorial and a commemorative bench (presented by surviving RAF personnel) are located close to the former airfield.
Around the island many wrecks of Allied aircraft still litter the sea floor, some in a remarkably good condition.
They are a popular diving attration.

Monument to the Allied aircrews on Vis (source). 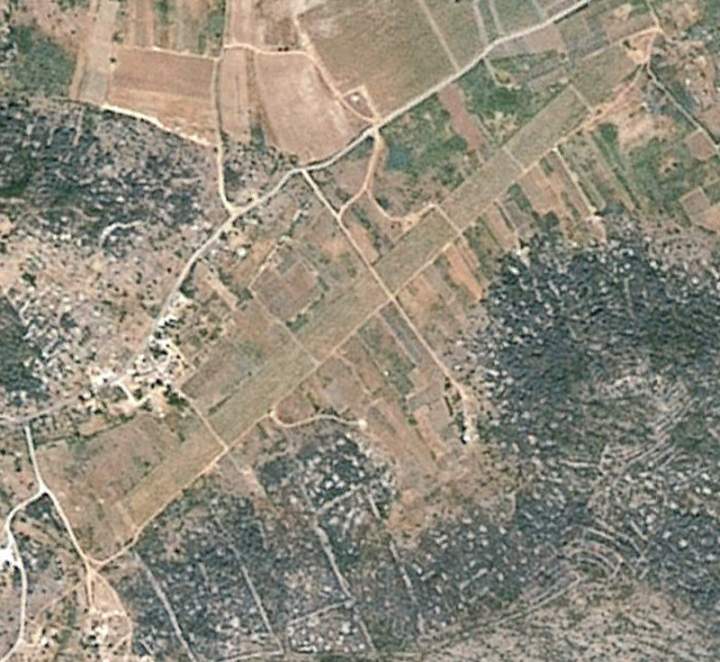 The runways' outlines are still visible in this aerial view of Vis in 2003 (Google Earth).

In 2009, an initiative to revitalize the airfield was launched when it became known that the lands were about to change ownership. In the spring of 2017, the project was implemented. Under control of the Rijeka Airport authority, a runway was laid out at 799 meters long, so small planes up to 5.5 tons and with up to 20 passengers can land without problems after gaining permission from Rijeka to fly into the airfield. 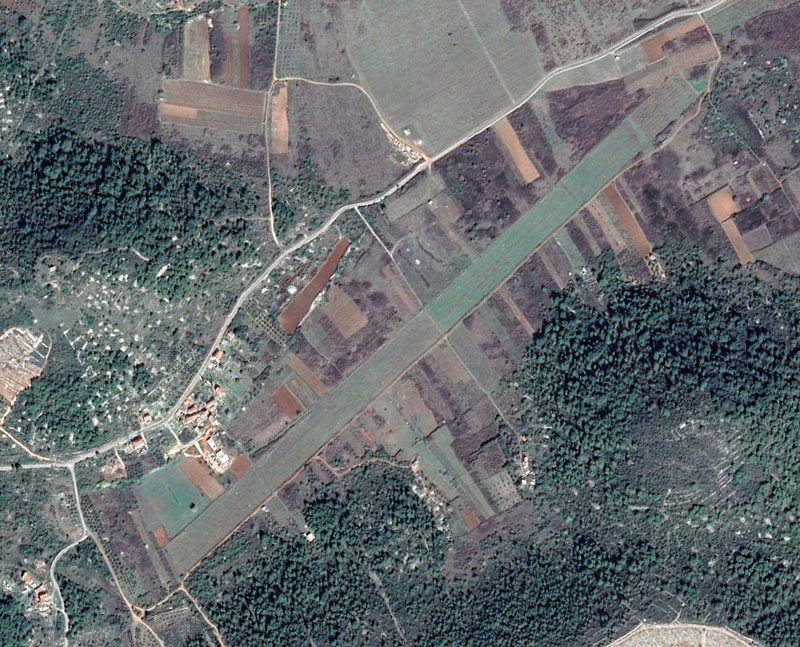 The new runway at Vis in February 2019. Although it is officially an airfield, it is only an ubncontrolled grass runway with white markers.

'Hvala' to Danijel Frka for clearing up some details on Vis!