48°25'44"N 004°28'49"E
runway: 10/28 - 2550x45m/8038x148feet - concrete (CLOSED)
runway: 10/28 - 2450x45m/8038x148feet - concrete
Air field Vitry-Brienne (french: Aérodrome de Vitry-Brienne, also known as Base Aérienne Vitry-Brienne or Vitry-Brienne Air Base, ICAO: LFFN) is an airfield 85 miles east-southeast of Paris, France
The airfields history began in 1950, when in the early years of the Cold War, NATO recognised it had several problems when attempting to solve the air power survival equation. Planning for first strike survival in both conventional and nuclear wars had to be considered. NATOs primary operating bases were built on relatively small parcels of land with very limited dispersal space. Therefore it was decided to build extra bases in preparation for an emergency (war). One of the selected locations was Vitry-Brienne.
NATO intended the base to be a main United States Air Force operating base for USAFE and construction began in 1953. Brienne Air Base was designed for 3 squadrons (totalling about 50 fighters) and had three large hangars constructed. Next to its runway was a less wide concrete taxiway that could be used as an emergency runway. However, because the USAF could not decide what type of wing should be assigned there, it was decided in 1956 to use the nearly completed facility as a Dispersed Operating Base (DOB) for the 48th Fighter-Bomber Wing at Chaumont-Semoutiers Air Base, to be used in the event of an emergency. 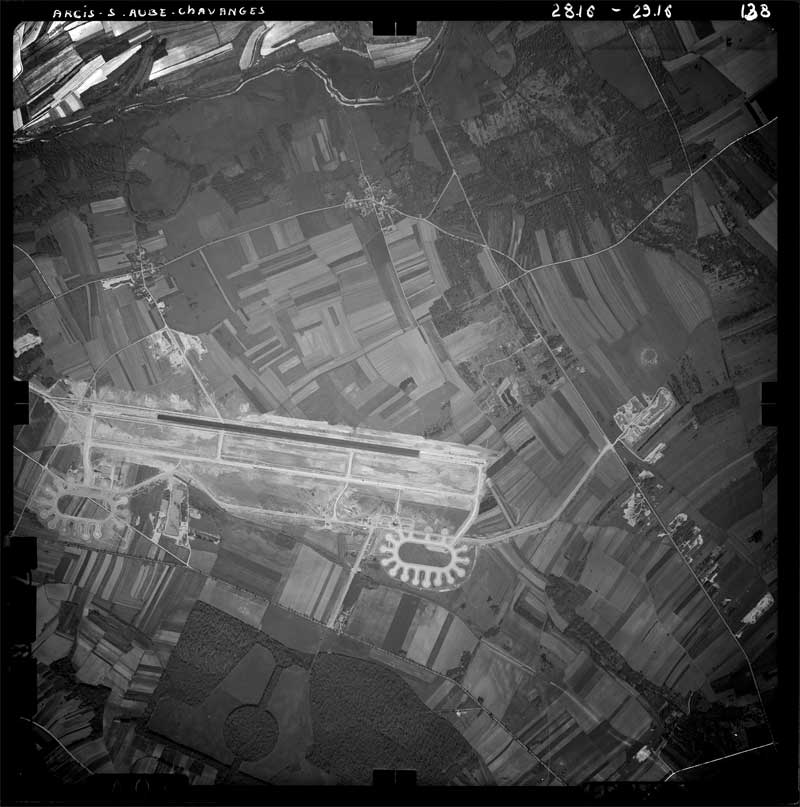 Vitry under construction in 1951. Construction of the northern 'marguerite' has not even begun yet, nor has the construcition of the logistics site. Clearly absent are the small lakes that today dotter the landscape north of the centerline of the runway. In part they were dug to create building material for the airbase, as can clearly be seen on the east side (IGN, via geoportail.gouv.fr).
Although USAFE never had any flying units permanently assigned to Brienne and it was used for dispersal training only, it did require the same level of equipment as a standard air base. The northern dispersal for instance, had a firing butt built to allow the resident units to align the cannons of fighter(-bomber) aircraft. NATO (US) security personnel were required to control base access, guard equipment, munitions and supplies stored on the facility, as well as prevent vandalism. Det #1, 48th Air Base Group from Chaumont AB was designated as host unit on 1 May 1958 and the facility was used for the first time by 48th FBW aircraft starting in September.
The base was deactivated only a year later, on 25 October 1959, and the facility was maintained by 7544th Support Group from Chaumont AB until September 1961. It was then transferred to the United States Army who turned it into an aircraft depot for helicopters such as the H-19 Chicasaw, H-21 Shawnee (or "Flying Banana"), H-34 Choctaw and H-37 Mojave. It also handled light aircraft, such as the L-19 Piper Cub, L-20/U-6 Beaver and U-1A Otter. 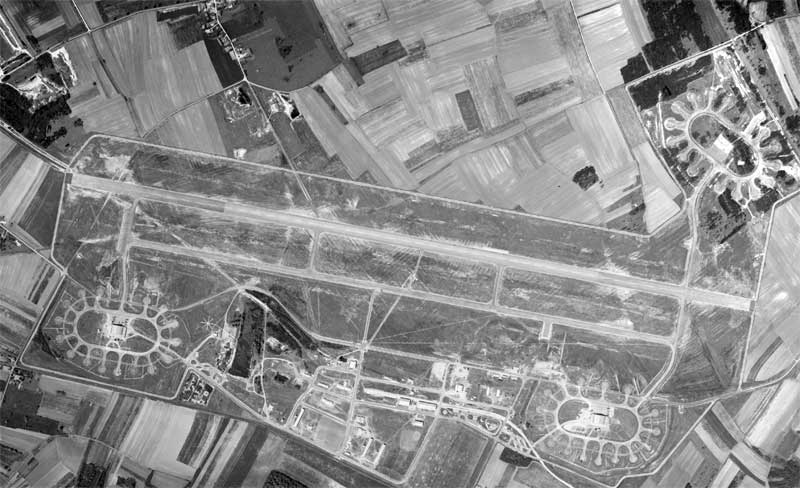 8 US Army light obervation aircraft are visible in this May 1962 photo of the former airbase. remarkably, the hangar that was built on the northeast dispersal had already been taken down by this time. The firing butt was located on the extreme north with the aircraft parked on a small taxiway opposite the taxitrack to the oval of the northeast 'marguerite' (IGN, via geoportail.gouv.fr)

The US Army turned over the base to French control on 24 June 1965. The French military appearantly had no use for it, because in 1970 it was purchased by the Brienne Chamber of Commerce and later sold to private developers. The approach lights, that were still present in 1975 photography, were no longer visible in 1986. Over the years, it has been used by various groups for sports aviation, sky diving and glider flying. Additionally, a small aviation museum had been established in the old USAF hangars, but unfortunately that had to close in 2010. 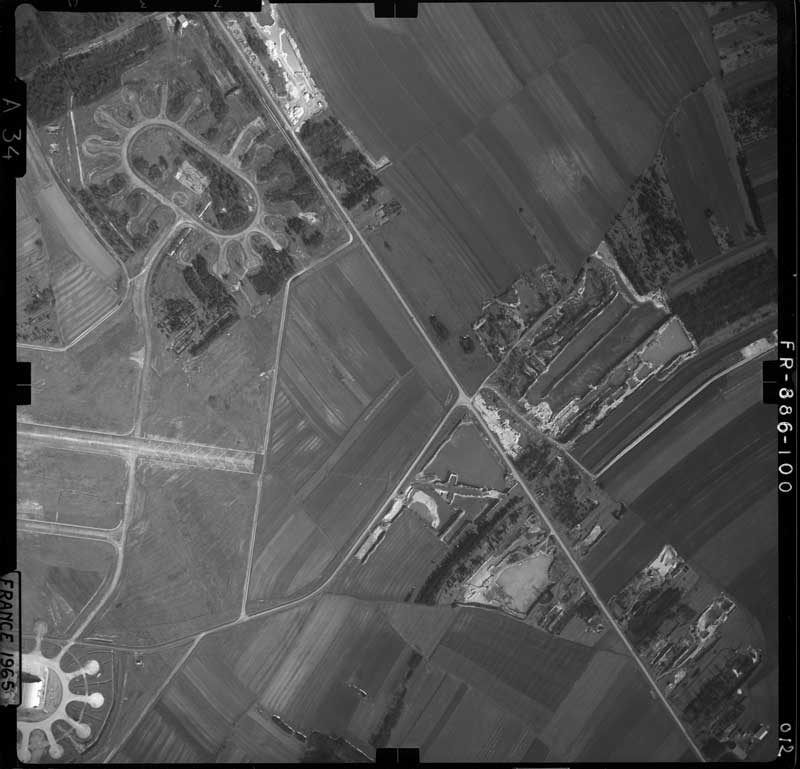 This photo, shot in March 1965, a few monhs before the US transferred the airfield back to France, shows several important features of the airfield. Especially on the original enlarged photo there is a lot of detail to be seen. From the top down: the firing butt on the northeast dispersal site, still in its original state. Then the approach lighting, which was only installed on this side of the runway. And finally: the only known image of the second hangar that was built by the US Army on the southeast dispersal. The Americans left only 3 months later. The original photo can be found on Géoportail.

In 1969 the airfield had been under French control for 4 years and the second hangar on the southeast dispersal had already been removed (IGN, via Géoportail). 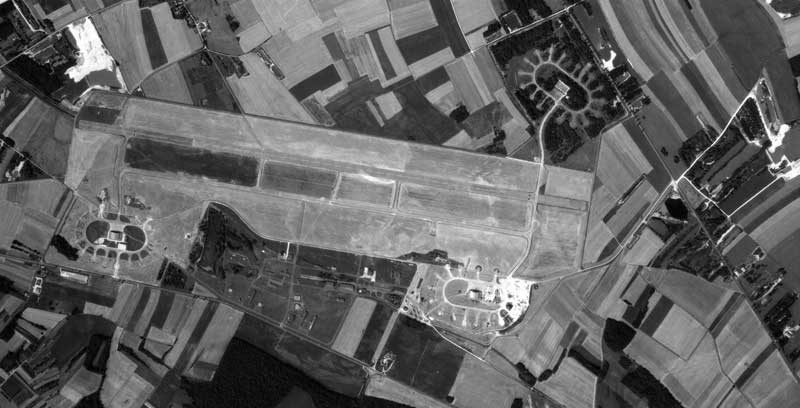 In the hi-res version of this 1975 photo a small sports aircraft can be seen taking off, flying over the treshold of 28. On the northeast dispersal, somebody painted '407 CLT' on the platform, and the southeast dispersal is being used to store soil (Géoportail). 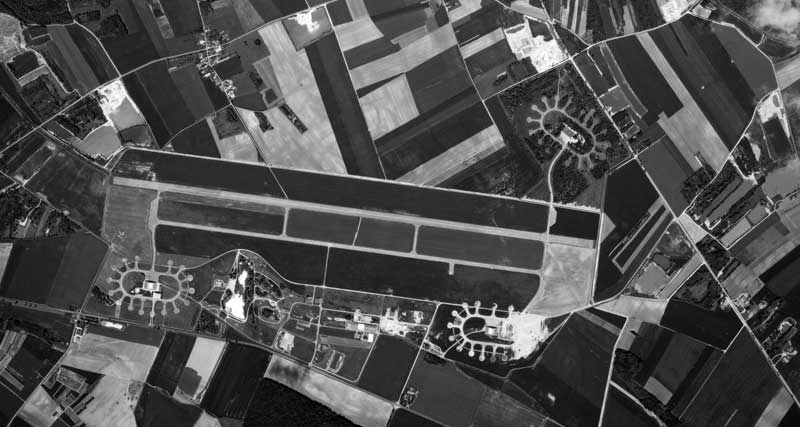 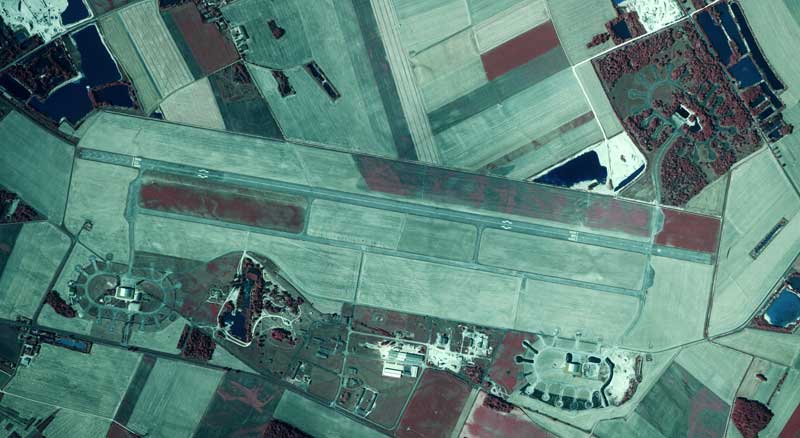 In this 1990 IR photo, most changes have (again) occurred on the west side. The displaced treshold on the west side has been returned to its original position, just before the overrun. A second hangar was built on the west side of the southwest dispersal. There appears to be a lot more activity at the airfield: a 750m grass runway was laid out parallel to the hardened runway, seemingly for use by gliders. New markings had been painted along the entire length of the runway, including a large 'X' on the east overrun (Géoportail).

Other than a cleanup of the southeast dispersals, nothing had changed by the time this 1995 photo was taken (Géoportail). 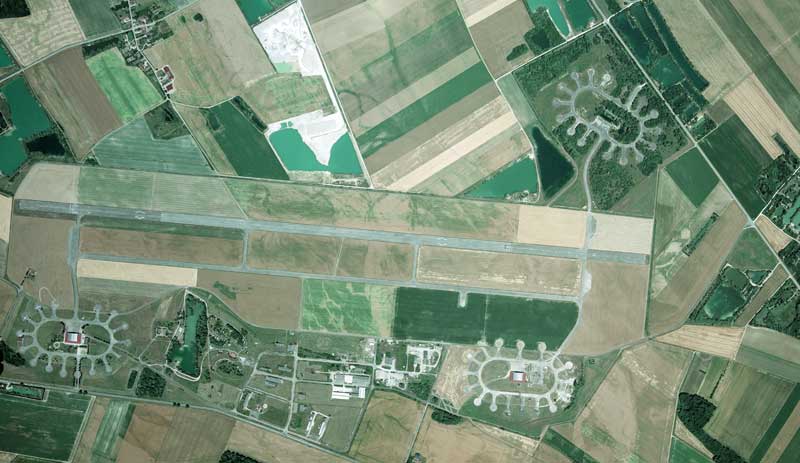 In 2000, the cleanup of the southeast 'marguerite' was complete and the aviation museum still had its aircraft parked on the dispersals on the other side of the airfield (Géoportail). 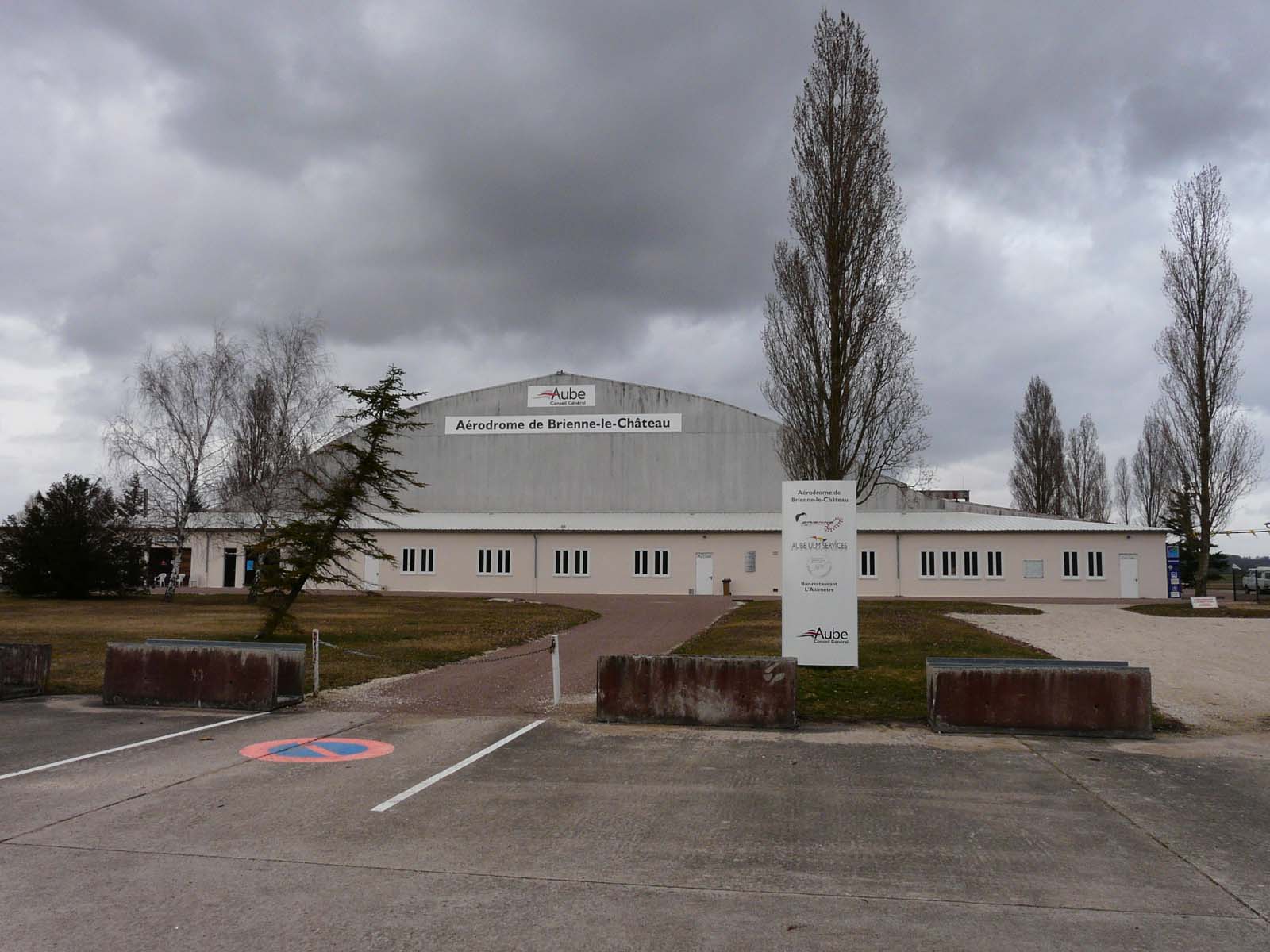 Former American hangar in what appears to be a good shape (source). 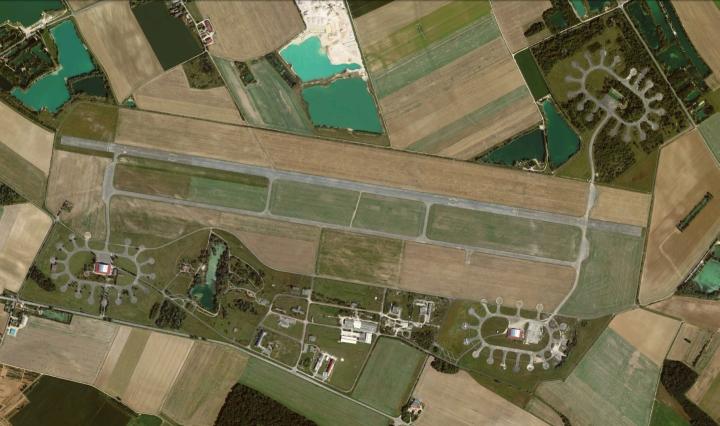 Vitry Brienne in 2005. The aircraft of the museum were all parked on the southeast dispersal (Google Earth).
The abandoned Neptune and Noratlas are being readied for a better future in the spring of 2019. Over the previous years, they had been the subject of many UrbanExplorer photo sessions.
contact us about this airfield