Airfield Waalhaven (Dutch: Vliegveld Waalhaven, also known as Rotterdam-Waalhaven) was an airfield on the south side of the Nieuwe Maas in Rotterdam.
It was opened on 16 July 1920 as the first European airfield strictly for civilian use. Initially it was just a drainaged field made of dregded up sand, with no runways. The aircraft that used it were converted military planes. The first Dutch all air-cargo flight left from this airfield in 1924. 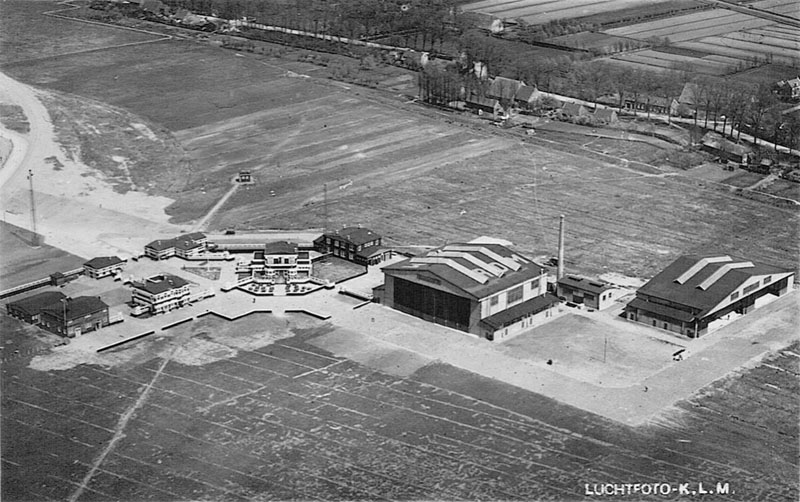 Undated, but early photo of Waalhaven. Notice the three letter code RDM (RotterDaM) on the roof of the main hangar. 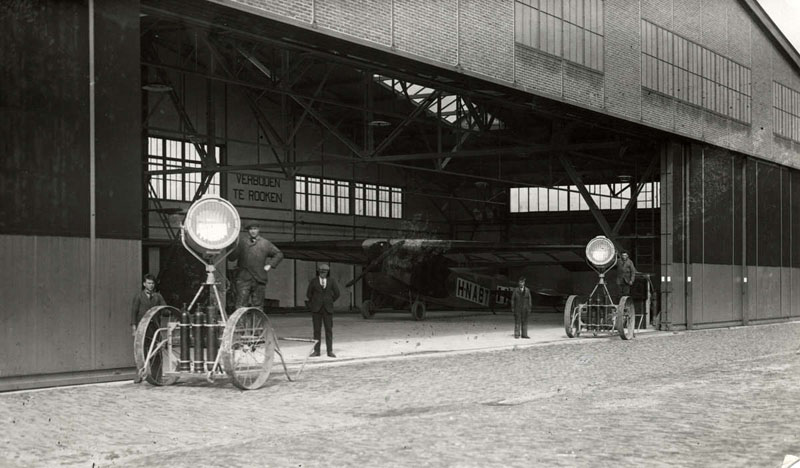 Waalhaven hangar in 1922. Inside is Fokker F.III 'H-NABT', which was involved in an accident in Hythe (UK) in May 1922. The registration was cancelled the following month and after  it was shipped back to Waalhaven. H-NABT was dismantled at Waalhaven in 1927. The sign on the wall reads "Verboden te rooken" (smoking prohibited) in pre-war Dutch spelling. 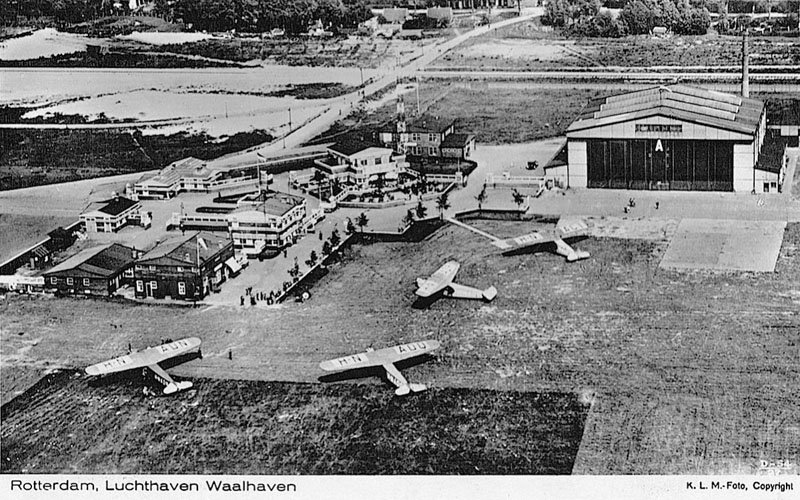 In the 1930s the airfield became a major hub in the air routes to London and Paris. Waalhaven was also home to aircraft manufacturers Nationale Vliegtuig Industrie (NVI) and NV Vliegtuigenfabriek Koolhoven. In 1932 the Graf Zeppelin visited airfield Waalhaven. Because of it's proximity to the Rotterdam harbour Waalhaven also accepted flights from waterplanes and flying boats. For this purpose a pier was built into the Waalhaven dock.

By 1935 passenger flights appeared to develop favourably, so a station building and control tower were pressed into service. Unfortunately at the same time KLM decided to move its technical center to Amsterdam Schiphol that same year The next year the timetable showed only one flight per day to London, whilst four left from Amsterdam. It became necessary to modernise if Waalhaven wanted to keep playing on an international level. Longer runways were needed to cope with larger aircraft. It was thought to be better if Rotterdam invested in a new airfield north of the city in the polder Zestienhoven. The city council was not opposed to the idea, but the real push came when the MoD declared it was willing to buy the airfield for 1.1million Dutch Guilders. A deal was struck that allowed civilian aircraft to operate from Waalhaven until the airport at Zestienhoven was completed. In 1938 the MoD bought the airfield. 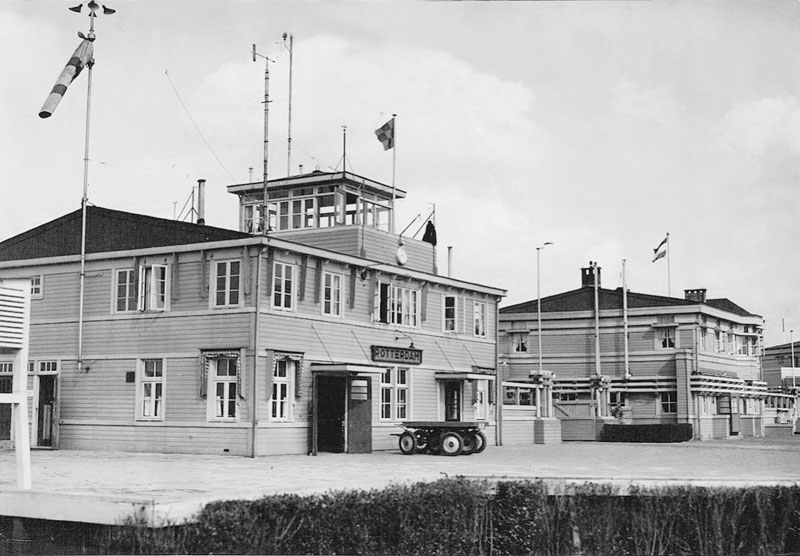 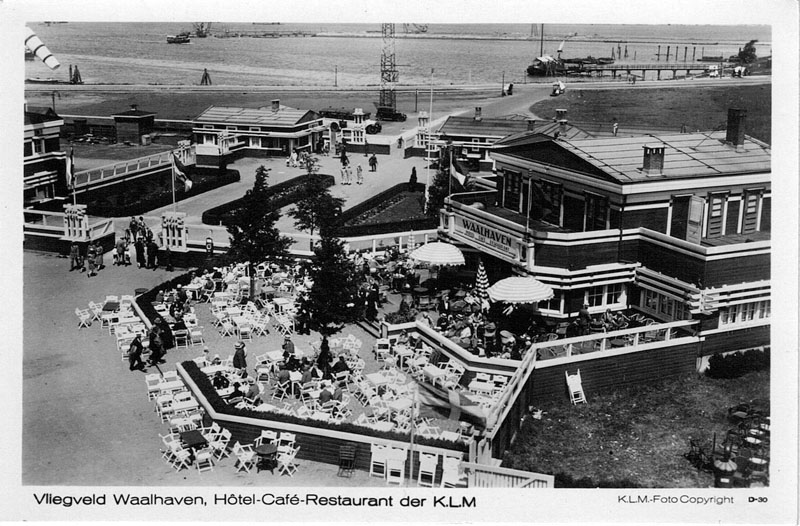 Waalhaven airfield, the hotel-café-restaurant of KLM. The actual Waalhaven dock can be seen in the background. 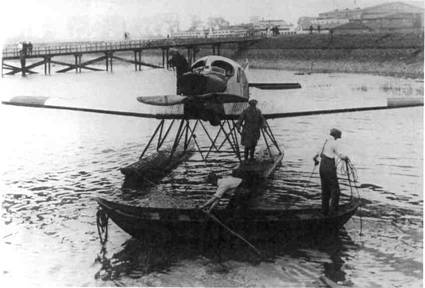 Airfield Waalhaven and a DC-2 at night in the 1930s 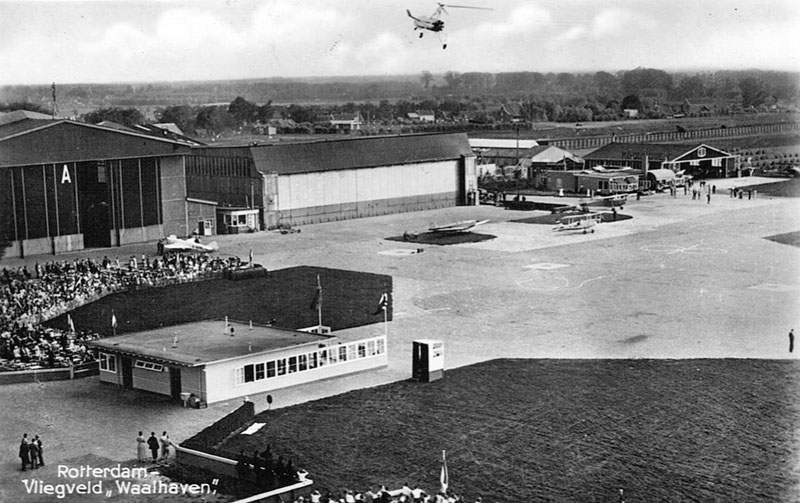 What appears to be a Cierva C.19 flies over the crowd and a significatly enlarged platform at Rotterdam-Waalhaven airfield. What appears to be a DH Tiger Moth can be seen on the platform, with a Miles Magister behind it in the grass, dating this photo to 1937 or later. 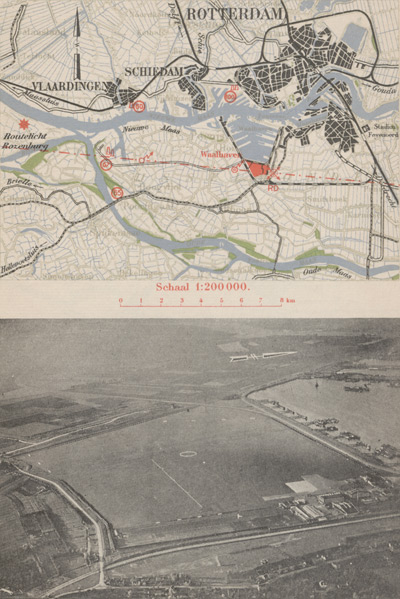 Before the deal was completed mobilisation was declared. Waalhaven was completely taken over by the military, and closed to civilian air traffic. Even worse: part of the inventory of the civilian airport was brought to Schiphol.
On 30 March 1940 KLM proposed a deal with the Rotterdam Chamber of Commerce: KLM would open a daily connection to England if the Chamber guaranteed a number of passengers. The flights would leave from a strip of land on the airfield that was cleared for civilian use by the military. The deal was never concluded: on 10 May 1940 the airfield was completely destroyed, first by German and then -in a counter attack- by Dutch bombs. 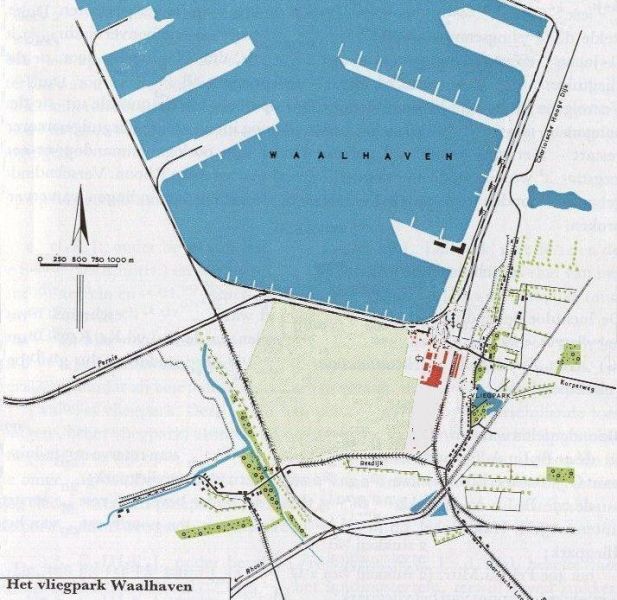 Airfield Waalhaven on the eve of World War II (10 May 1940, via Peter van Kaathoven).

On the eve of the invasion 13 Fokker G.I fighters were based at Waalhaven, 11 of which were combat ready. At 4am two Luftwaffe bombers opened the attack, first bombing and then strafing the airfield. 3 Fokkers were lost in the raid and most of the buildings were burning. The other 8 Fokkers went airborne and found themselves in combat almost immediately.
While more bombers attacked the airfield, the Fokkers shot down 13 enemy planes, against one loss. Two of the Fokker G.I's were forced to land at Waalhaven due to combat damage, the others diverted to De Kooy, Zevenbergen and the beach at Oostvoorne.
Around 5.15am a second wave attacked the airfield, this time joined by Ju-52 troop carriers. After heavy fighting the Germans captured the airfield, killing 51 soldiers and taking some 400 prisoners (out of 700 defenders). The remaining 250 soldiers got dispersed and were not a coherent fighting force anymore. Counter attacks, both from the air and from land failed. 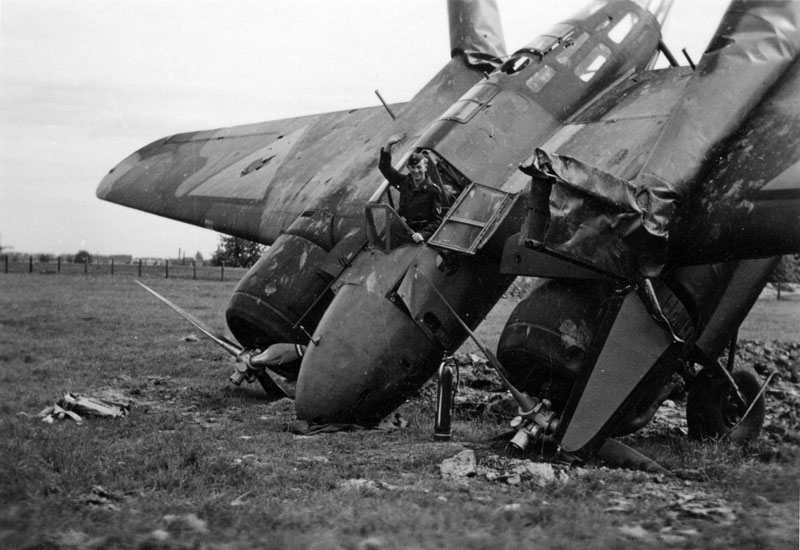 May 1940. While preparing to start, this Fokker G.1 Mercury 302 of 3e JaVA at Waalhaven was nosed over by an exploding bomb. the photo shows a jubilant Luftwaffe Gefreiter (sergeant) in the cockpit of bombed Fokker G-1 fighter '302' at vliegveld (Flugplatz) Waalhaven.
(collection Nederlands Instituut voor Militaire Historie) Airfield Waalhaven after it was bombed by the Luftwaffe in 1940 (Wikipedia/Deutsches Bundesarchiv).

Airfield Waalhaven was one of the locations for food droppins during Operation Manna (29 April - 7 May 1945). Between 29 April until 8 May 1945 'Operation Manna' took place, flown by the Allied forces. The reason was the threat of mass starvation of the population in the west of the Netherlands. In Rotterdam alone, more than 400 people per week mensen were dying in early April. This film of food 'bombings' by RAF Lancasters in Rotterdam surfaced from a house south of Rotterdam in 2011. The scenes were shot by Mr. Carel van der Zwam

Waalhaven was never rebuilt, as both the Germans and later the Dutch deemed it a total loss. After the war it became the main site of the NATO Pipeline Organisation that provided western Europe with fuel in case the Cold War would turn hot. Today, it is a regular industrial zone although the streets are named after famous KLM pilots of the 1920s and 1930s.