Wenum emergency airfield (Dutch: noodvliegveld Wenum or Wenum-Wiesel, also known as 'JOE' airfield) was a small airfield 75kilometer east of Amsterdam.
It was built/prepared by local labour with SMT matting and existed around the end of World War II, from April 1945 until at least July 1946. Two units were stationed at the airfield: 665 and 666 Sqn, both RCAF units flying Auster AOPs. There was a lot of interaction between the Allies and the locals: especially the trade of cigarettes, sugar, chocolade, cakes, etc, for local produce made for good relations.
Although both squadrons were RCAF, they were not Article XI units, and so their numbers were retained and reused by the RAF after the war. Assigned to the First Canadian Army, 665 Sqn disbanded at Wenum on 10 July 1945. Only the month before, 666 Squadron had moved from Hilversum, joining 664 Squadron and 665 Squadron at that location. 664Sqn moved to Bad Zwischenahn in the spring of 1946. 666Sqn remained at Wenum in support of 1 Canadian Army until disbandment on 31 October 1945. The airfield closed soon after.

Local farmers soon dismantled the airfield and used the SMT matting to reinforce their private driveways. Whatever remained was later confiscated by the municipality of Apeldoorn. 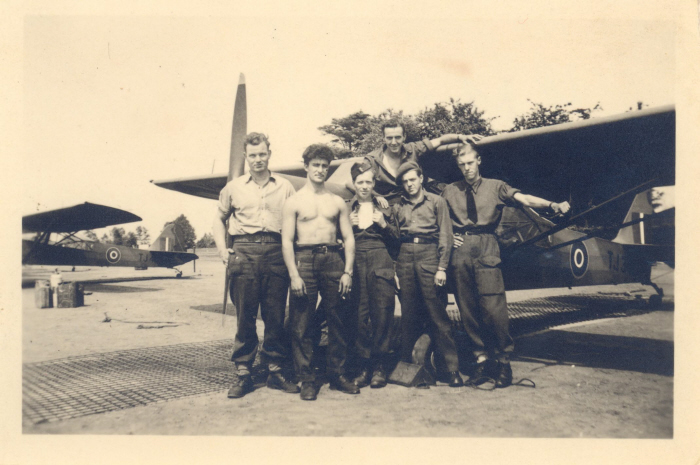 Airfield Wenum-Wiesel. Mr. Houben, on the right, was a Dutchman who worked as an interpreter and was a member of the 'Ordedienst' (security service). He and 5 Canadian mechanics are posing in front of an Auster-AOP (beeldbank Coda-Apeldoorn)

The local area has thouroughly changed. The railroad that bordered the airfield to the west has disappeared.  The west side has been transformed into an industrial area. The remainer was changed by farmers consolidating their lands.

Many thanks to Rob 'Meryl' Streep for localising the airfield and providing more useful information!