Air field Željava (Aerodroma Željava, also known as Zeljava Air base, also known as Bihac Air Base, Objekat 505 or KLEK, ICAO: pre1995 - LYBI, current: LQBI) was an air base west of Bihac in Bosnia-Herzegovina (BiH) on the border with Croatia.
The airfield was constructed between 1957 (some say 1948, referring to 1957 as the year concrete pouring began) and 1965 (1968, the year the airbase became operational and all construction was ended) at an estimated 6 Billion (6,000,000,000) dollars, 3 times the annual military budget of Serbia and Croatia combined in 2010. The airbase was constructed using World Bank money intended for the construction of motorways in Yugoslavia. An exclusive postal code was assigned to the airbase, referring to the year construction began and the year is was finished (4868). It was one of the biggest and most expensive millitary constructions in Europe, the largest airfield in Yugoslavia and one of the largest in Europe. Its role was to provide, integrate and coordinate the nation wide Early Warning radar network in the Socialist Federal Republic of Yugoslavia. It was designed to sustain a direct hit from a 20Kt nuclear bomb, roughly the equivalent of the Nagasaki bomb. It had a very strategic position and was combined with an Air Defense Radar Site and the nerve center of an advanced integrated air defense network (much like NORAD in the US, and CRC/CAOCs in western Europe). The first combat unit (117th Fighter Aviation Regiment) flew in from Zagreb Pleso airfield in 1968. Besides the main purpose of a protected radar installation, a control center, secure communications and related facilities, the air base contained underground tunnels for the use, parking, and maintenance of three complete squadrons, two fighter and one reconnaissance. These units were the 124.LAE (Fighter Aviation Squadron) and 125.LAE equipped with MiG-21 Bis fighter aircraft and 352.IAE (Reconnaissance Aviation Squadron) equipped with MiG-21R reconnaissance-fighter aircraft. 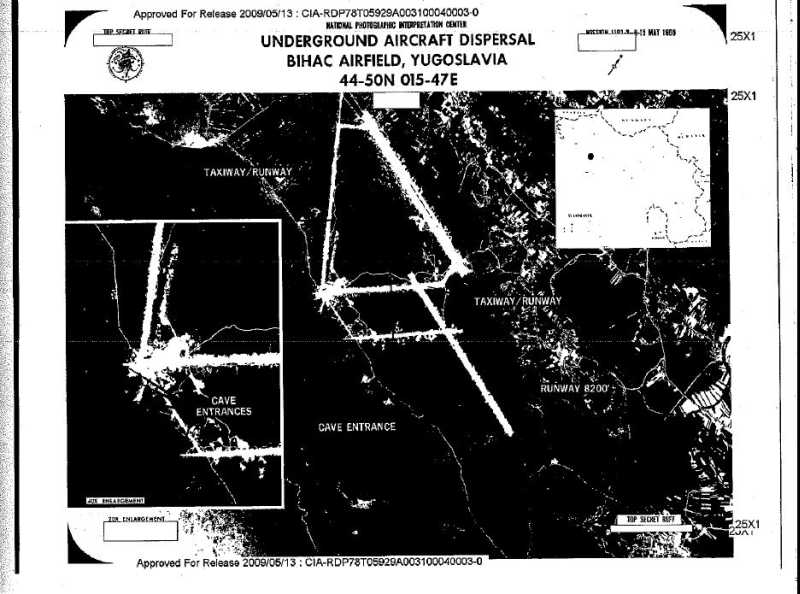 A photo of Željava, made by the CIA in 1968. The CIA was well aware of the airfield and its capablities, according to this report at zeljava-lybi.com. 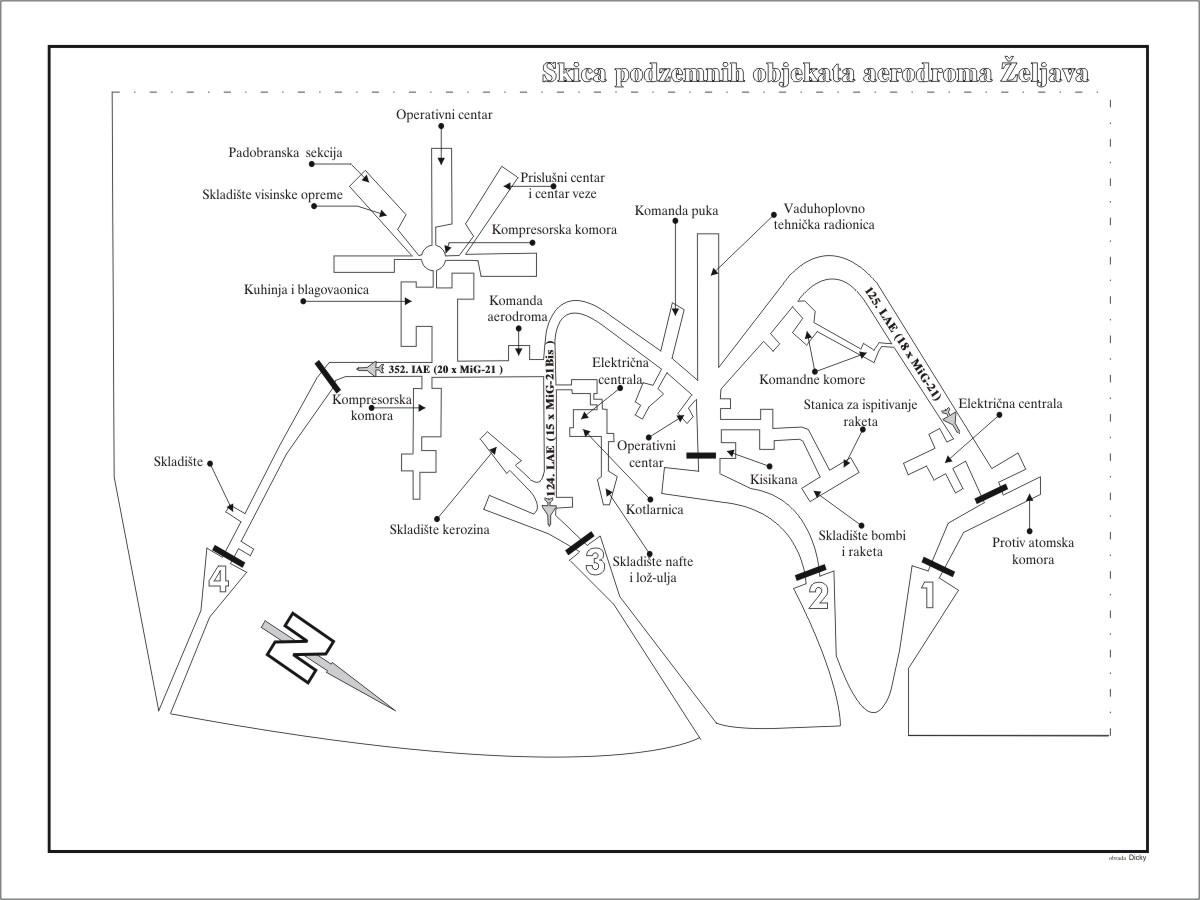 Map of the underground complex 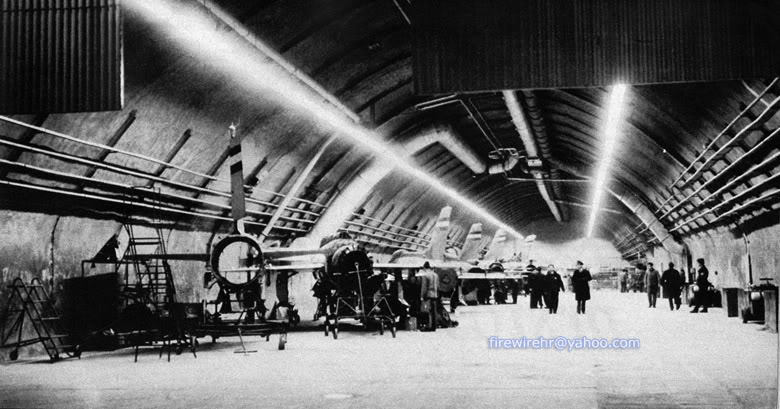 Early model MiG-21s being serviced in the Željava tunnels in the 1970s (zeljava-lybi.com). 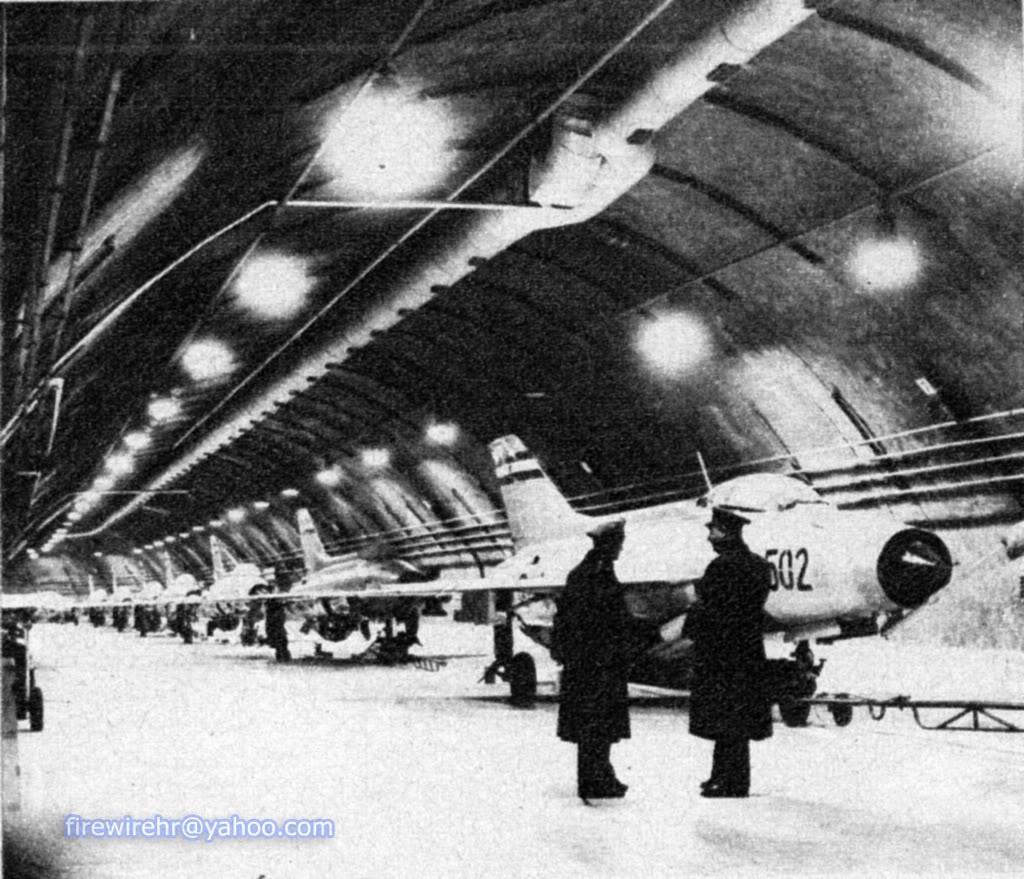 Early model MiG-21s lined up in the Željava tunnels in the 1970s (zeljava-lybi.com). 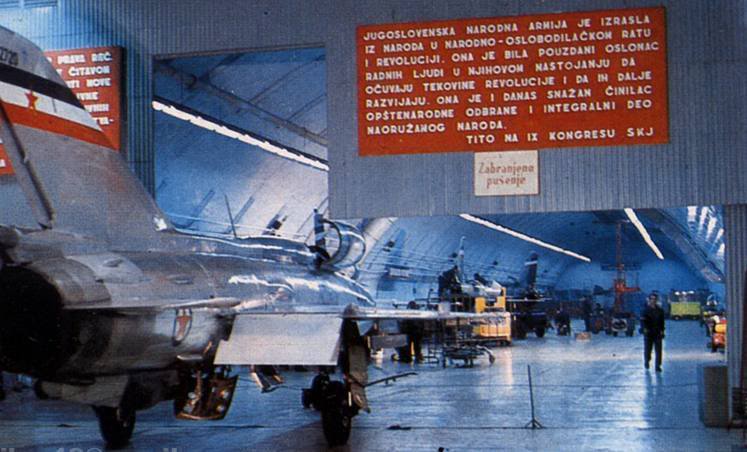 Later model MiG-21s (as can be seen from the humps on their backs) in the Željava tunnels in the 1980s (zeljava-lybi.com).

The entire air base occupied an area of 9x4 kilometers west of Bihac, where the personnel used to live. The underground facilties, known as KLEK was lined with semi-circular concrete slabs of ten meters as an extra resistance to attack weapons. It had its own water supply, power generators, crew quarters and so on which were of strategic advantage in the event of war. KLEK even had a mess hall to feed 1000 men at once and enough supplies of weapons, food and fuel for 30 days without a single resupply from outside. Fuel was supplied by pipe from a facility 20 kilometers away.
Outside the bunker complex the base had 5 runways and numerous short range radar 2K12 "Kub" (Russian: 2К12 "Куб"; NATO: SA-6 'Gainful') systems. Motorized infantry bases, military police stations, and a hunting lodge used by the country and military leadership for an occasional leisure trip were also part of the complex. Access was monitored by heavy surveillance and guards were authorized to open fire on anyone attempting to enter without authorization. In practice though, unwanted visitors were simply turned away.
At a total length of 3.5 kilometers of tunnels the complete bunker had four entrances, protected by 100 tonne pressurized doors, three of which for use by the bases' fighter aircraft. Photographic evidence shot after the war suggests that the complex was in the process of being modified to handle MiG-29 'Fulcrums' around 1990.

Although Zeljava was a MiG-21 fighter base, it also had other aircraft types on base. Three of them remain on base until this day: near the barracks area an old C-47 and two derelict F-84s can be found. Other aircraft known to have operated from the air base: 8 J-21 fighter bombers were based at the airfield in 1990, although they could not be stored in the bunkers because of their wingspan. Instead they were parked outside entrance #4. Two UTVA-66 light trainers were parked outside entrance #1. For a short time the airfield also hosted a few MiG-23 that were overhauled un Yugoslavia, but were left stranded there after the Iraqi invasion of Kuwait.
When the Yugoslav Wars broke out in early 1991 the base was extensively used. A Ugandan Boeing 707 that was used in an early attempt to smuggle 20 tonnes of weaponry to Croatia at the beginning of the Yugoslav Wars landed at the airfield. Serbian forces captured the aircraft in Zagreb and send it to Belgrade, but had it offload half its cargo at Zeljava. In April 1992, the Yugoslav Peoples Army (JNA) began to withdraw from the airfield. They destroyed the airport by filling and igniting the explosive positions that were built-in during the construction phase of the base and as part of base design.
It was from then on guarded by the military of Serbian Krajina (a Serbian puppet state in Croatia and Bosnia-Herzegovina that was in the background controlled by Serb leader Slobodan Milosevic). This prevented its use by either Bosnians or Croatians. When it became clear their positions would not be sustainable in the long run, the Military of Serbian Krajina finalized its demolition in May 1992. They set off an additional 56 tons of explosives to prevent any possible future use of the complex and preclude any advantage to an opposing party. The ensuing series of explosion was so powerful that the nearby city of Bihac shook violently for two days. Villagers said that there was smoke coming from inside of the tunnels even 6 months after the destruction. 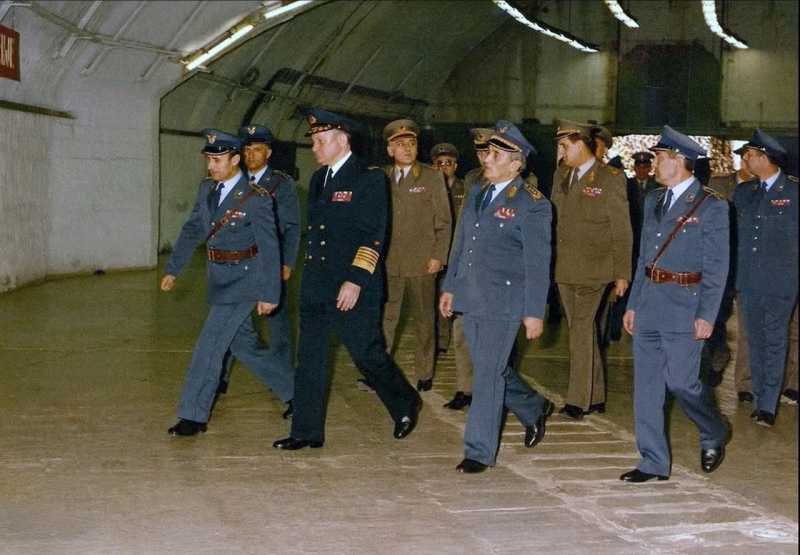 A visit of high-ranking officials to Željava in 1991. Identified were lieutenant colonel Vladeta Kostic (second from the right). First from left is the former commander 200th Air Base at Željava (name unknown) and the first on the right is Major General of aeronautical engineers Ðordije Zvicer. Second from left is Janjanin Stevo, 352 squadron commander (zeljava-lybi.com).


Part 1 of a 3 part Croat reconnaissance video series, taken during missions to Zeljava between 1992 and 1995. At the time, the region was still on the frontline of what was known as the Serb-held 'Bihac pocket'. Part 1 contains a 1992 video (appx 30 min), part 2 contains a 1993 video (appx 1 hour) and part 3 contains a August 1995 video shot during a heavy battle that ultimately led to the capture of the airfield by the Croats and the fall of the Bihac pocket. 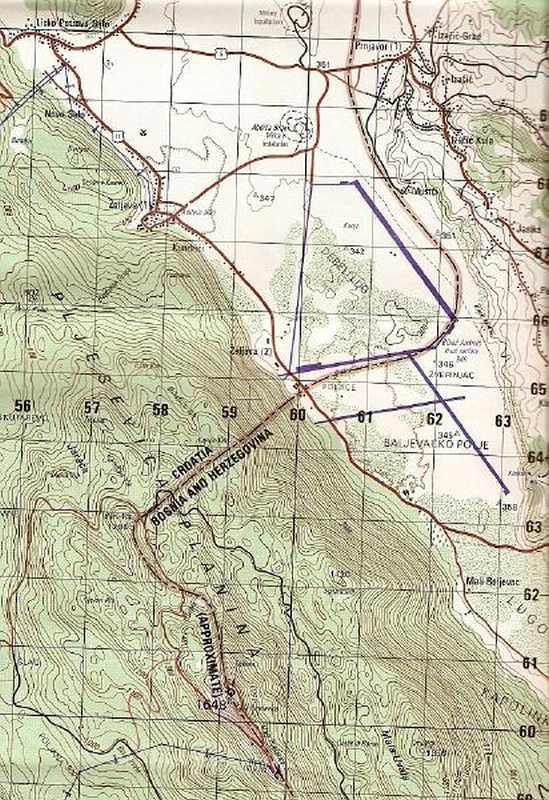 Today extreme caution must be used when visiting the Željava Airfield Complex, in view of the extensive number of landmines on and around the former air base. The local police and the CPA use the area to train dogs with the use of actual landmines due to the enormous amounts of mines that exist within the complex area. In November 2000, a Federation Air Force Major suffered a mine strike and died of his injuries sustained by the explosion of a PROM-2 anti-personnel mine after searching for mushrooms.
The amount of the destruction and devastation of the buildings and materials cannot be expressed in money and caused great environmental damage. Any idea of reconstruction on this volume is limited by a lack of necessary resources and hinderded by heavily mined lands. As an added complication the state border between Croatia and Bosnia-Herzegovina runs straight through the middle of the base. Today it serves as a location where much illegal immigration takes place. Plans for a center for asylum seekers, or a millitary training facility as part of the Udbina complex have so far not been converted into actions. The Municipality of Bihac has launched an initiative for use of the runway on Bosnian territory for the opening of a local airport, which is why the airfield has an ICAO code assigned.

WARNING! Nowadays (2010) it is possible to visit the airfield, but with Croatian Border Police permission only. Entering the field is still at your own risk (mines!) and entering the underground facility is possible, but downright life threatening. Any attempt to enter into the underground complex carries two basic risks - gases and landslides.

1. There used to be large numbers of oil and kerosene tanks. Big clouds of gases that have not evaporated during the explosions might be still inside tunnels. You are strongly advised to not bring any kind of open flame source inside, since any sparkle can be deadly!
2. During the explosions, concrete desintegrated or was severely weakened, so now it has minimal potential strength. A person weighing about 85 kilograms (an adult with minimum equipment) provides enough weigth to start moving debris and cause landslides!

If you want to enter into the underground complex, do not proceed more than 100 meters deep.  Anything deeper than that should be considered a high-risk move. Please consider that you are endangering your life, as well as the lives of the people trying to save you!
Do not be fooled by the large number of photos taken at the airfield that can be found on line. Aside from the dangers of the tunnels, the airfield is also dangerous because of unexploded mines and pollution of the terrain and tunnels with toxic chemicals such as PCBs. A final risk is the Croat/Bosniak border. The border is clearly marked with large concrete blocks and Croatian police does patrol the area. It is best to stay on their side of the border.

On Sunday 22 June 2014, Pierre from Zwitserland reconfirmed the above: "(...) i was there for the 3rd time in 4 years and today (I) was checked by two friendly croatian border policemen who were patrolling the area (...) on board a civil vehicle. They even gave me infos and indication where to drive and (where) not on the runways. As you mentioned in your commentary, going into the tunnels is very dangerous and it is compulsary to stay on concrete roads at all times, this is due to the always present and active landmines. Not to mention that crossing the well marked Croatia-Bosnia Hercegovina border is strictly prohibited and definitely not a good idea. Please adhere to. Best regards" 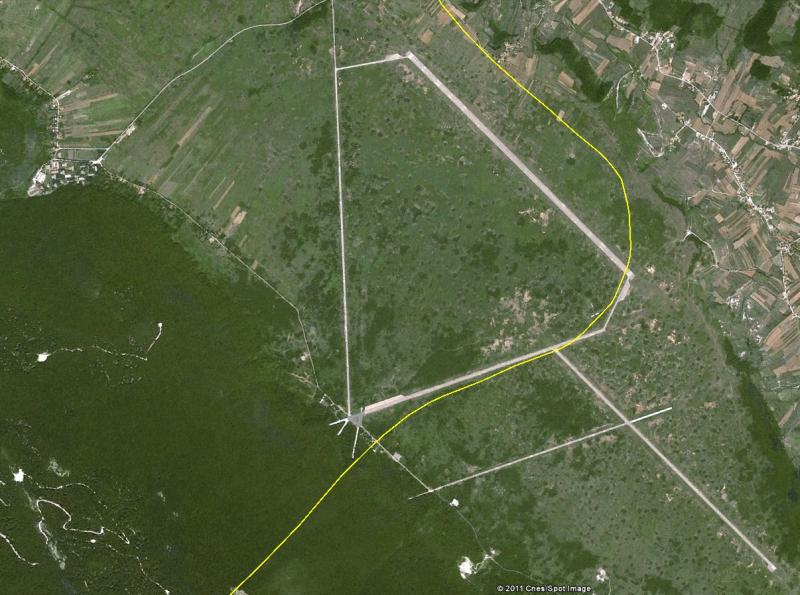 Video from the channel of Dark Footage.

An extensive overview of Zeljava can be seen at benkar.se (Translation by Google).